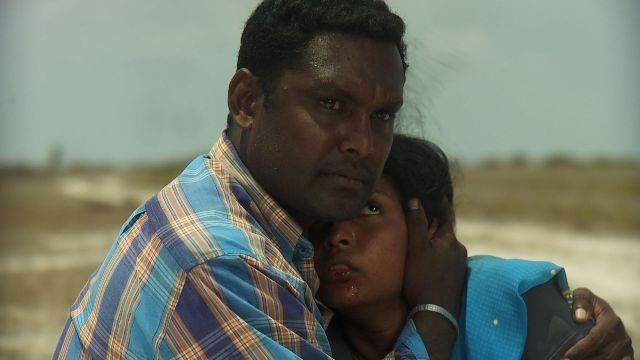 [From the film Ini Avan (Him Hereafter)]
War, more often than not, acts as an escape valve for human emotions. All the pent up anger, hatred, dislikes and vengeance are unleashed on the enemy on the battlefront. When that mechanism comes to a cessation, a different dynamic takes its place and suicide it has been said has fast become the leading contender, substituting for the destruction of the enemy. We are sure psychologists, psychiatrists and social scientists would find more nuanced answers to this complex issue. Yet one cannot simply disregard the assertions of Daya Somasundaram, Professor of Psychiatry attached to the Jaffna University that the suicide rate in Jaffna has gone up considerably in the aftermath of the three decade-long civil war in Sri Lanka.

The Professor backs his claims with statistical evidence that shows 15 suicides per 100,000 in the Jaffna District prior to 2005, climbing steadily to 23 per 100,000 during Eelam War IV (August 2005 to May 2009), to what is now more than 25 per 100,000. Incidentally Sri Lanka’s national average of 25 suicides per 100,000, which amounts to 8 to 10 deaths a day, has earned the country the dubious reputation of being placed third in the World Health Organization ranking for suicides in Asia, and 11th globally.

There is no disputing the fact that there has been an increase in the number of suicides in post-war Jaffna, and but what appears as relevant in the context of peace time developments, as articulated by the Professor to a group of Indian journalists, is that even during the 2002-2004 peace process there had been an upswing in the number of suicides when compared with the period when military operations were on-going.

This phenomenon is explained by the Professor as frustrations being better managed during the war, because there was a strong social support system cushioning the impact of various kinds of traumas and stresses. Explained further what this means is that under military siege, civilians clung together, but after the war, social cohesion and social support systems began to wear thin as families got splintered. This, coupled with economic deprivation, which continues to this day thanks to unimaginative government rehabilitation policies, the Professor believes has created not only splits in families and inter-personal issues, but also reduced the individual’s ‘social capital’, leaving him/her nothing to fall back on during stressful situations.

The individual’s ‘social capital’, the concept to which the Professor tends to attach much importance, needs to be paid special attention to, rather than disregarded as something inconsequential. The Professor’s assertion that the government should help increase the ‘social capital’ of war-affected people by restoring pre-existing social and familial networks and making these groups the vehicle of rehabilitation schemes, needs scrupulous consideration and the government may well be advised to take this emerging phenomenon more seriously than they are doing now.
People, no matter their race or beliefs, react to life’s traumatic situations in the same fundamental way. The Bible tells us that King Saul committed suicide after he was severely wounded in battle, and, history records Judas as also having committed suicide. This is not an excuse for society to shrug its shoulders and accept suicide as something that happens, as something inevitable. Rather it is a reminder that both the strong and the weak, when pushed beyond their limits will reach breaking point and will cry for help in ways society would not clearly understand. For, more often than not, an attempt at suicide is not an attempt to end one’s life, but a plea for help.

In this context, the Professor’s recommendations that ‘social capital’ of war-affected people be increased by restoring pre-existing social and familial networks and making these groups the vehicle of rehabilitation programmes, becomes important and worthy of being looked into more seriously. Whether the government policies can accommodate Professor’s theories, is something that needs to be explored, but if as a country we are really interested in a lasting resolution to the problem of high incidents of suicide, whether among the Northern Tamils or Southern Sinhalese, a consensus must be reached as to the way in which it could be tackled for the good of man. And in this respect academics and experts must be listened to and their advice taken seriously.
Editorial, Ceylon Today