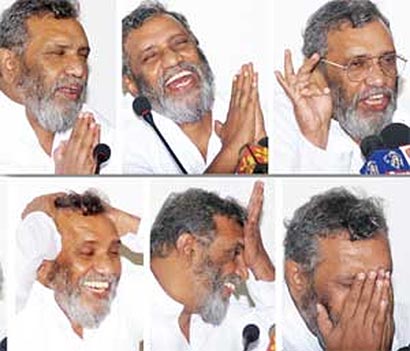 He noted that most candidates who have declared their assets are those who are contesting from the Kandy and Kurunegala Districts. Wijetunga added, they keep monitoring the work of the candidates and notify the Election Commissioner about incidents of election law violations.

He noted that when compared to previous PC elections, this time the situation was far better. “In previous PC elections, even less than 30% candidates declared their assets and liabilities. The Election Commissioner stressed that actions will be taken against candidates who do not declare their assets and liabilities even if they lose the election,” Wijetunga said.

A senior official attached to the Department of Elections said, results of the candidates who do not declare their assets and liabilities will not be published in the gazette of election results. He added, such candidates will not be able to swear in as PC members, even if they win the election, if they have not declared assets.

Meanwhile, more than 1,500 public officials and other staff are being used by the candidates contesting the PC elections, either directly or indirectly, for election propaganda work, TISL revealed.

In the guise of being called up for meetings or rallies, they are being used for propaganda campaign work directly, it was revealed during the investigations carried out in the past few days. TISL noted, most of those involved are from the Samurdhi Authority, Road Passenger Transport Authority, National Livestock Board, Co-operative Wholesale Establishment (CWE) and the Department of Education. In addition to that, vehicles belonging to the aforementioned departments and other public property belonging to the institutions are also being used for propaganda activities.

“The Samurdhi Authority has given approval to send four Samurdhi Development Officers to the Northern Province on the pretext of carrying out official work from 6 September. Four official vehicles have also been allocated. It is reported that they will be used to organize election campaign work of UPFA candidates. The four District Development Officers are from Samurdhi offices in Ratnapura, Badulla, Trincomalee and Ampara. They are due to be sent to Jaffna, Kilinochchi, Mullaitivu and Mannar Districts. The numbers of the allocated vehicles are 253-6269, 252-5647, 58-7948 and 58-7947. They will also be given the necessary quota of fuel,” Wijetunga alleged.

According to TISL, 85 Samurdhi Officers and graduates had been invited to an election meeting of candidate Yohan Fernando held at Panduvasnuwara on 28 August. Reportedly, these public servants had been given official leave on the basis that they were attending a Deyata Kirula programme, but Election Department officials had later cancelled the meeting.

It is also alleged that a ceremony held on 25 August 2013 to commemorate the anniversary of the Union of Smurdhi Development Officers and Managers of the Matale District at Matale Town Hall had been used as an election propaganda meeting. Several UPFA candidates had used the opportunity for their propaganda work. Deputy Minister of Education, Nandimitra Ekanayake, had made a written complaint to the Returning Officer.

The Matale District Coordinating Committee Chairman’s Office is also functioning as an election propaganda office. Although this office is kept closed during an election period, it was observed by the PPPR team that this time correspondence work of several candidates is being done there.

Most of the incidents of the use of vehicles and staff belonging to the Road Passenger Transport Authority relate to the Central Province Office. There have been complaints that even the Central Province Road Passenger Transport Authority Chairman’s official vehicle is being used for election propaganda work of his son who is contesting in the Nuwara Eliya District as a UPFA candidate. It is also observed how bus inspectors are involved in election propaganda work in the Nuwara Eliya and Hatton areas.

Public property belonging to Sri Lanka Transport Board (SLTB) is being used in numerous ways for election propaganda work. Buses plying along three new routes from the Matale District carry the name of Parakrama Dissanayake, (brother of a Deputy Minister), who is a UPFA candidate contesting the Matale District. The cab bearing number 252-5002 belonging to the Education Ministry and the Higher Education Deputy Minister’s Private Secretary’s official vehicle WP 7618 are being used for election work of Matale District UPFA candidate Chinthaka Ekanayake.
CT