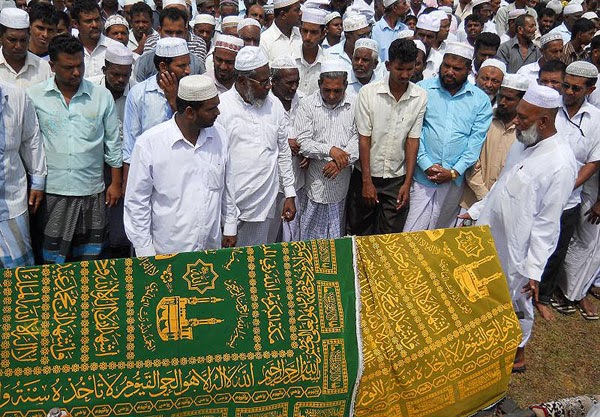 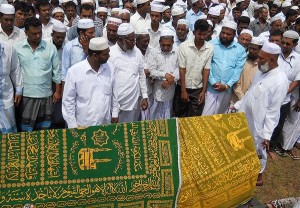 He got disappeared on 11th Feb.2010 in Polonnaruwa, while engaging in an official duty in his trust. Mr. Razeek was last seen getting into a van with some persons, who had parked their vehicle closer to the Jumma Mosque at Kaduruwela, in Polonnaruwa having informed his colleagues who came with him that he was travelling to the Valaichchenai town, in the Eastern Province.
Mr. Razeek has not been seen or heard from since. Shortly afterwards, Mr. Razeek family received a few calls from Mr. Razeek’s mobile phone number, demanding large amounts of money to secure his release. Then the calls stopped.
For his son Razeek Rizkhan Mohamed, the ensuing years have been a tedious process of waiting and suffering. Not only Rizkhan but his four sisters and younger brother along with their dear mother still are suffering without their dear beloved father and dear beloved husband.
It was quickly established that Pattani, a rights activist and civil organizer, was abducted and later murdered. Police, in Kavaththamunai, Oddamavadi,Valaichenai in an Eastern Province area discovered his body and exhumed it on 29th of July 2011, after a lapse of one and a half years after the abduction. But the investigation has made little progress since.
After exhumation of Razeek body, the post-mortem was completed on 2nd August 2011 and the body was released to the family on the same day. The DNA testing samples and other testing were carried out by the government Analyst and other responsible officers. Razeek family fully corporate with the Police for investigation to seek justice for him.
“After years of waiting, we still have not obtained justice for my father, court case (M.C.92264) still going on at Polonnaruwa, Magistrate Courts. Even a date had been fixed on 10th February 2014– one day before the fourth anniversary of my father’s disappearance – the court heard a case against two suspects allegedly involved. Police had not issued a death certificate, since then after two and half years of finishing the autopsy.” Rizkhan said.
“The key suspect, Nowshaadh has been released on bail and converted to a crown witness. Now the other suspect Musdeen is also released on bail and the third one, Ameer who is absconding from court from the beginning is yet to be arrested. We have lost all hopes of justice,” he said.
“Our family and witnesses to the case do not have any protection though it is an urgent responsibility of the state “he said.
The family, as well as former colleagues and fellow activists, have complained of long delays in the courts, police inaction in the investigation and the release of key suspects in the case, including Shahadbeen Nowshaadh, who police had initially linked to Razeek through the ransom phone calls to the family.
He was remembered much due to his tremendous services rendered to the fellow citizens during the Tsunami debacle that hit Sri Lanka in 2008, especially in Trincomalee and Amparai areas. In 1990, when the Muslim people were evicted from Jaffna, Mannar and Mulltivu during the civil war, he was there to help them and made them resettled in Puttalam.
Many requests made for a credible investigation by the members of the civil society and the Human rights organizations and Human Rights defenders in Sri Lanka.
Another important matter to be indicated is the CTF has been taken over by the Ministry of Defense of the Central Government, after the abduction and killing of Razeek.
Human Rights Organizations throughout the country along with his family members campaigned to seek justice and to book the perpetrators who is responsible for this heinous abduction and murder.
Even the eight-member commission of inquiry appointed by President Mahinda Rajapakse following the end of the civil war concluded in its report that police had failed in their handling of the case.
“The development we have seen so far in this case is that, both key suspects have been released on bail, family members and lawyer have not been given access to the post-mortem report which must have vital information on the truth behind his murder”, said Seyeed Ahmad, Country Program Manager of Forum-Asia, commenting on the case in 2013.
For many years now the Sri Lanka Government has been urged by UN agencies and International Human Rights Organizations as well as several governments to take effective steps to stop abductions and forced disappearances in the country, however much has to be done by the government in this regard.

Even after 4 years of neglect, this is high time to carry out an impartial investigation and book the perpetrators of this crime as by now Police is having all the scientific and technological evidence such as DNA and details of mobile calls demanding the ransom to release Razeek