‘Patrimony of the Rich’ to the ‘Inheritance of the Poor’: 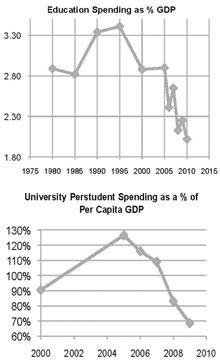 6% of GDP in State Investment for Education 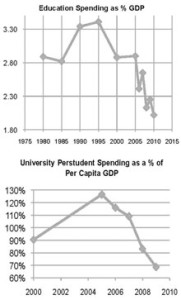 by Ahilan Kadirgamar
In presenting the recommendations of the Special Committee on Education to the State Council in 1944, C.W.W. Kannangara, then the Minister of Education, famously rephrased the quote of a 19th century Scottish jurist and politician: “Sir, it was the boast of the great Augustus that he found Rome of brick and left it of marble. How much nobler will that be for this State Council when we shall be able to say that we found education expensive and left it cheap; that we found it in a sealed book and left it in an open letter; that we found it the patrimony of the rich and left it the inheritance of the poor.”

The reforms that led to decades of free education in this country were drafted by a multi-ethnic Committee of 23 educationists. The Committee existed for three years with sittings in Jaffna, Kandy, Galle, Batticaloa and Colombo. Sessional Paper 24, the Report of the Committee, reflected a wide range of concerns and provided the grounds for a national policy on education. The strength of the Report was its breadth of analysis and its grounding in issues facing education in Ceylon at that time. However, it was able to make a major mark on education in the country by channelling those broader concerns into an unequivocal demand for free education.

Today, almost 70 years later, free education is under attack and on the brink of destruction. Although the Government postponed a secretly drafted and controversial private education bill that met with much protest in January, it has been complicit, together with successive governments, in propelling the slow death of free education. State investment in education is at an all time low of 1.9% of GDP. When educational spending is so low, in fact one of the lowest in the world, private education is supported and promoted by default. It is the wealthier classes that can augment a poorly funded public education system with private services by sending their children to expensive tuition classes, international schools, or additional diploma courses and putting them through private academies or universities abroad. This is where the call for 6% of GDP in state investment for education by the Federation of University Teachers Associations (FUTA) is a demand worthy of support. It deserves admiration in line with the recommendation of Kannangara and his Committee on Education for free education in the 1940s.

While there are many other demands and a whole range of issues that FUTA is engaging with, – including the political appointments of administrators, militarisation of university space, the Z-score fiasco and the shutting down of rural schools – topics on which many academics have prolifically written about in recent weeks, in this article, I wish to specifically address the political economy of the 6% demand. FUTA’s 6% demand, one of the most insightful political demands in our recent history, is being shunned or dismissed by mainstream economists for ideological reasons. Given the complicity of the mainstream economic establishment in the escalation of the global economic crisis, and their current push towards further austerity and cuts to social welfare in the West, the dismissal of neoclassical economists or the positions of neoliberal international agencies such as the World Bank and IMF should not deter us from exploring the 6% demand.

The FUTA call for 6%, initially a demand of 5,000 university teachers, is now burgeoning into one that encompasses the concerns of 230,000 school teachers, over four million students, their families as well as the broader citizenry. The 6% demand is thus becoming a demand of the public and about our society. Will this public demand be able to open our imagination to think in radically different ways about the economy? For example, what percent of our GDP should the government invest in health, the other pillar of our society? How do such demands on the state for social welfare relate to our social expectations of the economy? And what do GDP and economic growth mean beyond being measures of the total goods and services produced in this country? And, more importantly, who benefits from such economic growth?

The Government boasts 8% GDP growth and US$ 2,800 per capita GDP last year. But what do these numbers mean when between 2005 and 2010 education as a percentage of GDP has fallen from 2.9% to 1.9% and expenditure per university student as a ratio of per capita income has fallen from 130% to 70%? The tenure of the Rajapaksa Government has so far been characterised by an attack on education and social welfare more broadly. These changes are neither accidental nor inevitable as some economists and Government propagandists would like to have us believe. Rather, it reflects the priorities of the Government.

The 6% demand also pushes us to think about the meaning of GDP and economic growth, and who it serves. Transforming public education into a booming private business to serve the wealthier classes in this country as well as foreign students who can afford the high fees, would admittedly contribute towards GDP growth. But would it serve broader society? This is where there is a clear and important distinction between state investment in education as a percentage of GDP and private sector share of education as a percentage of GDP. The private education bill and the promotion of private universities will increase private sector share of education as a percentage of GDP as well as contribute towards GDP growth. However, such private universities due to their high costs will only serve the wealthy. Furthermore, the state university system accessible to the broader citizenry will also be undermined as university lecturers are poached by higher paying private universities.

The important question is why these cuts to social welfare are taking place now and where they are coming from. Austerity measures that restrict the Budget and stipulate cuts to education and social welfare are part of a larger neoliberal class project serving the interests of finance capital. The neoliberal policies of privatisation and austerity favour financialisation of the economy in order to reward global finance capital and the local financial elite. These policies facilitate the accumulation of capital with profits accruing to the financial sector from all other sectors of the economy. Such neoliberal accumulation ravages social welfare by transforming public institutions for education and health into profit making enterprises. In other words, what in our recent history was claimed to be peoples entitlements in the form free education, with the onslaught of private education will indebt families as they are forced to take loans and even mortgage and sell their homes to educate their children. Furthermore, our education system was built with decades of collective social efforts and social investment. Now, with the process of privatisation, this educational inheritance of the people will be dispossessed in order for financiers backing educational businesses to make profits.

The neoliberalisation of education, characteristic of the neoliberal process of “accumulation by dispossession”, has become prevalent in many countries around the world, particularly in the West, with cuts to education accelerating in the context of the global economic crisis. With student debt in Western countries mounting, education has become a severe burden on the youth rather than enabling their social and economic future. And, this is where, merely looking for models of education in the West or the functioning of Western universities as the path to revitalise education in Sri Lanka, is bound to be disastrous. Indeed, back in the 1940s, Kannangara and his Committee were cautious in assessing the models in the UK, the US and the West when insisting on free education in Ceylon:

“Few will disagree with the proposition that education in a democratic society should be free at all stages. Talents and ability are not confined to any social class or group and any social system must provide for their emergence by the provision of equal educational opportunities. … It may be asked why these progressive and advanced democracies have not thought of making education completely free, i.e., from kindergarten up to and including the University stage. … But partly influenced by financial considerations very few countries, even of the West, have made secondary education free for all entrants, and Universities which offer free education are exceptional.”

If in the late colonial period, our visionary educationists could think beyond such models, certainly we can also chart a different path from the currently dominant neoliberal policies transforming education. Furthermore, FUTA’s 6% demand is one they also recognize will take time, a demand that for now requires a commitment from the Government towards step by step increases in state investment. As some researchers have written and historical data shows, between 1954 and 1964, Sri Lanka’s investment in education rose from 2.6% to 4.6% of GDP. So, even from our own history, there is a precedent for the viability of the 6% demand, provided there is political will on the part of the Government.

The reality unfortunately is that the Rajapaksa Government is not interested in addressing the crisis in education. Not only has the Government dragged negotiations with FUTA in recent weeks despite the crippling strike, but ironically reflecting the priorities of the Government, the President recently held a meeting with stockbrokers which was followed by the Finance Secretary meeting twice with the financial sector. The Government claims to be seeking their input for the next Budget, but perhaps their interest is in propping up the stock market? The FUTA struggle is then being waged, not only in the context of the crisis in education, but also in the backdrop of the hegemony of finance capital. Therefore, FUTA’s trade union action and particularly its 6% demand, needs public support to transform it into a long term national struggle of the citizenry, a struggle that must recognise education as the “inheritance of the poor” built over decades by previous generations.
IS