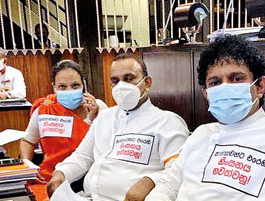 The low depths to which some MPs in the current Parliament have fallen was yet again in evidence this week as a female Opposition MP was subjected to verbal sexual harassment by a male Government MP, who then escaped punishment.
There were several elements to the disgraceful saga surrounding the actions of Badulla District Sri Lanka Podujana Peramuna (SLPP) MP Thissakutti Arachchi. His speech to Parliament on November 20 during the Budget debate was a lengthy tirade against the Opposition. Such speeches are commonplace now among many MPs on both sides, who often resort to shouting and hurling wild allegations instead of presenting rational arguments backed by facts. But the MP from Badulla went further than most, when he made some lewd remarks laced with sexual innuendo directed towards Matale District SJB MP Rohini Kumari Wijerathna. MP Thisakutti Arachchi also made similar disparaging comments regarding the wife of Opposition Leader Sajith Premadasa.

While Mr Thissakutti Arachchi’s comments were disgraceful, Hambantota District SLPP MP Ajith Rajapakse, who was in the Chair at the time, was also culpable in not stepping into censure the MP and strike down the offending comments from the Hansard, as he was empowered to do. When Kurunegala District SJB MP Nalin Bandara raised a Point of Order and asked that the insulting remarks be stricken from the Hansard, Mr Rajapakse claimed he did not hear such comments and added that he would convey the matter to the Speaker to check. The comments by the Badulla MP, however, elicited laughs from fellow backbenchers while some thumped their desks in approval, indicating that not only did some of his fellow MPs get the meaning behind the comments, but they also found them funny and approved of them.

It is also noteworthy that none of the senior male MPs in the Government condemned the comments or even acknowledged they had been made.

On Monday (22), Ms Wijerathna drew the Speaker’s attention to the matter. “I ask you Honourable Speaker whether you approve of these comments. I ask the Leader of the House and Chief Government Whip, who are also senior MPs, whether they approve of the comments. Mr Vasudewa Nanayakkara, who has been in politics for so many years, I ask whether you approve these comments,” she said.

She further questioned Mr Thissakutti Arachchi directly whether he would ask the same questions laced with sexual innuendo from his own mother, wife or other female family members.

Chief Opposition Whip Lakshman Kiriella also took issue with Mr Rajapakse’s conduct from the Chair when the comments were made, noting that he did not move to strike down the comments from the Hansard. He alleged that the MP had showed bias in his conduct.

After studying the matter and meeting with representatives of the Women Parliamentarians’ Caucus, Speaker Mahinda Yapa Abeywardena made a statement on Tuesday expressing regret at what he said was an insulting speech directed towards women that was made in the hallowed chambers of Parliament. He strongly warned Mr Thissakutti Arachchi to refrain from making such vulgar comments in the future. The Speaker asked the Government Chief Whips and the Opposition to take measures to brief their MPs to prevent a recurrence, and warned he would take stern action if such incidents were repeated.

SJB MPs wore orange armbands and wore tags on Thursday in solidarity with the Global Movement of 16 Days of Activism against Gender-based Violence. They also used the occasion to highlight the harassment directed towards Ms Wijerathna.

Despite the condemnation, Mr Thissakutti Arachchi was unrepentant, insisting he never meant to insult anyone with his comments. “I will only apologise if I said a word that was insulting to any woman. I did no such thing,” he claimed. He also repeatedly challenged Opposition MPs to say the words in his speech which were insulting to women. He claimed his words were not vulgar. “It’s not my fault if others have vulgar minds to take it that way.”

Mr Thisakutti Arachchi’s comments, however, even came in for condemnation from his female colleagues in the Government. After the incident, State Minister Dr. Sudarshini Fernandopulle, who chairs the Women Parliamentarians’ Caucus, had written to the Speaker drawing his attention to the issue and urging him to take action to prevent female MPs from being subjected to verbal sexual harassment in Parliament by Government and Opposition MPs. Speaking on Tuesday, Dr Fernandopulle condemned the comments. “There are only 12 female MPs in Parliament. We are doing politics under great difficulty. We condemn such comments even made indirectly targeting female MPs, whether they are in Government or Opposition.”

While thanking the Speaker for condemning the comments, Chief Opposition Whip Lakshman Kiriella expressed disappointment that the SLPP MP escaped punishment. “I have been in this Parliament for 32 years but have never heard such words,” he told the Speaker. Mr Kiriella pointed out that the MP in question had refused to apologise for his actions and as such, insisted that he be punished.

The request did not meet with success, with Speaker Abeywardena saying far worse things had been said in the previous Parliament but no action had been taken. While it is heartening that the comments were condemned, it is unfortunate that an MP who refuses to admit he is at fault and refuses to apologise escapes with what amounts to a little more than a slap on the wrist.