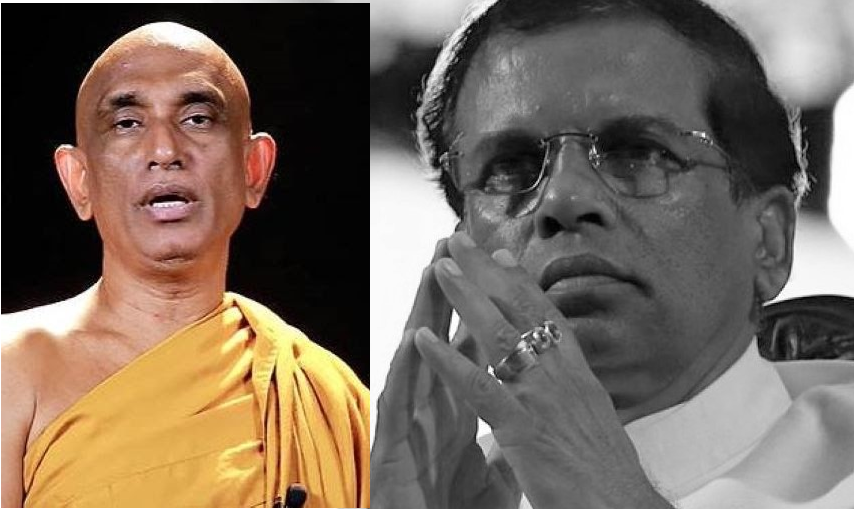 Image: Alleged bribe taker Rathana Thero was a close associate of Sirisena and a presidential adviser.

Son of wealthy businessman in Colombo, Shramantha Jayamaha was sentenced to death for the murder of Yvonne Jonsson at the Royal Park Condominium complex in Rajagiriya in 2005.

In 2006 the High Court ordered a 12-year prison sentence for Jayamaha. In 2012 Jayamaha was given the death sentence by the Court of Appeal following an application by the Attorney General’s department against the earlier verdict.

The sentence was confirmed by the Supreme Court of Sri Lanka.

On November 9, 2019,  Shramantha Jayamaha was granted a presidential pardon by Maithripala Sirisena during his last week in office.

Now in speaking to media Sirisena says that an investigation has revealed that some individual has taken money to ensure that a presidential pardon was granted to Royal Park murder convict Shramantha Jude Jayamaha.

In plane language this is a bribe.

But Sirisena denies taking any part of the said bribe to give a presidential pardon to Shramantha Jayamaha.

Sirisena’s family has acquired bungalows and tourist hotels during his presidency. There has no information in public about how his family earned money to acquire these asserts.

Sirisena says that  MP Athureliya Rathana Thero had visited him along with the parents of convicted Shramantha Jayamaha and had handed over a letter seeking the latter’s release.

Sirisena further says that although he had not paid much attention to the letter, MP Sirisena said that MP Rathana Thero would visit him often with Shramantha’s family members and kept urging him to release him.

Then comes the most interesting statement:

“There were rumours that I had received Rs. 50 million, Rs. 50 billion, and even Rs. 80 billion to release Shramantha. I immediately instructed CID (Crime Investigation Department) officers to investigate the matter. Officers from the CID found that someone has taken payment to ensure Shramantha’s release.”

The money was given by family of Shramantha to undisclosed person.

In the same interview Sirisena hints that the person received the bribe could be MP Athureliya Rathana Thero. When inquired if the people who took the money were the ones who had been keen on the release of Shramantha, the former President said that could be the case.

Rathana Thero has not responded to Sirisena’s accusation yet.

These are vert  important questions that Sirisena must answer in relation to his statement on pardoning a murder and so-called investigation he authorised.

Who are the CID officers handed this investigation?

Did Senior SDIG Ravi Seneviratne or SSP Shani Abeysekera, who were the heads of the CID at the time, knew about this investigation?

To whom the investigation report was submitted?

Did President Sirisena lodge a complaint with the Bribery Commission regarding the bribery taken form ShramanthaJayamaha’s family? If not, why?

How much money was given as a bribe according to the investigation report?

Is there a copy of the investigation report?

CID officers can not report to president directly and any report has to go through the heads of the department. Sirisena didn’t have a private Intelligence Unit.

If a President finds out that a person sentenced to death by the Court of Appeal and the Supreme Court of Sri Lanka was released after accepting a bribe, it is also a crime not to take appropriate legal action.

(With the inputs from several media reports)

‘Our Power of People Party’ (OPPP) National List lawmaker Ven. Rathana said that he hadn’t received a cent from Jude Shramantha’s family or any other benefit.

An irate MP said so when The Island sought his response to ex-President Maithripala Sirisena’s recent declaration that those who had sought his intervention on behalf of Jude Shramantha received a massive amount of money.

Sirisena made the allegation in a live interview after having claimed that Ven. Rathana had relentlessly pursued the matter until Jude Shramantha’s release. 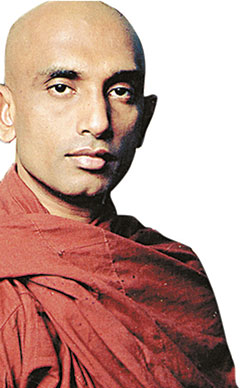 Jude Shramantha was convicted for the murder of19-year-old Swedish teenager Yvonne Jonsson at the Royal Park Condominiums at Rajagiriya in July 2005. He was 19 at the time of the incident. The Court of Appeal in 2012, sentenced the teenager to death after having dismissed a 12-year prison term imposed by the Colombo High Court. Sirisena granted him a presidential pardon a few days before the end of his presidential term in Nov. 2019.

Responding to interviewer Attorney-at-Law Sanka Amarajith on Derana 360 on Monday (20), a flustered MP Sirisena said that he had directed State Intelligence Services to inquire into allegations that Jude Shramantha’s family paid money for his release. Sirisena said that some alleged he had received “koti (crore) 5, koti 800 while some said koti 500″. The intelligence services reported back that money had been paid, MP Sirisena said, adding that as he didn’t receive a cent, somebody else must have benefited. The former President alleged that those who had been involved with the convict’s family must have benefited.

Sirisena said that Ven. Rathana had brought the Jude Shramantha’s family whom the SLFP leader described as Catholics, four or five times, even in the night to his Pajet Road residence. Ven. Rathana told The Island that he had taken them twice, one time before the presidential pardon and another time thereafter.

Ven Rathana alleged the SLFP leader propagated lies. “I’ll be lodging a complaint with the CID in this regard. Law enforcement authorities and the CIABOC can verify the ex-President’s accusations with Jude Shramantha’s family,” Ven. Rathana said on Wednesday (22).

Sweden took up the presidential pardon with the Sri Lanka government at that time as the victim was half Swedish.

Both Sirisena and Ven. Rathana emphasised that proper procedures had been followed as regards Jude Shramantha’s release. After having lodged a complaint with the CID yesterday morning, Ven. Rathana told this newspaper that investigators could ask the then head of State Intelligence Service (SIS) Senior DIG Nilantha Jayawardena whether the President had directed him to investigate the Jude Shramantha affair.

Ven. Rathana said that as he had been engaged in drug rehabilitation work there was an opportunity to work with Jude Shramantha. The former JHU heavyweight and one-time close associate of President Sirisena, Ven. Rathana said that the inference he had received money from the boy’s family was nothing but a figment of the ex-President’s imagination or a deliberate attempt to discredit him.

Sandra Nathaniels yesterday denied ever having paid anyone. Recalling a meeting with the then President at his official residence at Pajet road, she said both Ven. Rathana and the late Ven. Baddegama Samitha Thera had made representations on her son’s behalf. Responding to questions, Nathaniels pointed out that the former President himself had repeatedly said that his consent had been given after proper procedures were followed as regards the request for presidential pardon. Mother of four, Sandra said that Jude Shramantha, now overseas, wouldn’t come back ever again.

Ven. Rathana thera said that relevant authorities should inquire into MP Sirisena’s accusations. The amounts of money alleged to have been paid by the concerned family was so huge by any standards the government couldn’t afford to ignore the need to investigate. The Parliament, too, should be concerned about this matter as the accuser and the accused were both members of the current Parliament, the Ven thera said.