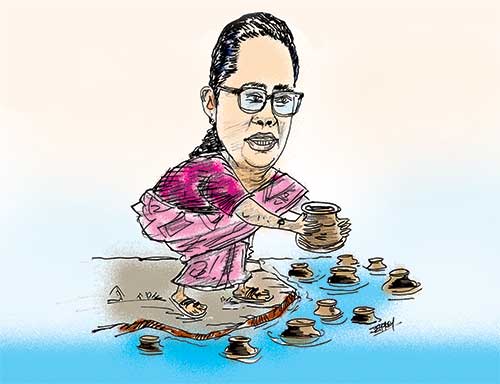 What a great nation we are!

We have a Cabinet Minister – the one in charge of health – offering to sacrifice herself to the sea, to save this country from the Covid pandemic. Shouldn’t we feel safe?

Is she in fact offering to make this self-sacrifice to atone for the overall failure of the government, with the power of 20A too, to control this virus spread? Let’s keep that for its 145 plus members to decide.

Does this Pavithra from Sabaragamuwa, with an Aratchi heritage from the Vanniya, have hopes of being our next Vihara Maha Devi? Does she know that the daughter of  King Kelanitissa, made her sacrifice for her father burning an innocent monk in a cauldron of oil?

Is she ready to tell us what faults, crimes, or sins of her own leader/leaders she is willing to make this sacrifice for, when the sea had not yet flooded the country, as happened when the princess was  ceremonially cast into the sea to save the land?

The near insanity of this politically catchy offer of a sacrifice has already given her the name of Vikara Maha Devi. I think Maha Vikara Devi would be closer to reality.

Is this Maha Vikara Pavithra hoping that  putting her into the sea also will take her to Kirinda at Rohana or Ruhuna, where she will be the wife of a new King Kakavannatissa? Or does she know that this king’s father was Gothabhaya? Is she trying, with this sacrifice, to escape the problems of the current Gotabaya?

Or, is she hopeful that the sea will take her to the Rajavasala, where she may reign over the rising Rajavansaya, made stronger with her known attachments to Raja Mahinda?

This could be a dream of this Pavithra Vikaraya. When her dropping of a ‘manthara’ or charm chanted kala gediya into the Kalu Ganga was mentioned in Parliament, she was quick to respond about her right to observe her religious rites. What religion was she thinking of or talking about? The ‘manthara – gurukam’ that was the stuff of the pot that polluted the river water it was dropped  into, is certainly far away from Buddhism. Is she now in an era of manthara-gurukam belief,  which of course is not surprising, seeing the three other followers of this manthara kalagedi naadagama.

One is known to be a western allopathic doctor, who is the favourite doctor of prime minister Mahinda Rajapaksa, who has recommended him to many, including Indian Cricketers, several of whom he has treated. He was there with the manthara kalagediya, but surprisingly with a Covid mask on his face. Was he not so certain about this kalagedi keliya – that our Minister of Health was guiding the people to?

There was also Minister Gammanpila, a regular spokesman for the government, and one who is awaiting a 20A US dual citizen to our parliament. He was so well white-clad when going through this manthara pollution of the river.  There was also Minister Prasanna Ranatunga, who moved away from white-clad or any other decency in garb but was in a hasty shirt and shorts, to do one more manthara pollution of a river.

Have we moved into the acceptance of Manthara-Gurukam Governance? Is this Maha Vikara Pavithra giving us more than a mere hint that Manthara-Gurukam will be the stuff of the promised constitution?

Do we see a new era that will move away from the Maha Sangha and give a towering place in society and governance to the Manthara Guru Kendraya. Will we have the horoscope to be the guiding light of the people and not the Buddha Dharma? Will every session of parliament be opened with the chanting of a manthara in keeping with the horoscope of the Speaker, who will be known as the GuruNayaka?

Maha Vikara Pavithra , and her minister colleagues have made us think of the emerging realities of governance. Are we to embrace the manthara politics of the Rajavasala, or think in terms of what we can really do to these players for themselves, and not servers for the people?

Whatever the new constitution plans for us, it is good if we take more than a hint from Maha Vikara Pavithra, and think of how we can throw all of these Vikaravansa politicians, 145 plus, including any future dual citizen, into the sea – not polluting our rivers – in the hope that they will not be carried away to pollute any other country, but to an isolated island far, far away; where they can keep the manthara-gurukam system alive with their singing and dancing to the rhyme of the horoscope nakath or apala times.

There was a huge load of political dirt that Maha Vikara Pavithra, her two cabinet minister colleagues and puzzling doctor threw into the rivers. There will be much more of such grime and muck in politics and governance that our people will have to face and suffer in the coming months and years.

Until we can move our thinking to fight against  Maha Manthara Governance, shall we join the vikara fight against covid, by carrying our own clay pots filled with water, to which we have chanted anti-corruption chants, and drop them in every river, canal, and even tank or wewa? It will certainly give a boost to the clay pot industry, that must be having its own minister today.

We are in the midst of a new Magic Pot Culture – that is the stuff of Lotus Bud governance. It is the shining fabric of the Rajavasala Regime!