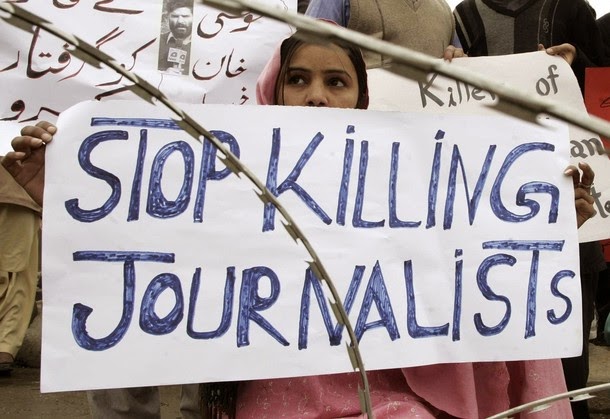 The United States, the United Kingdom and a delegation of the European Union on Friday called upon the Government of Pakistan to resolutely defend media freedom in the country, adding that gags on the media and attacks on journalists were not acceptable.
While marking the World Press Freedom Day today, May 3, the European Union Delegation, in agreement with the EU Heads of Mission in Pakistan, expressed in a statement its deep concern over the steadily deteriorating environment for media freedom in Pakistan. The EU delegation said that Pakistan is one of the most dangerous countries in the world for journalists.
May 3, was proclaimed World Press Freedom Day by the UN General Assembly in 1993. This year’s theme for this day, as declared by the UN, is “Media Freedom for a Better Future: Shaping the post-2015 Development Agenda”.
Amnesty International in its statement of April 30 said that journalists in Pakistan live under the constant threat of death, harassment and other violence from all sides, including the intelligence services, political parties and armed groups like the Taliban. Pakistan’s media community is effectively under siege. Journalists, in particular those covering national security issues or human rights, are targeted from all sides in a disturbing pattern of abuses carried out to silence their reporting. The spy agency has been implicated in numerous abductions, torture and killings of journalists, but no serving ISI officials has ever been held to account which effectively allows it to continue to operate beyond the reach of the law. Human rights violations against journalists by the ISI often follow a familiar pattern that starts with threatening phone calls and escalates into abductions, torture and other ill-treatment, and in some cases extrajudicial killings.

The World Press Freedom Index 2014, issued by the international non-governmental organisation “Reporters without Borders” earlier this year, termed Pakistan “….. the world’s deadliest country for media personnel”, adding that for the second year running, the Indian sub-continent is the Asian region with the biggest rise in violence for journalists. The index calls the targeted nature of the violence “the most disturbing development”. The report ranked Pakistan at the 158th position out of 180 countries.

It is evidently true, as far as the government is concerned that Pakistan is not the deadliest country in the world for journalists. They claim that dozens of media houses are operating freely and that the media has never enjoyed such freedom in its history. However, every year on average a dozen journalists are killed and many are injured by the attacks from Muslim banned organisations, extremists and secret spy agencies run by the military establishment. Many journalists have told various quarters that they would be attacked or killed by state intelligence agencies particularly by the notorious ISI. The Taliban and other Muslim fundamentalist’s organisations are operating freely and they monitor the broadcasting of every television channel and try to dictate their policies. In most cases the owners of the media houses follow their instructions. But the lives of individual journalist remain at the mercy of the militant organisations without protection even from their employers. The governments always want to remain as silent spectators as if the protection of journalists or media houses is not their responsibility.
The year 2014 started with the killing and attack on journalists. On January 1, Mr. Shan Dahar, the reporter of Abb Takk television was shot dead while filming near a pharmacy in Larkana. He had already produced one story on prescription drugs being illegally resold in the town, and was taking video of a package bearing a “not for resale” label on it shortly before he was shot dead.
On January 17, Gunmen riding on motorcycles shot dead three Express News workers on Friay after ambushing a stationary DSNG van in a busy neighbourhood of Karachi. This was the third and most lethal strike on Express Media Group and its staff in the space of five months. In two previous attacks, the main offices of Express Media Group, were targeted. The January 17’s ambush took the lives of a technician, security guard and a driver, all of whom were seated in the front of the van. The Tehreek-e-Taliban Pakistan (TTP) claimed responsibility for the latest attack in a live telephone call from Afghanistan to Express News.
From January 2013 to date, 17 journalists were attacked and injured either by the intelligence agencies, beaten and tortured by police or by injured by violent people while covering processions and rallies. Other journalists mentioned in the report are living under the dangling swords of life threats. The authorities were least bothered about conducting investigation in the matter except in the case of Hamid Mir, who was attacked by unknown persons while he was coming from Karachi airport during the tight security arrangements for former military ruler General Pervez Musharraf.
On March 28, Raza Rumi, a prominent journalist and anchorperson from Express News channel has survived an assassination attempt but his driver was killed. He left the country as he found no security or protection from the government. The Taliban has accepted the responsibility for the attack which has given a good excuse to the government that they can not provide protection as the Taliban is beyond the reach of the law enforcement agencies including the military intelligence agencies.
On April 6, Jamshed Baghwan, Peshawar bureau chief of Express News was been targeted for the second time this year. A bag with 2.5kg of explosives was found outside his house, and on April 6, grenades were thrown at his residence. Baghwan says every day his mother and colleagues tell him to leave the country as they do not find any protection from the law enforcement agencies.
On April 19, a prominent journalist and anchorperson of Geo TV was attacked by unknown persons and he was critically injured by six bullets. He and his family members accused the ISI and its chief general Zaheerul Islam for the attempt to kill him. The military establishment, instead of, conducting inquiries against the allegations rather file a petition before the Pakistan Electronic Media Regulatory Authority (PEMRA) to cancel the license of Geo TV for hurling the blame on ISI. The ISI and military establishment are using banned Muslim terrorists organisations and its paid politicians to agitate on the streets in favour of military and the ISI.
On May 2, a Geo TV News cameraman was subjected to thrashing and a bid was made to snatch his camera. Geo News cameraman Asif Kabir was going to the channel’s office located in Model Town A, Bahawalpur, Punjab, when three bike riders wearing helmets intercepted him. The three men called him a traitor and an Indian agent and assaulted him. They injured badly but no case has been filed by the local police.

During the year 2013, the Asian Human Rights Commission (AHRC) documented that 13 journalists were killed while performing their duties. 55 journalists have been killed in the line of duty in Pakistan in the last ten years, and 36 of them were deliberately targeted and murdered because of their work, says the Pakistan Press Foundation (PPF) in its latest report. The PPF say, for every journalist who has been deliberately targeted and murdered, there are many others who have been injured, threatened and coerced into silence. Sadly, the perpetrators of violence against journalists and media workers enjoy almost absolute impunity in Pakistan. This is seriously hampering press freedom in the country.

In the country the media freedom is fragile. Journalists are being harassed or killed for doing their work, publications are being censored or shut down, and laws are being passed which criminalise free speech. This reality does not change on the Internet. Along with the jobs offered by the network, new obstacles emerge: content filtering, monitoring and suspension of Internet access, often without due regard to individuals’ fundamental rights.
The judiciary, which is always looking for the political cases to shut up the democratically elected governments by using Suou Moto actions while the government fail to control the spy agencies and its cronies for the attacks on journalists and escape from their responsibilities for the protection and suitability of the freedom of expression which is the basis of a democratic society.
The AHRC calls upon the military establishment to halt the use of coercive actions on the freedom of expression and press as if it is continued it would lead to the defeat of the military in the hands of unarmed media persons. The Government of Pakistan must ensure that all abuses committed against journalists are duly investigated and that appropriate action is taken against perpetrators while the public is provided with information on the outcome of enquiries.
The government must defend media freedom, this being an important component of the freedom of expression as defined in Article 19 of the International Covenant on Civil and Political Rights (ICCPR) and in the Article 19 of the Constitution of Pakistan.
# # #
About AHRC: The Asian Human Rights Commission is a regional non-governmental organisation that monitors human rights in Asia, documents violations and advocates for justice and institutional reform to ensure the protection and promotion of these rights. The Hong Kong-based group was founded in 1984
Share
Facebook
Twitter
WhatsApp
Pinterest
Email