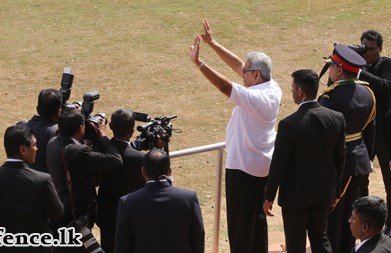 The Task Force has been named as the “Presidential Task Force on Creating a Green Sri Lanka with Sustainable Solutions to Climate Change”.

This is a continuation of Gotabaya Rajapaksa’s presidential rule overriding the parliament in Sri Lanka.

The Task Force, chaired by Basil Rajapaksa, the Special Representative of the President, consists of 46 members including five Cabinet Ministers, a Governor, 14 State Ministers and a female Member of Parliament. But t comes under the president not the parliament.

The other members of the Task Force are;

The Cabinet approved the overall policy framework and proposals contained in the Cabinet Memorandum submitted by President Gotabaya Rajapaksa on April 27 to transform Sri Lanka towards a green socio-economic model with sustainable solutions to climate change, says a media release by Presidential Media Unit.

The release further says that:

“The Presidential Task Force has been appointed with the objective of achieving a number of eco-friendly objectives including saving foreign exchange outflows within the country, enabling the country to achieve a high advantage in the emerging global economic pattern and preparing the people for an eco-friendly socio-economic model.

The Task Force has a responsibility to pay special attention to 24 other issues in relation to environmental protection.

Another main responsibility of the Task Force is to prepare a roadmap for the complete transition from chemical farming to organic farming using organic fertilizer products instead of chemical fertilizers, pesticides and herbicides.