Over 90% of districts are estimated to have more than a 60% health risk in election campaigning, says CMEV 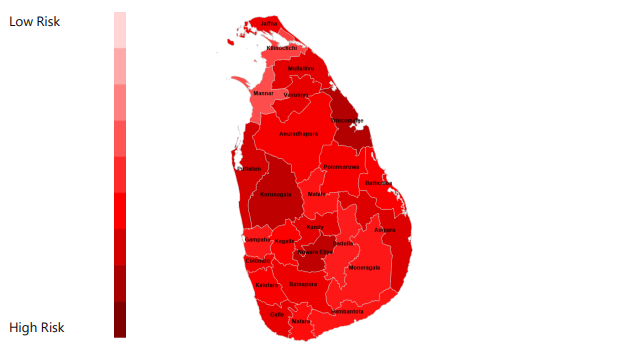 Image: Using the indicator explained in the report, the above COVID-19 Risk Map in election campaigns has been developed.

Based on the information received by CMEV from field observers as of July 16, 2020, a number of indicators were used to measure party and candidate compliance with the COVID-19 election guidelines. According to these observations, CMVE says that  “over 90% of districts are estimated to have more than a 60% health risk in election campaigning due to the non-compliance of COVID-19 health guidelines by parties and candidates.”

The relevant section of a CMEC report:

CMEV conducted its first evaluation of the ground situation during the election campaign for the Parliamentary General Election 2020. This observation mission was conducted two weeks since the official campaigns of the major political parties and candidates were launched. Four field teams together with field observers conducted these field evaluations in the Anuradhapura, Polonnaruwa, Batticaloa, Digamadulla, Nuwara-Eliya and Monaragala electoral districts with the primary objectives of observing the commitment
of political parties and candidates in following the health guidelines for conducting election campaigning amidst the COVID-19 outbreak; gauging public interest in participating in the elections; and developments in the ground campaigns.

The Ministry of Health in consultation with the Election Commission issued a comprehensive set of guidelines to be followed during elections on June 9, 2020. These guidelines needed to be gazetted before they could be enforced by election officials, however, there was a long delay in doing so. It was only after significant pressure mounted by the Election Commission, election observation organisations including CMEV, the media and the public that a version of the guidelines was gazetted on July 17, 2020 by the
Ministry of Health, as the Corona Virus Disease 2019 (COVID-19) (Elections) Regulations, No. 1 of 2020. These regulations relaxed a number of restrictions on physical campaigning (including meeting and canvassing participant limits) and omits a significant number of provisions in the original guidelines. It should be noted the field evaluations covered in this report were conducted before the Regulations were gazetted.

In every electoral district CMEV visited, the commitment of candidates and organisers of most political parties to comply with the health guidelines was negligible. The establishment and daily functions of the campaign offices, meetings and door-to-door campaigns were all observed as operating with minimal precautions to prevent the spread of COVID 19 virus. CMEV field teams reported that most of the party supporters who work at campaign offices were seen not even wearing face masks.

However, when CMEV raised the issue with candidates and their main organisers, they responded that their meetings and canvassing would follow the necessary guidelines, while some mentioned that the guidelines had not even been communicated to them. All candidates said that while they would attempt to follow the guidelines for meetings and canvassing, it was unlikely they could be completely followed while on the campaign trail.

Mr. D.M.S.B. Dalpatiya, a Public Health Inspector (PHI) in Nuwara-Eliya informed CMEV that he has given health instructions to be followed at public meetings to all candidates and none of them were seen following those instructions. Mr. Nilanka Jayawickrama, Additional Health Officer in Monaragala also confirmed to CMEV that the majority of candidates are not complying with the health guidelines in their campaigns. He further added that candidates and their organisers do not inform PHIs about their campaign meetings. PHIs also have not received enough information and materials about the health guidelines from the Ministry of Health or elsewhere to keep party offices informed about those.

Anuradapura PHIs Mr. Nuwan Kulathunga, and Mr. Ajith Kumara revealed that they have not received any facility to visit campaign offices and meeting locations. They will only visit informed locations of campaign offices. According to them, only the NPP had submitted their campaign office list. The field team observing the Nuwara-Eliya and Monaragala electoral districts reported that most PHIs have neither visited campaign offices nor provided the required instructions to officers/caretakers in party offices. Assistant Election Commissioner for Nuwara-Eliya stated that even though candidates were conducting election campaigns not in compliance with health guidelines, election officers were not able to take legal action since the guidelines were not gazetted by that time.

Mr. Asanka Rantnayaka, a Divisional Secretary of Anuradapura, however, expressed to the CMEV team that they have deployed five teams to identify party offices operating in violation of health guidelines and election laws. He further revealed that only the supporters of the main candidates attended an awareness program organised for candidates with the participation of Divisional Director of Health, Mr. Thejana. Mr. Ruwan Jayasekara, Municipal Commissioner of Anuradhapura Municipal Council also confirmed that
candidates are not following health guidelines in their campaign activities. He added further that according to unconfirmed information, one main party candidate has had close contact with a COVID-19 positive patient in the Rajangana area.

Ms. Piyumi Artigala, Assistant Election Commissioner for Polonnaruwa also stated that she has received information about the door-to-door campaigns taking place with large groups violating the health guidelines. According to her, she had taken steps to inform all candidates about the applicable laws and guidelines. A PHI who did not reveal his name as he was attending to postal vote duties said that as they do not have legal provisions to take actions against violators of health guidelines for election campaigns,
they had stopped issuing permits for campaign offices and meetings temporarily.

Based on the information received by CMEV from field observers as of July 16, 2020, a number of indicators were used to measure party and candidate compliance with the COVID-19 election guidelines. Using these indicators, the following COVID-19 Risk Map in election campaigns was developed.

Over 90% of districts are estimated to have more than a 60% health risk in election campaigning due to the non-compliance of COVID-19 health guidelines by parties and candidates.

For the full report go here.