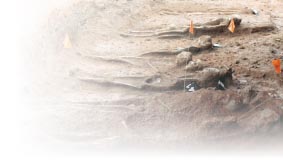 Niranjala Ariyawansha
The number of skeletons unearthed from a location at the Matale Hospital, during excavations done to construct a Bio-gas Unit, has risen to 58, and Matale residents allege the investigations into the skeletons have been abandoned midway.

However, according to Dr. Arjuna Thilakaratne, Medical Superintendent of the Matale Hospital, the investigations have been temporarily halted due to incessant rains that have hampered the probe since Monday.
Elaborating on the probe, he said he was only a facilitator in the investigation process.

“The rains have flooded the location, but the investigations will continue. We hope that the actual facts could be ascertained soon. If any attempt is made to make any sort of statements on the issue, it would not only be unfair, but also could be a hindrance to the investigations that are ongoing,” Dr. Thilakaratne said.

C. I. Ekanayake, IP of the Matale Police is also of the same view stating that investigations had to be halted due to heavy rains. Judicial Medical Officer Dr. Ajith Jayasena, too expressed the view that rains had hampered investigations.

“We plan to restart the probe from December 29. We have requested for a few tents from the Disaster Management Centre. What is important now is to keep the skeletons in a safe place. A few skeletons have been brought to the hospital. We plan to keep the rest where they are now and to keep them in safety to conduct further investigations,” said Dr. Jayasena, who added that he is getting a lot of assistance from the Matale Police for the investigation.

However, the residents of Matale are of the view that despite the discovery of such a large number of skeletons, they fail to comprehend the lukewarm interest the government is expressing on the whole issue.

The residents strongly suspect that the mass graves are of Janatha Vimukthi Peramuna (JVP) youth from the period 1988-1989. The JVP too added to these sentiments by making a statement to the effect that the authorities should reveal those who were responsible for those murders. The residents allege that the government, instead of expediting the process on the mass graves that have already been found, is attempting to dig up imaginary graves all over the country.

Matale residents, while reiterating that the graves belong to JVP youth murdered during the 1988 period, also point to the fact that there had been a number of military camps in the area. They allege that temporary military camps had been set up not only in the Matale Hospital premises, but also in locations such as Vijaya Vidyalaya; Temple premises at Koombiyangoda; Matale Rest House, amongst others.

“I totally reject this allegation made against the Army, without a proper investigation. I cannot offer a direct answer to the question whether there was an Army came in this location or not. I cannot imagine that there could be an Army camp for a lengthy period at a place like this hospital. My view is that we should first let police investigations take place,” the Army Spokesperson said.

When the first few skeletons were being discovered, the media reports indicated that they were about 40-years-old, and the police were of the view that they could be of those who perished during the 1971 JVP insurgency. However, as the number of skeletons began to increase, numerous views were being propagated.

When those involved with the 1971 insurrection totally rejected that theory, the next view was that the skeletons were of Tamils who had died during the July 1983 communal clashes. But the residents of Matale insist that although there were Sinhala racists in Matale who caused immense damage and destruction to properties and business ventures of Tamils, no mass killings had taken place.

Thereafter, the mass graves were associated with a period as far back as 1947 where it was alleged that the skeletons were of those who had died in the smallpox epidemic at that time.

Meanwhile, the Criminal Investigations Department has connected these deaths to the Matale Rebellion in 1848. An officer of the Department, who declined to be identified, said that the graves were of those who died in the Matale Rebellion in 1848. However, Dr. Jayasena, conducting the investigations totally rejects all such views, theories and conclusions.

“We have still not concluded the investigations and as such, as professionals, we cannot comment on a probe that has not been concluded. We take decisions, even on a button found in this place, in the presence of a Magistrate. I state with responsibility that we strive to function as professionals on these matters. I don’t think that we should confuse the public on these issues, but our concerns and views should be expressed in our final report. As professionals, especially, we should be responsible for our acts and statements,” Dr. Jayasena said.

Professor Raj Somadeva, an archaeologist involved in the Matale excavations, totally rejects the theory put forward by the official of the Criminal Investigations Department.

“I cannot understand why attempts are being made to connect these skeletons with the 1848 rebellion. It’s no easy task to come to conclusions on issues like this. For that we have to consider not only archaeological, but historical evidence as well. In addition, we might have to check the birth and marriage certificates and also land registry documents. We still have not done any of those. The CID is investigating as police officers. We do it as professionals. However, there’s a long way to go before we come to a conclusion,” Professor Raj Somadeva said, adding that he and his team are making a great effort to conduct the investigation from a scientific basis.

“Even 3,000 years ago, all over the globe, the traditional way of burials took place with the body facing west. We are trying to ascertain how these bodies had been buried. However, the position could change due to earth tremors and the like. What we are trying to ascertain is whether these bodies had been hastily buried or done in a traditional manner.

Meanwhile, according to Dr. Jayasena, the Vice Chancellor of the Rajarata University and Geologist Professor Nandasena, had been invited to assist in the investigations scheduled to begin on the 29 along with several Judicial Medical Officers. Professor Somadeva too would be there at the location on that day.

It is interesting to note that in November 2011, an LTTE detainee in Boosa revealed that 26 soldiers, who had been chained and held in an LTTE prison in Kilinochchi, had been burnt to death and their ashes had been buried dumped in Mullaitivu. The Legal Draftsman lost no time in taking over that investigation and not only appointed the Magistrate of Valachchenai, but also Chethiya Gunasekera, a high official of the Legal Draftman’s Department for investigations.

Many wonder as to why such interest and keenness is not evident with regard to the Matale skeletons. It is observed that adequate attention of State entities and authorities has not been given to the Matale graves. The question Matale residents pose is why the interest shown by the government to dig up graves in the North is not evident with regard to the unidentified skeletons unearthed from the South.

“The government loses no time in digging up graves from the LTTE era. That urgency is not there where the Matale graves are concerned. It’s not a question of whether they are Sinhala or Tamil. Skeletons of about 60 persons have been found. We as citizens have a right to find out who they were and under what circumstances their deaths took place. The government is bound to reveal the actual facts to the country,” said a Matale resident who declined to be identified.

Professor Somadeva is of the view that samples of the skeletons should be sent to a laboratory in the United States to ascertain the time period. A Court order is necessary for the process and the final decision maker should be the government.

The people of Matale are of the view that the government should proceed with the laboratory test in the US. They claim that it is inevitable that the blame for the Matale skeletons would fall on the government if attempts are made to wash away the saga of the Matale skeletons in the prevailing floods, especially when the same authorities are struggling round the clock to make the impeachment bid against the Chief Justice a success.
SL