Over 100 yr. old statue of Jaffna’s last King to be eliminated 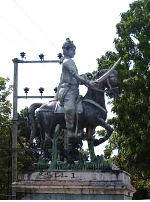 Major General Mahinda Haturusinghe the commanding chief of the north has given orders to the Jaffna Municipal Council Mayor Yogeshwary Pathgunam to remove the statue of the last King Sankili of Jaffna which has stood at the Muththirai junction for over hundred years. The Mayor in accordance with this order has taken measures to clear this statue from its place, and since yesterday this statue is covered by a cloth.

The Jaffna Municipal council Commissioner Saravanabavan stated that Major Gen. Haturusinghe had explained , since the Ministers , MP’s and the general public who come from the South are getting alarmed at the sight of the statue of Sankili King with a drawn sword , this decision to eliminate this statue was taken. (see picture)

Haturusinghe had also told Saravanapavan that in place of this statue of historic value with the drawn sword , another statue without a drawn sword made by sculptors of India is to be substituted.

Kingdom of the Arya Chakrawarthy reigned uninterrupted in Jaffna from 1215to 1619 after Christ. Following the conquest by the Portuguese, the Sankili King of 1617 lost to the former in the battle with the Portuguese in 1619 , and he was taken captive. This last King Sankili was taken to Goa by the Portuguese and killed by hanging. 196 years after this , similarly the last King of the Kandyan Kingdom Sri Wickrema Rajasinghe was captured by the British and taken to Malabar, India where he died while he was a prisoner.

But what is most interesting to note more than the history of these Kings ,is the latest fad in Sri Lanka where there is a proliferation of relatives at every nook and cranny who are claiming blood relationship and of lineage to these two Kings , Rajasinghe of the Hill capital and Jaffna King Chakrawarthy .

The present Prime Minister has linked himself this way ancestrally to the ancient Kandyan Kingdom ruler based on the claim that his place of birth is the Kandyan Kingdom.

Recently, it was announced that President Rajapakse is a blood relative of Sudhodhana ,ancient King of India ,the father of Lord Buddha.

It is hoped that the ancestors to whom links are so established will not turn cartwheel inside their hallowed graves hearing of these announcements.

At this crucial juncture when the Govt. is loudly professing that it is committed to creating and promoting peace and harmony among the ethnic communities , and the opposition leader also stating that he is ready sans ulterior motives and conditions to contribute to achieve that goal of the Govt., the elimination of the statue of King Sankili is something most strikingly significant.