Outrage in Sri Lanka over cremation of Muslim COVID victims 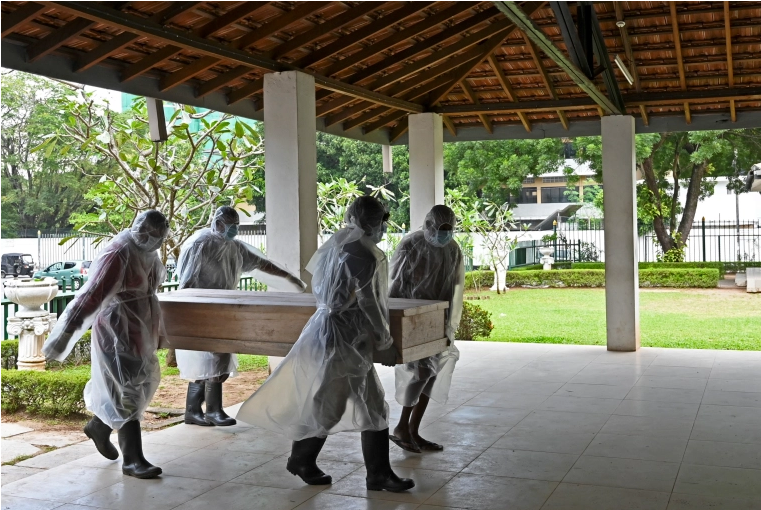 By Munza Mushtaq and Shereena Qazi

Colombo, Sri Lanka – Muslims in Sri Lanka are outraged over the forced cremation of a 20-day-old COVID-19 victim last week against the family’s wishes, the latest in more than a dozen such cremations in the Buddhist-majority country since the pandemic erupted.

Ignoring the World Health Organization’s (WHO) guidelines which permit both burials and cremations, Sri Lanka in March made cremation mandatory for people who die or are suspected to have died from the coronavirus infection.

On December 9, baby Shaykh was forcibly cremated in a cemetery in Borella, the largest suburb of Sri Lanka’s capital, Colombo – the youngest among 15 Muslims to be cremated, thereby denying them Islamic funeral rites.

Shaykh’s father MFM Fahim told Al Jazeera he could not gather the courage to witness the burning of his infant son’s body.

“I told them that I cannot go into a place where they are burning my baby. My friends and family asked the authorities how they can go ahead with the cremation when neither of the parents had signed any document giving consent,” Fahim told Al Jazeera.

“They said because the baby is a COVID-19 positive patient, they can cremate. It is as if they rushed to cremate our baby,” he said. ‘When we asked questions, they didn’t have any proper answer.”

“We would have had some comfort if they had allowed us to bury him instead of cremating him by force. That is what is unbearable,” Fahim told Al Jazeera.

Muslims and Christians bury the dead. But Sri Lanka’s mandatory cremation policy for those infected with COVID-19 has left minority communities feeling helpless and angry.“It is a communal decision they took. The government wants to hurt the feelings of the minorities. They are violating WHO guidelines and basic human rights,” Azath Salley, leader of the National Unity Alliance (NUA) and former governor of the Western Province, told Al Jazeera.

“They did not even spare a child who was only 20 days old. To add to the family’s sorrow, they were even asked by the government to pay [approximately $300] to cover the costs of cremation,” he said.

Salley urged the international community to put pressure on the Sri Lankan government to “respect the beliefs of the minorities and to allow them to bury their dead”.

The Sri Lankan health authorities say the bodies of COVID-19 victims will contaminate the groundwater if they are buried.

On November 4, the government appointed an expert committee to reassess the mandatory cremation policy. In its report submitted on November 22, the committee reaffirmed the policy without citing any reasons.

When the Muslim and Christian groups petitioned the country’s Supreme Court, citing the right to bury according to rituals as a fundamental right, the court on December 1 dismissed their concerns.

Muslims, who make up nearly 10 percent of Sri Lanka’s 21 million people, have faced increased attacks from majority Sinhala Buddhist hardliners following the end of a civil war between Tamil separatists and government forces in 2009.

Meanwhile, anguished Muslim families are refusing to pay the fee demanded by the state to cover the costs of cremations in protest against the policy.

Last week, among the bodies of Muslim coronavirus victims at a Colombo morgue was the body of Mohammad Jeffrey, 76, who died on November 26.

His nephew Mohammed Farook Mohammed Ashraff still does not know if his uncle was eventually cremated. “We didn’t go after that to the morgue, so we don’t know what happened,” he told Al Jazeera.

“As per our religion, Islam, cremating bodies is prohibited. Therefore we can’t accept what they are doing. So we did not give our consent,” Ashraff said. “I told them to keep the body and do whatever they want.”

Several protests were reported across northeastern Sri Lanka this month against the forced cremations, with many tying white ribbons to the gates of the crematorium as a sign of their anger. 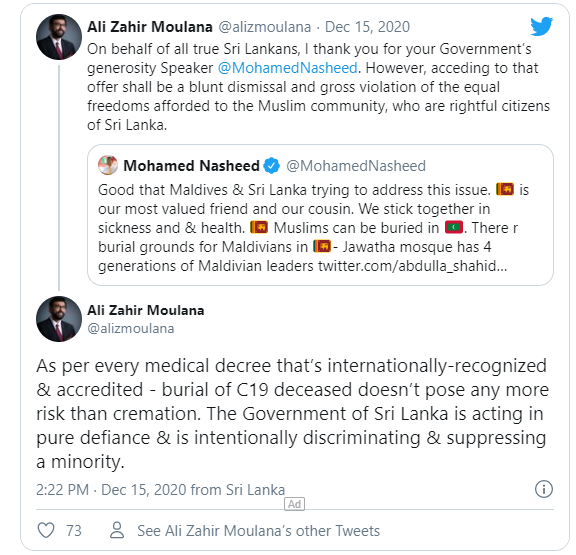 “COVID-19 does not discriminate on grounds of ethnic, political or religious differences, and nor should the Government of Sri Lanka,” it said.

Responding to the protests, government spokesman Keheliya Rambukwella said the cremation policy is for the expert committee to review “from time to time”.

“The government has nothing to do with reviewing the decision to permit burials,” he said, adding that the government stands by the committee’s decision.

“Also, when we highlight the concerns of Muslims, then there are concerns expressed by the Buddhist community who say even some of their final rites have been deprived and then there is the Catholic community’s sermon, so this is a little complex situation.”

When asked why Sri Lanka was insisting on cremation when the WHO guidelines do not say so, he said that was “a very strong argument but it has to be put forward to the expert committee”.

Sri Lankan Muslims are also angry over the neighbouring Maldives saying it is considering a request from Sri Lanka to allow the burials of Muslims who die of COVID-19.

Maldives officials earlier this week said President Ibrahim Mohamed Solih received a request from Sri Lanka to look into the possibility of allowing such burials.

But Sri Lanka’s Muslims are concerned over the government’s plans to bury their loved ones in the Maldives.

“As far as we are concerned, we don’t want the bodies to be exported to Maldives. We want to be buried on our own soil, ” Ali Zahir Moulana, a former parliamentarian who has been vocal against the forceful cremations, told Al Jazeera.

“Of course, it is nice of the Maldivian government to accept it but it’s a slap on our people. We were all born here, we have been living here and we want to die here.”