Our report is used as an endorsement of the minister’s alleged actions – Citizens’ Commission on the Expulsion of Muslims from the Northern Province. 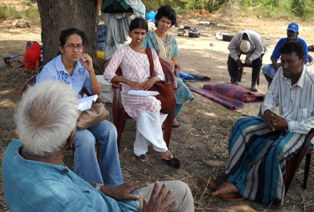 Statement from the Citizens’ Commission on the Expulsion of Muslims from the Northern Province.
The Report of the Citizens Commission on its Mission to Mannar on the 8th and 9th of August has received an inordinate amount of press lately – and while the Commission feels that the coverage provides space for issues raised in the report, it is concerned that the report is being represented in a way that is contrary to the Commission’s intentions and the findings of the report.

Therefore we wish to clarify the following issues:

1.     The Commission on the Expulsion of Muslims was formulated in 2009 to look into the history of the Expulsion, Conditions of Displacement, and Experience and Expectations of Return of the Northern Muslims.  The
Commission   released   its   findings   in   the   volume,   The   Quest   for Redemption: the Story of the Northern Muslims in November 2011. The Quest for Redemption is available at all major bookshops and sections of
it can be accessed on -line at www.citzens-commission.org.

2.     The Commission was formulated because the expulsion of Muslims was inadequately integrated into the historical narrative of the conflict in Sri Lanka. Close to 70,000 people were driven out of the Northern Province by the LTTE within a two-week period without prior notice, with no opportunity to transfer assets.  Some lost their lives on the journey and many lost their futures. This experience is not sufficiently acknowledged in the discussions of the history of the conflict and it is left to those working on Muslim issues to raise it. This lack of acknowledgement has repercussions for the appreciation of the entire gamut of the northern Muslims’ experience, including that of return.

3.     The Commission felt that discussion in the public domain on the Mannar issue  was  not  adequately  sensitive  to  the  concrete  problems  that returning Muslims and the Tamil communities affected by their return were facing in Mannar today.  The entire discussion was limited to the alleged act of the cabinet minister vis a vis the Mannar Magistrate and the damage caused by the protesting crowd. The Commission’s visit was in order to understand and highlight the issue as experienced by the two communities involved—the Uppukulam Community and the Joseph Vaas Nagar community (formerly from Vidathalthivu).

4.     The commission in its report released last year pointed out the fact that Muslims  feel  that  they  are  making  very  little  progress  in terms  of resettlement and that they are facing many difficulties from government officials. These sentiments have to be taken account of. While there were some stories of officials consistently working towards facilitating Muslim return, the experience of the majority of returning Muslims was of officials not being very helpful. This remains true today as well as evident in the recent conflict involving the fishing communities.

5.     The people involved are worse off today than they were when they were attempting to resolve their dispute over the “Paadu” amicably. There is a lack of due process in the arrests and detention of the demonstrators. The Uppukulam community today – women and children mostly—feel extremely insecure with the absence of the men and the increased Police presence in their area. The manner in which the issue is being looked at by larger civil society as mainly a rule of law issue without examining the underlying inter-community and resource conflict is blinding concerned actors to the plight of these people.

6.     Unfortunately the Commission report seems to be read by many as an endorsement of the minister’s alleged actions. We want to state quite categorically that the minister’s actions- if proven–cannot be justified through recourse to statements about the difficulties of return.  The Commission categorically endorses the independence of the judiciary and respect for the rule of law. We also feel that while peaceful protests are a valid  way  of  expressing  dissatisfaction  with  authority,  resorting  to violence is dangerous, inappropriate and unhelpful.

7.     We  also  want  to  state  quite  categorically  that  the  Commission  is committed to the peaceful coexistence of the many communities in Mannar.  Although there are many difficulties that are being faced by the returning Muslims we  are also quite  aware  that these  are perhaps inevitable after twenty years. Both communities have been affected, and Muslim right to return should not be seen as being in opposition to Tamil right to resettlement and relocation after many years of debilitating conflict. If this were to happen it would be a travesty of justice for both communities.

a.  The right of the Uppukulam Muslims to Kondapitty Padu is not   disputed.
b.  The Joseph Vaas Nagar Tamils (Vidathalthivu Tamils) need to be  found an acceptable site to establish their own Paadu within a     specified time limit with the help of GA Mannar.  This too is not     disputed. The GA Mannar needs to take the initiative to resolve     this speedily.
c.   Those who insulted the magistrate and the GA need to apologize. The innocent need to have charges against them dropped and those who are guilty need to be freed after token punishments or warnings. These should be worked out under the authority of the magistrate.
d.  There is a need to restore the earlier harmonious Tamil Muslim     relations  as  well  as  the  confidence  of  the  Muslims  in  the     authorities. Civil society has a lead role in this.

9. The solutions to problems faced by the people in Mannar—both Muslim and Tamil—with regards to resettlement need to be attended to by giving due importance to the difficulties of both communities.  The Muslims’ right to return should not be reduced to a critique of the political  machinations  of  one  representative  or  to  a  question  of competition over resources for resettlement.  There has to be sufficient thought, attention and resources devoted to finding solutions that reflect a minimum standard of acceptance by all affected communities.
10.  It  is  possible  that  vested  interests  may  subvert  the  amicable resolution of the fisher communities’ problems for their benefit. In the past  we  have  seen  that  resource-distribution  conflicts  have  been exacerbated into inter ethnic conflicts, we urge that the leadership of both communities learn from past experiences, and approach this with a deeper understanding and sensitivity towards the peaceful co-existence of Tamil and Muslim communities.