Opposition to the UN Panel report: Any method to this madness? SL Army in disguise 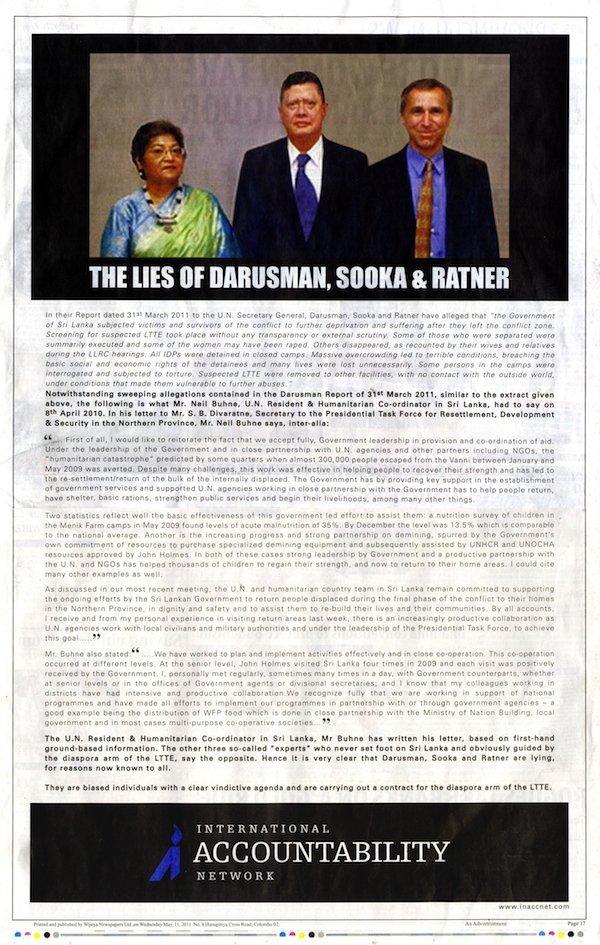 The Daily Mirror today runs a full page add attributed to the ‘International Accountability Network’. Thiran De Silva, Head Of IT, Sri Lanka Army along with the fact that this individual is currently a Web Consultant/Trainer to Sri Lanka Army. The ’International Accountability Network’ website is, politely put, a dysfunctional mess with content largely automatically generated from various web (RSS) feeds.

There is obviously much confusion in official circles on what to do with the report of the panel appointed by the UN Secretary General to look into issues of accountability in Sri Lanka, which has flagged credible evidence of war crimes and crimes against humanity. As we flagged on our Twitter feed, the country’s foreign minister is himself confused over an appropriate response. Over the course of 24, he first said that Sri Lanka would respond in detail, and then told mainstream media we would not. On May 10th, our foreign minister in the company of the President said that we would not respond to the report. In mid-April, before the UN officially published the report, government spokesmen said that a detailed response to the report would be made. Political parties like the TULF supported this stance. Mainstream media on May Day (1st May) reported that the government would in fact respond to the UN in the course of a week. However, a week after, the foreign minister said that the government would not send a response.

And while media this Sunday reported that India was to send a high level delegation to Sri Lanka to discuss matters arising from the UN report, the government denied it yesterday, though some web media accounts suggest the President wasn’t even aware of such a delegation. As the Sunday Times notes succintly,

“There have been so many contradictory views expressed by the government regarding the Report of the UN Panel of Experts it is difficult to gauge the government’s exact stand. External Affairs Minister G.L.Peiris attempted to put the record right by way of a special statement in Parliament on Tuesday, but with so many members of the ruling party taking upon themselves the role of spokesperson for the government on the issue, the record is unlikely to be ever set straight.”

Add to this the madness over a government led signature campaign currently doing the rounds in Sri Lanka against the UN Panel’s report, which in Jaffna was reported to have gone on little short of a rampage to force people in the North to sign their names to it, under false promises to boot. Detailed coverage of this can be read in Anti-UN sentiment in Jaffna: Fact or fiction? and our take on the campaign itself in Petition against UN Panel’s report on accountability: Opposing what exactly?
Internationally, the pressure is building up. The African National Congress (ANC), the US and a joint EU statement have all come out strongly in support of the UN Panel’s report, despite diplomatic efforts to counter this support. And while Goatabaya Rajapaksa noted Russia’s and China’s support in the government’s opposition to the UN Panel’s report, he conveniently forgot to address a news article that expressly noted the concerns of both countries,

“Russia and China have expressed concern to the Government of Sri Lanka with regard to any activity that could embarrass international organizations and their officials serving in the country… They have warned the government against staging protests and rallies insulting the UN Secretary-General in the country. The two powerful allies of Sri Lanka have told the UPFA government that if such moves were to continue unabated they will be compelled to review their stance of standing up for the Mahinda Rajapaksa administration.”

Reading the local media and going by official pronouncements, it is hard to discern a coherent response by the government even in its opposition to the report. There is no clear coordination, no plan for managing the short and long term fallout of the report, no real engagement with its contents. Adding to this monumental incoherence, and perhaps on account of it comes propaganda from private enterprise, couched as somehow ‘international’ in nature. The Daily Mirror today runs a full page add attributed to the ‘International Accountability Network’. It’s website is noted as www.inaccnet.com, which when entered resolves to www.inaccnet.org. A high resolution scan of the advertisement can be downloaded here. One recognises that its content is largely from content first released into the public domain recently by Government MP Rajiva Wijesinha on his blog and in the state-owned Daily News, in text and as a PDF.

The ’International Accountability Network’ is a fascinating, recent creation. It was registered late March 2011 by an individual called Chirasthi Perera. The domain name record notes the registrant as one Arnold Chira, though a simple Google search of the associated email (a Gmail account) reveals the real name, and a personal website which has his CV. Clearly, the man has some technical training, but particularly revealing is that the one non-related referee noted in the CV is Dr . Thiran De Silva, Head Of IT, Sri Lanka Army along with the fact that this individual is currently a Web Consultant/Trainer to Sri Lanka Army. The ’International Accountability Network’ website is, politely put, a dysfunctional mess with content largely automatically generated from various web (RSS) feeds. The little human curation of this content suggests that the site’s owner seeks to expose the double-standards of the US in supporting the UN Panel’s report in light of the events surrounding the murder of Osama Bin Laden. Absolutely no details about what is exactly is ‘international’ about this ‘network’. Few of the links on the site in fact work. This is most unfortunate, because Chirasthi Perera is associated with other leading sites like Colombo Fashion (as its CEO), Sri Lanka: Awake in a Miracle (sic) and the yet to be launched Colombo Night Life, sites that are clearly about issues of war crimes, crimes against humanity, justice and accountability. Not.
A full page, full colour ad in the Daily Mirror is very expensive. With associations to the Sri Lankan Army, the ‘International Accountability Network’ can well afford it. We wonder though, given the government’s utterly disconnected and disingenuous responses to date over the distressing content in the UN Panel’s report and the concerns noted therein, can we afford it?