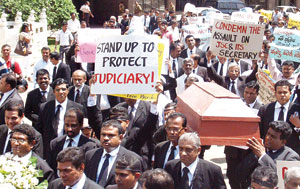 Jehan Perera
The crisis that is brewing between the executive and judiciary is a sign that the system of checks and balances continues to be functional. In the past eight years since President Mahinda Rajapaksa became the Chief Executive the accumulation of power in the executive branch of government has grown apace and appears to be an unstoppable march. It was thought to have reached its apogee with the passage of the 18th Amendment to the Constitution by the present Parliament with a 2/3 majority. One section of this Amendment gave its assent to the President taking over the powers of appointment of heads to all key departments of government.
This was a power that the previous 17th Amendment had thought fit to share between Parliament and the Executive President. This power sharing Amendment had been passed unanimously by a differently constituted Parliament a decade earlier.

It was disappointing to see senior members of Parliament, especially those on the side of the government, who had both publicly and privately expressed their disagreement with the 18th Amendment, nevertheless voting for it in Parliament. Among those who voted for the Amendment were those who had been elected as opposition Parliamentarians, and who had crossed over to take over ministerial positions in a jumbo cabinet of ministers of over 50, which was expanded to accommodate such crossovers. The critics of the 18th Amendment who voted for it were cognizant of the political reality that the government leadership would brook no opposition to the 18th Amendment which additionally gave to the President the right to run for unlimited terms of office, and not for just two as had limited the incumbency of previous Presidents.

The process of centralization of power is set to continue. The government has now presented the Divineguma bill to Parliament that is meant to concentrate economic power in the hands of the Economic Development Ministry. The democratic world long ago decided to put limits on the concentration of powers in the hands of a few individuals. But, in Sri Lanka this logic is turned around on its head, and its greatest triumph of modern times that saw the demise of the LTTE is now sought to be emulated in other spheres on the same basis of unmitigated concentration of power. The proposed new law will consolidate economic resources that have been decentralized to statutory government authorities and to elected Provincial Councils and give the overriding decision making power to the Economics Ministry.

If it was hoped that the elected Provincial Councils would fight to retain their devolved powers and economic resources, it was a misplaced hope. They voted to give away their powers to the government. Ironically, the proposed law has been challenged in the Supreme Court not on behalf of the eight functioning Provincial Councils but on behalf of the sole non-functioning Provincial Council, the one for the Northern Province. This was the one provincial council from which a fight to retain provincial powers could realistically have been expected. Perhaps it is for this very reason that the government has so far failed to hold provincial council elections for the Northern Province.

Several parties including a political party, a civil society group and an affected public official have filed cases before the Supreme Court hoping to halt the centralizing government juggernaut. The Sri Lankan Constitution provides for the independence of the Judiciary. However, the ability of the judiciary to check the Executive is a limited one in the Constitution. On the other hand, the Courts have a limited power to review legislation. Such judicial review is confined to a pre legislative rather than post legislative review. The Supreme Court ruling that the Divineguma Bill should be approved by all the Provincial Councils before it can be passed by Parliament appears to have disturbed the government and led to a train of unacceptable actions and rumours, including the impeachment of the Chief Justice. It appears that the government approach is that the judiciary is not to there to thwart the will of the government that the opposition political parties are unable to do.

The concept of judicial independence is that the judiciary needs to be aloof from influences, partisan interests and fear of the other branches of government. The rationale for this independence is to ensure that justice is impartially dispensed and this is not possible unless the Judges have independence to decide without fear or favour. The Supreme Court and the judiciary it leads need to be appreciated for being willing to be a check and balance on the power of the government. The credibility and legitimacy of judicial decisions also need to be based on a realization of the limits of judicial power. There is nothing to stop the government from passing yet another Constitutional Amendment using its 2/3 majority to overturn a judicial decision.

The Pakistan case is not applicable to Sri Lanka at the present time. In the case of Pakistan, President Musharaff was an unelected President who chose to confront the Chief Justice and the judiciary in his waning years when he was highly unpopular with the masses of Pakistan’s people. In Sri Lanka, on the other hand, the President and his government are both popularly elected and are continuously re-affirming their popular mandate by winning local and provincial elections, albeit by hook or by crook. There are, alas, no short cuts to saving Sri Lanka from the perils of over-centralised power and the abuse of power that will invariably accompany it. The opposition parties cannot abdicate their role of being a powerful voice and educator of the people for political reform. Among other things they could be doing they need to convince the defectors from their parties who give the government its 2/3 majority to come back.
IS