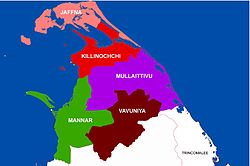 One of the most important priorities of the Sri Lankan Prime Minister Mahinda Rajapaksa, who was sworn in on Sunday morning [August 8] will be the development of the Tamil-dominated Northern Province, which surprisingly unseated the Tamil National Alliance as the sole representative of Tamils.

“A great deal was done under difficult circumstances [in the Northern Province] during the tenure of my last government. This work, which was unfortunately disrupted in the last few years, will be resumed and expedited,” he said in his first interview, just before he was sworn in Prime Minister. 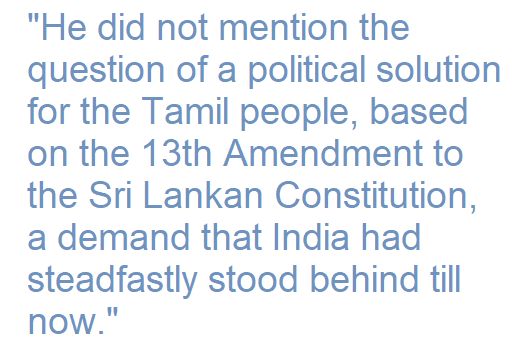 Rajapaksa said that he and his government had done a great deal of work when in power till end 2014. In the post-war years (since May 2009) the government spent the first year in clearing landmines and searching for weapons across the north. Access to the north was restricted on a need to basis. Around mid 2011, Rajapaksa, then President, announced a slew of schemes and launched a massive development programme for the north. This included the widening and relaying of roads; re-building bridges and causeways; restoring the rail link to the north, development of the fishing and other harbours, including the Kankesanthurai harbor with Indian assistance; establishment of governance structures in the north (which did not exist until then because the Tamil Tigers controlled large swaths of territory); and pushing for better integration of the north with the rest of the country. He topped this with the conduct of provincial elections to the Northern Province – the only province at that time without an elected Chief Minister – in late 2013.

“Our government will cater to the needs of all our citizens, irrespective of race or cultural background. There are urgent priorities in the Northern Province, with regard to livelihoods, irrigation for agriculture, the upgrading of exports and the improvement of facilities in health and education,” Rajapaksa said when asked what this victory meant for the people of Sri Lanka, particularly the Tamils in that country. He did not mention the question of a political solution for the Tamil people, based on the 13th Amendment to the Sri Lankan Constitution, a demand that India had steadfastly stood behind till now.

Conceding that he was humbled by the massive mandate, he was of the view that the “overwhelming mandate shows that the people have confidence in this administration. They have outright rejected the previous one. I believe they did so with a lot of great expectations. Now, we have a responsibility to deliver.”

Outlining the most important task before him, he said that the first priority was the economy. Sri Lanka, like most developing countries was reeling under the impact of COVID-19-induced economic problems. In fact, the country had to restrict import of several items to preserve foreign exchange. Two main generators of foreign exchange, tourism and remittances from West Asian nations and elsewhere, have almost dried up. “Our most important priority for all Sri Lankans is to address the economic impact felt by all as a result of the COVID-19 pandemic,” he said. He was certain that his government’s handling of the economy would decide the fortunes of the Sri Lanka Podujana Peramuna (SLPP), his party, in the years ahead.

On the India question, Mahinda Rajapaksa refused to be drawn into the debate surrounding India-China issues. “As I always say, India is our friend and relation. I am thankful to Prime Minister Modi for his warm wishes. He was the first world leader to call me. Our cooperation extends to a number of areas. We’re hoping to take those forward for the mutual benefit of both countries,” he said.