One in four Sri Lankans would like to migrate if they had the chance, a survey finds 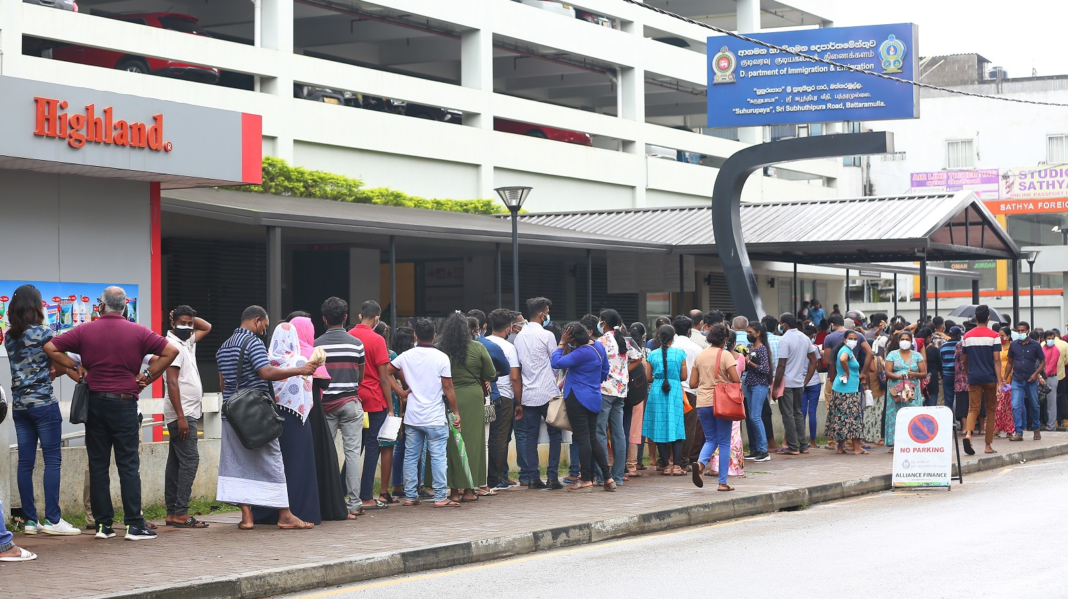 Image: Long queues at the passport office, Colombo (Photo courtesy of The Morning)

A new survey shows that increasing numbers of Sri Lankans want to leave the country, probably more than at any time in the past five years.

The findings were released yesterday by compiler of the survey the Institute for Health Policy (IHP) via the Sri Lanka Opinion Tracker Survey (SLOTS) that was launched to assess public opinion as the country recovers from COVID-19.

IHP said survey findings confirm recent observations by Prime Minister Mahinda Rajapaksa that the youth who had voted for the Government are now queuing up to obtain passports to go abroad.

About one in four Sri Lankans would like to migrate if they had the chance.

The youth and the educated want to migrate the most, with around one in two of them wanting to leave the country.

Of those who would like to emigrate, one in four have plans to do so, or one in 16 Sri Lankans.

Prime Minister Rajapaksa’s point that it is the youth who most want to emigrate does seem to be correct, but the survey also sheds light on his other claim that this is driven by disenchantment with the Government.

The survey revealed sizeable disenchantment of voters who voted for President Gotabaya Rajapaksa in 2019, with many unwilling to say they would vote for him again, although most also did not express support for anyone else.

Amongst adults who voted for President Rajapaksa, the desire to emigrate is most strongly influenced by being degree educated and having higher income, whilst disenchanted Rajapaksa voters are three times as likely as other loyal Rajapaksa voters to choose to emigrate. Pessimism about the economy and dissatisfaction with the Government’s COVID-19 response appear to be key drivers of disenchantment. 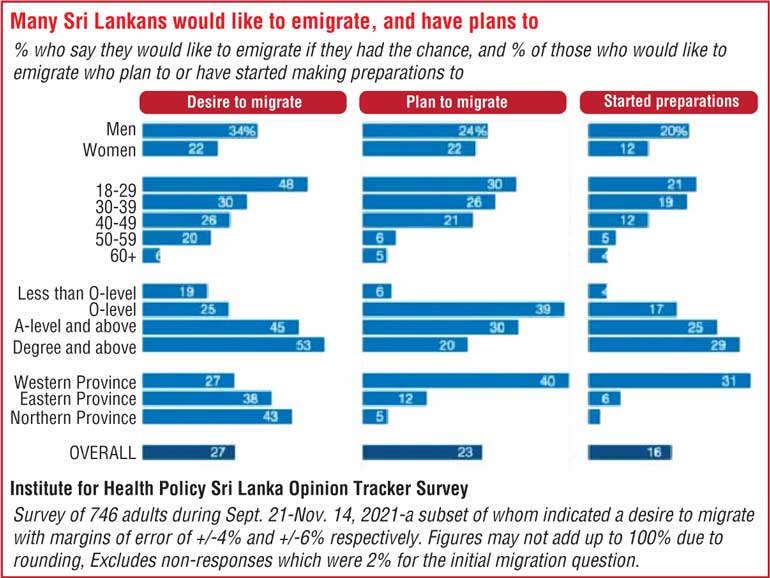 Across a range of questions, disenchanted Rajapaksa voters also favour stronger control of COVID-19 in future. Around one in two say that less than 100 COVID-19 deaths a year would be acceptable as the country relaxes restrictions, compared with two-thirds of loyal voters who consider 1,000 deaths a year or more to be acceptable.

Dr. Ravi Rannan-Eliya, lead investigator for the survey, commented that the data implies that the shift in official policy from early 2021 to tolerate greater spread of COVID-19 has cost the Government significant support as most voters prefer greater control of the virus.

He added that the only positive aspect for the Government is that many disenchanted Rajapaksa voters do not appear to have switched their support to other parties, but this might only be a matter of time.

But he also noted that from a national perspective the increased pressures to emigrate by the youth and the most educated and affluent in society bodes badly for the country’s future economic and social prospects as global travel restrictions are lifted.

IHP is an independent, non-partisan research centre based in Colombo, Sri Lanka. The SLOTS lead investigator is Dr. Ravi Rannan-Eliya of IHP, who trained in public opinion polling at Harvard University, and who has conducted numerous surveys over three decades.