On the President, Judges and encounters of a curious kind – Kishali Pinto Jayawardene 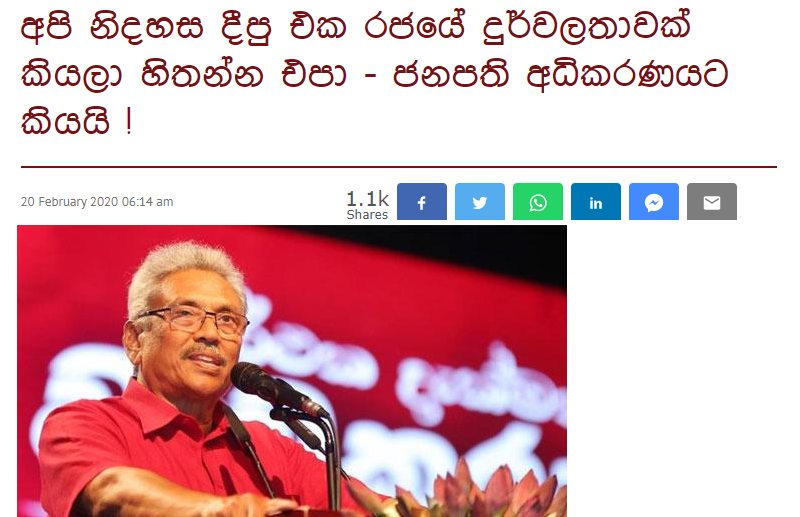 Image: On 19th at a public meeting in Galaha, President Rakapaksa has said that ” Do not consider the independence given to judiciary as our weakness.” (Lankanesweb)

When Sri Lanka’s President, Gotabaya Rajapaksa reportedly articulates that, ‘unnecessary judicial interventions are harmful to democracy’ (The Island, February 21st, 2020), one is intrigued.

Pray, what would a Presidential definition of ‘unnecessary’ be, it might be ‘necessary’ to ask? That question becomes pertinent in the context of strange developments in Sri Lanka during recent months impacting on the very function of judges, judiciary and the law, which have been the theme of this column for some weeks now.

But, of course, the President’s reported sentiments must be read in context. What was said at one of Colombo’s numerous law conferences recently is that, while the executive and the legislature must not interfere with the judiciary, the judiciary also must not interfere with other arms of the State. In theory, there is nothing very problematic about this reminder as it is the fundamental principle underlying the separation of powers after all. Equally, the President’s injunction that, even if the independence of the judiciary is secured, it will not suffice to deliver justice if the judicial system is ineffective and sluggish, is only commonsensical.

But these sentiments need to be read against the bizarre praxis of what is actually happening in the country. It seems that judges are also expressing their angst regarding the stranger-than-fiction dramas that are played out in their courts. This week, Colombo Fort Magistrate Ranga Dissanayake called the country’s premier criminal investigation agency, (the Criminal Investigation Department) sharply to order in regard to its pussyfooting around a suspect relative of the Rajapaksas who had been in hiding overseas in relation to a multi-million dollar aircraft deal gone sour, with all its predictable elements of alleged money laundering, political payoffs and other encounters of a hugely corrupt kind.

His questioning as to why needed documentation in relation to the law under which the suspect was produced (which would have had the effect of denying bail) had not been put forward by the CID is an exemplar of judicial fortitude in the face of clandestine machinations. In other words, it is a good lesson to judges who think that they must shiver and shake before politicians. In other strange happenings, a ‘missing Admiral’ who absents himself from High Court hearings into the monstrous abduction of Tamil and Muslim children more than a decade ago, presented himself before a Commission of Inquiry probing political victimisation during the previous regime to belabour his grievance that he had suffered political persecution during that time.

His somewhat incredible explanation advanced with commendable flair and aplomb was that action had been taken against him in court to please the US and its visiting (then)Ambassador to the United Nations. True, ‘yahapalanaya’ flirting with significant and insignificant visiting personages of every shape and size in the wake of the 2015 election victory, had quite quickly become one of its more annoying manifestations. Indeed, this was to become a not inconsiderable factor for its downfall even as ‘yahapalanaya’ grandees in their Colombo ‘bubble’ traded perks of power rather than reaching out to rural constituencies which had propelled them to that amazing win.

Attended by adoring cheerleaders, this circus of passing visitors on whistle-top tours was seen with a jaundiced eye by Sri Lankans of all persuasions and not only those linked to the Rajapaksa camp. This was a reality that many found hard to come to terms with. Even so and conceding such manifest idiocies often commented upon in these column spaces at the time, it is a fantastic notion to argue that an Admiral of the Fleet could be charge sheeted in court in connection with the abduction and disappearance of 11 children in 2008-2009 to please a US dignitary. It requires a little bit more than the usual slack-jawed cynicism to take this notion on board.

But lets look at this argument at its very core. Even if this is to be taken seriously, is it not the duty of the court entrusted with the case to determine as to whether or not an accused is guilty of the crime for which he or she is charged? In this case, no less than a special High Court-at-Bar has been constituted to hear the matter. Consequently, in the name of all that is marvelous, how can a fact finding Commission of Inquiry be entrusted with that task, if indeed, the Commission on probing political victimisation has been warranted by the President to so engage?

If so, then this surely amounts to a fundamental breaching of the Rule of Law and the separation of powers which President Gotabhaya Rajapaksa referred to. The fact that the Attorney General has been directed to place all documentation pertaining to this case before the Commission is not reassuring. If the ‘yahapalanaya’ regime manipulated and twisted prosecutions to suit a political motive, engineered by a motley cabal of insiders and outsiders at Temple Trees, at the (uncertain) dictate of then Prime Minister Ranil Wickremesinghe which seems to be the clarion call of this Government, let the courts decide the fate of the cases that were lodged.

Ironically if not funnily, most of these cases have been thrown out of court anyway for technical or substantial failures. Indeed, this only goes to prove that even if a selected few were handling prosecutions in devious strategies, they were notably so very inept that they did not know the basics of penal law and procedure. ‘Yahapalanaya’ Ministers on the other hand, allege that the failure of the prosecutions was due to a fifth column, operating to the command of the Rajapaksas in the corridors of the Ministry of Justice and the Department of the Attorney General.

Wherever the murky truth lies, all these are long familiar tricks of the trade to Sri Lankans. We have undergone cycles of circumvention and mockery of the law again and again. We are, in truth, weary of these games. During the Rajapaksa (the First) Presidency, the Secretary of the Judicial Service Commission (JSC) was assaulted and stabbed by unidentified persons on a busy road close to leading hotels in Mount Lavinia and had to be hospitalized. His ‘crime’ was to issue a statement stating that the JSC, (which is responsible for the administration of Sri Lanka’s justice system,) was being targeted for criticism by politicians in power. Other similar incidents are too numerous to list here.

‘Yahapalanaya’ or the Rajapaksas regardless, the remnants of the Rule of Law in Sri Lanka can be saved only by individual citizens standing up to what is right and correct in their own way. Brave Magistrates and courageous public servants like a District Assistant Conservator of Forests who recently created a firestorm in the media by standing up to an asinine State Minister of Fisheries trying to build a playground on a protected mangrove site, fashion the Sri Lankan national character.

It is on these examples of remarkable grit that the nation will stand or fall.