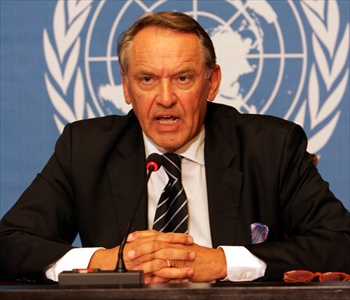 By Matthew Russell Lee
UNITED NATIONS, December 5 -Three weeks after the UN released a redacted version of the delayed report into the UN’s actions and inactions in Sri Lanka in 2009, Inner City Press on Wednesday asked Secretary General Ban Ki-moon’s spokesman if any movement has been made on the commitment to set up another senior group to review the findings of this Charles Petrie report.

In the intervening three weeks, Inner City Press has asked this without answer. But on Wednesday, Ban’s spokesman Martin Nesirky had an answer: the review group is being set up under Deputy Secretary General Jan Eliasson. One hopes it might be a credible review and lead to accountability.

Inner City Press also asked about reports that Sri Lanka General Shavendra Silva, who appears in Ban’s first Sri Lanka report on the killing of civilians, depicted in connection with war crimes like the shelling of hospitals.
(Silva also appears in UK Channel Four’s Sri Lanka documentaries, and was allowed to present the government’s “Lies Agreed To” in the UN Dag Hammarskjold Auditorium, with repercussions that continue still.)
Now Silva despite his past, is reported to be inspecting the troops in Lebanon, in the UN peacekeeping mission. Inner City Press asked for confirmation and comment, given Silva’s controversial and then limited service on Ban’s Senior Advisory Group on Peacekeeping Operations, and where the SAG report is.
Nesirky referred both of these questions to the Department of Peacekeeping Operations, whose chief Herve Ladsous has at least three times on UN TV since Silva repercussions in May refused to answer any Press questions, including about Silva’s role as a Senior Advisor on UN peacekeeping. So we’ll see. Watch this site.

Footnote: for the “Ask State” Department session Wednesday morning with Under Secretary Tara Sonenshine, Inner City Press asked, “What will US do after the Sri Lanka Petrie report to ensure the UN doesn’t again withhold info as 40,000 are killed?” But there’s been no answer from #AskState. Yet.
ICP