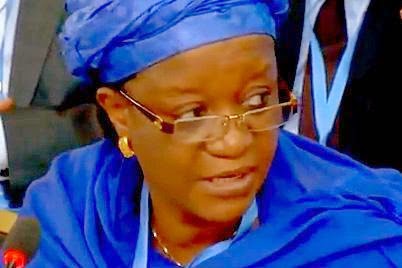 Matthew Russell Lee
UNITED NATIONS, April 24 — Amid reports of rapes in Sri Lanka targeted at Tamils, Inner City Press on April 24 asked the UN’s Zainab Bangura, Special Representative of the Secretary-General on Sexual Violence in Conflict, what if anything the UN is doing about it. UN video here from Minute 15:15, Inner City Press video here and embedded below.
Bangura replied that she is “concerned, worried” and has spoken with Sri Lanka’s Permanent Representative, Palitha Kohona, about it, urging him that Sri Lanka designate a “focal person” on the issue.
Inner City Press asked about a report authored by Yasmin Sooka, who previously served on one of the UN’s panels looking at war crimes in Sri Lanka. Bangura said Yasmin will be in New York “next week” and they will meet.

Last week, Inner City Press asked yet another former UN panelist on Sri Lanka, Marzuki Darusman, if he thought the UN’s response to his report had been successful. Darusman cited the example of Cambodia, for the proposition that justice can take a long time. But how long?

The UN can’t even keep track of its own statements. On alleged rapes by UN peacekeepers in Mali, the UN told Inner City Press in January that the investigation was finished. Then on April 23, the UN’s Mali envoy Bert Koenders said it won’t be finished for two or three weeks, but predicted or pretold that the UN peacekeepers will be cleared.

Bangura, when Inner City Press asked, didn’t know which was true, or any update on the rape charges against UN peacekeepers themselves.

Combined with the UN’s refusal to be accountable for, or even acknowledge service of legal papers on Ban Ki-moon about, bringing cholera to Haiti, how can the UN effectively push for accountability by anyone else? We’ll see. Watch this site.
ICP
Share
Facebook
Twitter
WhatsApp
Pinterest
Email