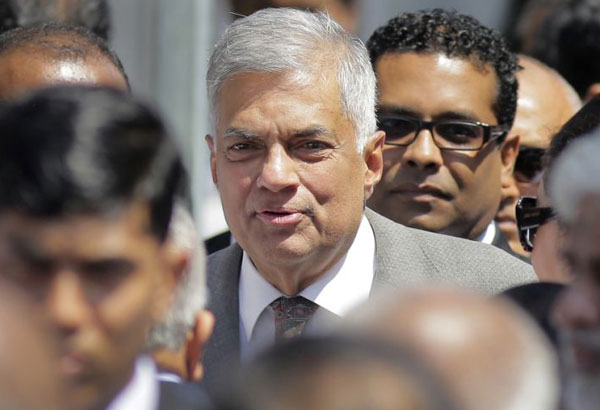 The misplaced ecstasy of those who greeted Prime Minister Ranil Wickremesinghe’s appearance before the Commission of Inquiry into the Treasury Bond Issuance early this week with cries of ‘Bravo”, (including former President Chandrika Kumaratunga), was equaled only by the palpable agony of those who watched the unfolding scenario with disbelief.

Need for some gravitas
Here was the Prime Minister of the ‘yahapalanaya’ unity alliance elected into power in 2015 on the platform of reversing the abuses of the past finding himself in an unpleasant situation where his presence was deemed necessary to clarify details of a gargantuan financial scandal swirling around the Central Bank of Sri Lanka implicating his own party and crony capitalist associates. Never mind the sophistry regarding whether he was summoned or came voluntarily for the Commission sittings. Even if his presence was voluntary, the mere fact that this was deemed necessary should have compelled some necessary gravitas. But that was not the case.

At one level, there is some empathy with the Prime Minister’s matter-of-fact comment at a symposium on cyberspace during a state visit to India some days later that, after opening the internet without any fetters to the Sri Lankan people, he has become the most maligned politician in the country. The incongruity of this statement being made in a background where the first banning of a news website (however dreadful and salacious its content may have been) had taken place weeks ago is beside the point.

The fact remains that this Government has indeed taken bold strides in bringing about an environment where critique and dissent flourishes in Sri Lanka. This is no special thing however, as one might add. On the contrary, it is the minimum of the democratic standard. And ruling politicians who pat themselves on the back for this ‘achievement’ comparing it with monstrous Rajapaksa excesses should be subjected to a reality check.

No cause for joy
But this whole debate is quite a different matter to the Central Bank bond scandal. Efforts made by the United National Party government to cover up this scandal with lame complaints that it was a ‘mere’ conflict of interest matter, the appointment of a committee with no credibility to inquire into the allegations and the later subversion of the report of a parliamentary committee through ‘footnotes’ is now all a matter of record. It does not make for pretty reading, let us be clear.

In that backdrop and with the Presidential Commission of Inquiry proceedings revealing startling details of the wheeler-dealing that went on, the Prime Minister’s appearance at the Commission was no cause for joy. That much must be emphasized. Hence President Maithripala Sirisena’s fury in regard to the ‘young bucks’ in the Government challenging him and his decision to appoint a Commission of Inquiry into the matter is understandable.

On its own part, the Commission has got swept up in a firestorm that must certainly not to be to the liking of its good members. Indeed, the predicament that it is in illustrates why many independent personalities prefer not to court such controversies by engaging in inquiries that inevitably lead to entanglement in the ‘political thicket’ as it were. It has become a case of the Commission having to suffer blows from all sides.

Intertwining the Commission proceedings with the law
It is an interesting question if the unwarranted laxity on the part of counsel from the Attorney General’s Department and counsel from the unofficial Bar that has been daily evidenced in proceedings before it, would have been evidenced if these events had taken place in a court of law. The answer to that question is self-evident. It would not have.

Certainly the drama before this Commission has been aggravated by the behavior of counsel of the AG’s Department before the Commission which cannot be condoned even though they are lionized in some quarters. Inexcusable excesses in language and behavior on the part of one counsel at least has led the Commission itself to reprimand him severely.

There are clear precedents urging caution in this regard. That is so, even when the final findings of a Commission of Inquiry are in the public domain. One example concerned the arrest and detention of police officers in connection with the findings of the Batalanda Presidential Commission (1998). Their complaint before the Supreme Court that their fundamental rights had been violated as they had not seen the report, nor did they know what exactly they were accused of, was upheld.

Observing principles of natural justice
A three member bench of the Court pointed out that rights protection was held available to all, even alleged rights violators (I. Jayaratne v. de Silva and others S.C. (FR) No. 609/1996, SCM 21.09.1998. Its language was exceptionally stern, warning that allegations of misconduct must be dealt with promptly and effectively but cannot be contrary to basic constitutional safeguards.

Similar cautions have been issued under the 1978 Special Presidential Commissions of Inquiry Act in relation to the findings of the Lalith Athulathmudali Commission. Basic principles were laid down. Once allegations are made against an affected person by investigators of the Commission, the Commission should itself question him.

Handing over this responsibility to the team of police officers authorised to investigate and record the testimony of persons is not sufficient. It cannot be said that it would be impracticable for the Commission itself to hear and interrogate large numbers of individuals. Any affected person implicated by the findings of the investigators ought to have been so informed and heard before any recommendation was made on such findings.

Remedying the public deficit of trust
Properly mindful of these cautionary principles, members of the Commission of Inquiry into the Treasury Bond Issuance have vigorously refuted the claim that any action was taken against any individual based on directives issued by it. That would be a direct violation of the principles of natural justice, it has declared.

All in all, these controversies give rise to interesting and even amusing conversations. But even at this late stage, there is need for a sober re-evaluation of precisely how that exhilarating electoral ‘yahapalanaya’ moment in 2015 could have led to this week’s most disturbing of occurrences. Posters pasted on the city walls hailing the Prime Minister as a hero for ‘deigning’ to appear before the Commission does not suffice to address the public deficit of trust in the Government.

Without question, that must be remedied urgently.