On (badly behaving) politicians and the media – Kishali Pinto Jayawaradene 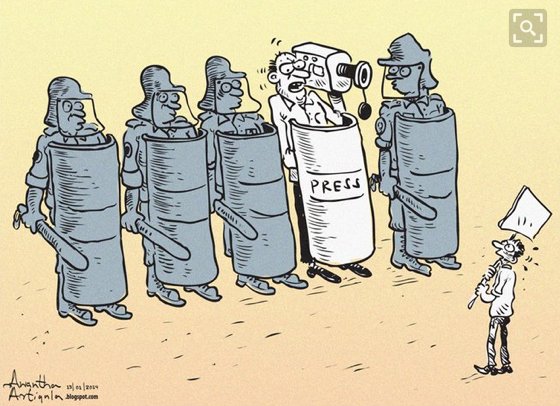 White vans and ‘black media’ aside (which I will return to later), Sri Lanka has seen politicians insulting judges in Parliament under cover of parliamentary privilege in the past.

Each time, these attacks have been discomfiting, indicating the extent to which the ancient law of privilege can be abused for partisan political advantage. Even so and notwithstanding that unpleasant history, this week’s attack on particular judges by a Rajapaksa frontline supporter in the House on the basis that only judicial officers of a ‘Christian’ persuasion are promoted and that favouritism is shown to a selected few in the judicial service by the recommending body (the Constitutional Council) is by far, the most staggering if not scurrilous abuse that we have heard up to now.

It is direct intimidation of the judicial institution, once the Rajapaksas’ favourite plaything when they brought a sitting Chief Justice to Parliament to undergo a show impeachment, subjecting her to vulgar cross-talk. The fact that such allegations are made unabashedly and with a straight face says much for what Sri Lanka has become today, a seething pot of racist, religious and communal hatreds as opportunistic politicians stir the toxic brew with relish.

Far from learning from one’s mistakes and progressing to a better standard of political engagement with the polity, the Rajapaksa camp appears to be descending to unplumbed depths of disgraceful conduct. Quite apart from levelling this allegation in respect of the promotion of judges, the same reference was made to the selection of cricketers (‘Argument in Parliament over ‘faith’ of judges.’, Daily Mirror, 11.01.2019). Is there nothing that will not be said in the desperation to score political brownie points?

Former President Mahinda Rajapaksa should call his venomous mouthpieces to heel if he has a smidgen of political good sense left in him. While frustration in the face of the humiliation that he suffered recently is understandable, having to step down from a Prime Ministerial seat (which he occupied like a thief in the night as cartoonists unmercifully depicted), this is assuredly not the way to go about it. And if any remain among thinking people in this country who would close their ears and cover their eyes pretending to ignore the dangers of communal and religious friction now being propagated, that would be very foolish indeed.

The question becomes in truth as to why parliamentarians are allowed to make such vituperative and wholly unsupported claims with impunity? Codes of conduct for these characters will not go far to address the issue. Let us not forget that these are the very same individuals who, not long ago, sat on the Speaker’s Chair, poured water on it while crudely insulting him and threw religious books, a copy of Erskine May and chillie water into the eyes of policemen standing on guard.

This was possibly the point at which many Sri Lankans watching the commotion aghast and open-mouthed, decided that enough was quite enough. While there are many eminently good reasons to be disgusted with parliamentarians on both sides of the House, that level of vulgarity that we saw during those incidents on the part of Rajapaksa supporters was, quite simply, unparalleled. The fact that those responsible later apologised should not be the end of it. These apologies are not worth their proverbial salt, much like a former Chief Justice once apologised for a judgment that he had given exculpating former President Rajapaksa of misappropriating tsunami funds.

Amendment of the privileges law?

Sri Lanka should look to revising what constitutes parliamentary privilege which we inherited as a colonial legacy. Even if we retain this idea of ‘privilege’ which has been drastically reduced in other jurisdictions on the basis that parliamentarians do not merit special favours, the law should incorporate the modern concept of parliamentary duties. Rights must always be accompanied by duties. And parliamentarians cannot be an exception thereof. The country’s original Act (1953) has been amended on several occasions to afford more privileges to members of parliament. This time around, amendments may impose duties of good conduct and good behaviour. Merely having elections that would bring the same disreputable characters back into the House will not do.

But now let us come to the ‘black media’ frenzy. Protests held in front of media houses by demonstrators clad in black and holding black banners calling for the media to be independent some days ago resulted in hysterical outbursts of ‘media intimidation’ by some electronic media institutions. References by Prime Minister Ranil Wickremesinghe to ‘black media’ is unfortunate, (nothing is ‘black’ or ‘white’ as the Prime Minister himself should surely well know).

Nonetheless, there is singular hypocrisy in former President Rajapaksa waxing eloquent on a free media when the highest levels of killings, intimidation and threatening of journalists occurred under his Presidency. As annual events take place to mourn Sinhala and Tamil editors and journalists killed in the line of duty during past decades, it is equally hypocritical that United National Party (UNP) parliamentarians in the Government speak in hushed voices of the dead while completely bypassing the duty to bring to justice, those responsible for the atrocities.

Restraints on media as much as parliamentarians

It is of no use naming model villages after these journalists (as the UNP’s Housing Minister announced a few days ago) if the law is not worked properly to punish the perpetrators. While the reasons for moving slow on these cases may be an open secret, let us have no humbug in public. Yet sanctimonious humbug and politicians are so intertwined that it is impossible to separate one from the other. This is the inescapably ugly reality that we need to confront and call out on.

But to return to the protests which stirred up a media storm, there is little question that, as much as parliamentarians need to be restrained from abusing the privileges afforded to them, the media cannot take cover under the label of ‘free media’ and espouse blatantly partisan and communalistic coverage.

Certainly the media needs to operate within a legal and ethical framework that is self-regulated but effectively so. In the alternative and faced with media that has lost its credibility, the interest of the public in ensuring that the media remains independent from state regulations with all its inherent risks will fade, thereby paving the way for state regulated media which can never be a good thing.

These are warnings that need to be taken to heart in all seriousness.