On Anniversary, a Victory Parade and a Crackdown in Sri Lanka 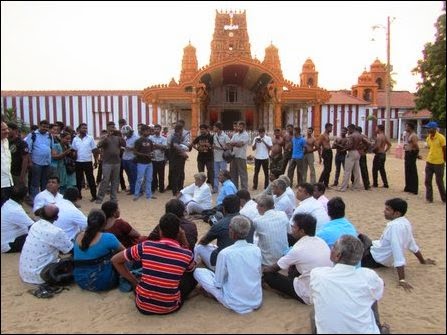 NYT-
Sri Lanka’s government on Sunday marked the fifth anniversary of its victory over Tamil insurgents with a military parade in the south and a broad crackdown on journalists, opposition politicians and students in the once-restive north and east.
Government troops largely sealed off the offices of Uthayan, a newspaper based in the northern city of Jaffna that has long been critical of the governing alliance. The government also closed Jaffna University. In Pottuvil, in the east, troops blocked a meeting of the Tamil National Alliance, an opposition party.
The measures, confirmed by a military spokesman, Brig. Ruwan Wanigasooriya, were part of a crackdown in Tamil-dominated areas intended to prevent open demonstrations of grief for the tens of thousands killed during the country’s 26-year civil war.
Jaffna University teachers and student union leaders said that they had received death threats warning them against taking part in any commemorative events.
“The Tamil people should have the freedom to mourn collectively the untimely death of a large number of members of their community,” the Jaffna University Science Teachers’ Association said in a statement.
In the southern coastal town of Matara on Sunday, President Mahinda Rajapaksa viewed a military parade and air show to mark what his government calls Victory Day. In a speech, he dismissed international allegations that his military had killed thousands of innocent people, saying such claims were attempts to divide the country.
“Five years ago, this land was liberated from the clutches of terrorism,” he said.
The United Nations has estimated that 40,000 people, many of them civilians, were killed in the final stages of the war in 2009. Observers have reported that the government encouraged civilians to enter “no-fire zones” and then shelled those areas. A series of videos and photographs have also leaked out that appear to show summary executions by soldiers. Thousands of people are still missing.
But Mr. Rajapaksa and the military authorities asserted that any outward expressions of grief on Sunday were intended to celebrate the life of Velupillai Prabhakaran, who led a brutal insurgent group known as the Liberation Tigers of Tamil Eelam, or L.T.T.E. Mr. Prabhakaran was killed in 2009.
Maj. Gen. Udaya Perera, a northern area military commander, said that public memorials in the north were banned under the country’s antiterrorism laws, and he said access to Uthayan was restricted because of what he said was a “situation that would be created near the newspaper office to implicate the army.”
The military was conducting security checks only on people headed to the editorial offices, he said. The offices and staff of Uthayan, among the few newspapers to aggressively question government accounts of the war, have been repeatedly attacked.
“If people want to commemorate their loved ones,” General Perera said, “they should hold memorials on the dates of their death. Commemorations on May 18 are memorials for the L.T.T.E. leader Velupillai Prabhakaran.”
Many people in the north have no idea when their loved ones were killed; many of the missing were kidnapped by either insurgents or government forces.