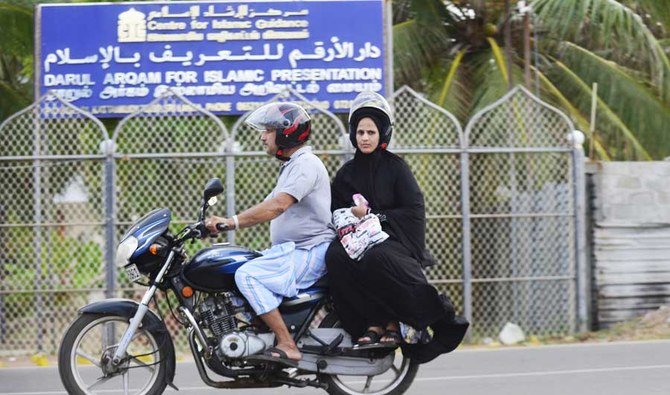 Image: In this photo taken on April 25, 2019, Sri Lankan Muslims ride a bike along a road in Kattankudy. (AFP).

JEDDAH: The Independent Permanent Human Rights Commission of the Organization of Islamic Cooperation has condemned Sri Lankan legislation that allows for the creation of “reintegration centers” as part of a campaign against violent extremist religious ideology.

The commission said that the legislation will permit arbitrary detention of Muslims who will be subject to human rights violations without any legal oversight.

It also said that a newly imposed ban on the wearing of the burqa, under the pretext of counterterrorism measures, “squarely violates minorities’ rights to freedom of religion guaranteed in the International Covenant on Civil and Political Rights.”

The commission expressed its serious concerns over the ban, saying that such blanket measures will violate Muslim women’s religious freedom.

It concluded that such “majoritarian rhetoric and discriminatory measures are contrary to the ideals of pluralism, and counterproductive to social cohesion.”

The commission urged the Sri Lankan government to fulfil its international human rights obligations by protecting the rights of its Muslim minority to practice their religion, free from any coercion or discrimination.

The commission urged the Sri Lankan Muslim community and human rights organizations to use all available domestic remedies, including domestic courts, to overturn what it described as discriminatory laws.