Office of Missing Persons to fund skeletal excavations in Mannar 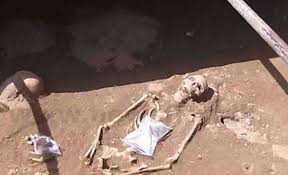 The Office of Missing Persons has decided to step in to fund the excavations of a suspected mass grave site in Mannar ‘as long as necessary’, in the first major step by the permanent office to investigate and trace disappeared people in Sri Lanka in accordance with its mandate. The grave site currently under forensic excavation under the Sathosa building in Mannar has so far revealed the skeletal remains of 62 people since the mission began 48 days ago.

The decision by OMP follows a request made by the Chief Investigation Officer at the Mannar grave site, Judicial Medical Officer Saminda Rajapakshe, the Sunday Observer reliably learns.

“We had already granted funds for the excavation site project in Mannar and have expressed our willingness to support this endeavor in future too,” OMP President, President’s Counsel, Saliya Peris told Sunday Observer last night. The funds from the OMP will cover the basic costs of the forensic specialists conducting the excavations including transport, accommodation and other support services.

Speaking to the Sunday Observer, JMO Saminda Rajapakshe pointed out that while initially the investigation team had been provided accommodation, transportation and food by authorities from state-owned retail shopping chain, Sathosa, their needs were subsequently facilitated by the Ministry of Justice for a period of one month upon their request to the Ministry. “We never wanted to abandon the excavations. Hence, we requested OMP which is also a government related institution to finance the project depending on their capability. They have agreed to our request,” Rajapakshe noted.

Following the discovery of human remains on March 26 at the old Sathosa building in Mannar, further digging at the site was continued under the supervision of Mannar Magistrate M. Prabhakaran. The excavation of the site started on May 28. The excavated skeletal remains have been sealed and placed at the Mannar Magistrate’s Court complex.

There is no decision yet on when the remains will be sent overseas for carbon dating, in order to determine the time frame of the burials. Dr. Rajapaksa said the bones will be shipped to Florida in the United States for radiocarbon dating, once the Ministry of Justice approves the process.

According to Dr. Rajapaksa, the team had unearthed female and male skeletal remains as well as remains believed to be that of several children.

In August 2016, the National Unity Government passed landmark legislation to help thousands of families trace missing loved ones by establishing a permanent Office of Missing Persons. The Office came into operation earlier this year and has been conducting outreach programmes in several districts across the island including the war-affected North and East.