NPP complaints to IGP regarding thug attack on JVP leader 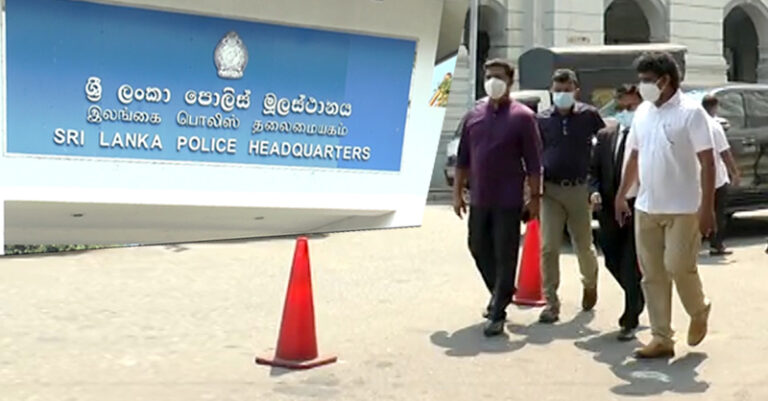 Jathika Jana Balawega Executive Member Mahinda Jayasinghe has lodged a written complaint with the IGP at the Police Headquarters today alleging that the implementation of the law regarding the attack on the Gampaha District Convention of the Jathika Jana Balawega was slow and that the law should be enforced immediately.
The complaint was lodged by Attorney-at-Law Sunil Watagala. JVP Central Committee Member Wasantha Samarasinghe and Dr. Nalinda Jayatissa were also present.

Government behind the egg attack – lawyers of the NPP

Lawyers of the NPP say that it is clear that the government is behind the egg attack carried out by thugs during the convention held to name the Executive Council of the NPP in Gampaha District.
They were speaking at a media briefing held at the JVP head office in Pelawatta today (1st).
Attorney-at-Law Sunil Watagala, Attorney-at-Law Upul Kumarapperuma and Attorney-at-Law Charith Galhena spoke. Attorney Akalanka Ukwatta was present at the occasion.

It is clear that the government is behind the egg attack – Attorney at Law Sunil Watagala
Two persons responsible for the attack on the Gampaha convention of the NPP have been arrested. Judging by the two of the revelations made, it is clear that there is a responsible person or group behind the incident. This is a criminal offence. The basic principles of criminal law have been committed.

It is an attack by an organized gang. What steps has the IGP taken so far? Not even a proper oral statement has been taken. The Sri Lanka Police should find a chain of evidence in this regard. The Police have the ability to go from link to link in this chain. There is the ability to check phones and watch CCTV footage. But nothing has been used so far. Prasanna Ranatunga submitted two letters to the President and the IGP requesting an immediate inquiry. When I saw it, I thought of a thief fleeing shouting ‘catch the thief’. However, we have a question about the fact that a Cabinet Minister has requested the President but not even a statement has been taken from the arrested. Photos of people involved have become public.

One of those who came to the attack was Mahagedara Wijayarachchige Ranmal Asitha Kumara Wijeratne (former name – Gabriel Rathmal Asitha Kumara), and the second is Ananda Bandara. One person is in photos related to Avantgarde. This organized gang is directly linked to Avangarde. One of the President’s closest aides is the chairman of Avangarde.

Today, Minister Ramesh Pathirana says that the attack was carried out to embarrass the government. We say that a group close to the President’s associate’s private security agency was involved in this attack. Therefore, we say that the government is directly involved. The President should conduct an inquiry into this. We have the right to freedom of expression conferred by the Constitution. This is an attack on the NPP as those in the government could not bear the people’s attraction to the NPP. The suspects are in custody. The Police can continue the investigation. We remember the Ambepitiya murder. Another person did the shooting but Potta Naufer was sentenced to death for aiding and abetting. Therefore, the real culprits behind these egg attacks are not those who were bought with Rs. 5,000. The person who instigated this incident is the real culprit. The President should intervene. If the real respondent is not revealed, there is no doubt that the government is behind this. And we are keeping an eye on the inquiries.

The egg is just the beginning. Anything can happen after this. This group including the President should take responsibility for everything – Attorney at Law Upul Kumarapperuma
This incident is no ordinary egg attack. It is not uncommon for an opponent to hit eggs and tomatoes. There is a serious situation behind this. Those arrested have said that this was directed by Prasanna Ranatunga. Preliminary investigations have revealed that one person involved in the incident is associated with Avangarde. What is this Avangarde company? It is a mercenary force that maintains rented arms of the three Armed Forces and the Police in this country. This company has for its use all types of weapons such as T-56, AK-47 T-81 machine guns owned by the Sri Lankan Army. And this is a paramilitary force. There were many criticisms regarding this paramilitary force. Therefore, the business of the company was handed over to the Navy. This company has all the retired Major Generals, Navy Commanders and soldiers. A very well trained army. What is the danger then? What could happen next if this incident is left off the hook?

This is not a typical security firm. It is an armed paramilitary force. The army is responsible to the government. Who is responsible for this paramilitary force? The chairman of this institution has leveled a number of allegations against the Leader of the NPP Anura Dissanayake and the JVP. Challenges have been made. Insulting statements have been made. Who is responsible for a paramilitary force led by such a person? The Ministry of Defense issues the license to paramilitaries to carry arms. Although it is a security agency, the license is issued by the Ministry of Defense. If the people of Avangarde are attacking a party convention, are they doing the duty of the relevant licensed company? The people of this country as well as the Ministry of Defense should think about it. Nissanka Senadhipathi is the messenger to get Ranjan Ramanayake released. MP Geetha Kumarasinghe also asks Senadhipathi to take messages to the President. It shows the relationship between Nissanka Senadhipathi and the President. If so, the President must conduct an inquiry into this. The serious issue here is whether there will be bombs after the eggs. People remember the events of the past. If such attacks are carried out against political parties, what will happen to the common people?

Therefore, the Police should carry out these investigations properly. Get phone call details. Investigate CCTV footage. Get details from phone companies. Find out about the people who dealt with these suspects. The Police have the ability to investigate these. That is how the real culprit can be identified. There are plenty of examples of crime investigations.
The fact that the Police are asleep without even making a statement means that the Police have been influenced. The IGP and other police officers should keep in mind that they are paid from public funds. The Police must also remember that governments do not last forever. It should be kept in mind that otherwise, the Police will have to roam the courts. The egg is just the beginning. It could be anything later. These groups are responsible for everything that happens next. No matter how close Avangarde Mudalali is to him, the President should conduct an impartial inquiry into this matter.

I do not believe that the Police will do justice. The use of thugs in Sri Lankan politics has existed throughout history. With the creation of the executive presidency, the underworld was used. It happened from J.R. onwards Army officers were used. Thugs have attacked artists, scholars, civil society activists, journalists.

Today a different situation has arisen. A paramilitary force has been created to carry out all kinds of dirty work that politicians want without using the Police or the army so that politicians do not get their hands dirtied. This is a dangerous situation. This is also a threat to national security.

Can a Tamil man or a Muslim man maintain a paramilitary force without even statistics on modern weapons? If such a movement is started and if such a license is given when a Rajapaksa is not in power how strong would be the protest against it? If a soldier is given a weapon in the army, he is responsible for the bullet used in that weapon. There is even a number on the weapon of the relevant soldier. A situation has arisen today where a paramilitary force is being maintained by giving arms to a group of undisciplined people who are not responsible to the country. It’s terrifying. Starting with an egg we can be the target. But where does this stop?

In the past, thugs were maintained by MPs and ministers. Ministers and MPs maintained the thugs to carry out the thuggery that the President and the Prime Minister wanted. Today that situation has changed and several businessmen around the President are carrying out this work.

The opportunity has arisen for several businessmen to rule the country by giving the President a huge 2/3 majority in Parliament. One of the businessmen maintains a paramilitary force. This is a threat to the very existence of democracy in the country. A threat to the people’s right to hold an alternative opinion. Therefore, this incident should be investigated not because of an attack on the NPP but because of an attack on the people. Also, the people have a right to know about these perpetrators.