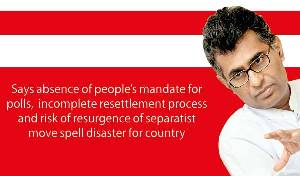 The University Student movement against Indo-Lanka Accord, Janatha Mithuro, National Movement Against Terrorism (NMAT), Sihala Urumaya and the Jathika Hela Urumaya (JHU) – in this unbroken twenty five year history of the nationalist movement in modern Sri Lanka  Patali Champika Ranawaka remains the consistent common factor.
At a time his government is gearing for the Northern Provincial polls the Minister of Technology, Research and Atomic Energy thrashed out a slew of key current issues ranging from power politics to politics of power and energy during his conversation with the Daily Mirror.

Q:  The UPFA Government of which you are a cabinet minister is preparing for Provincial Council election in the Northern Province slated for September. What is the JHU take on the move especially given the fact that you started your political activism protesting against the provincial council system?

We strongly oppose this election. However we are also conscious of the fact that the government is under enormous pressure to go for the polls.
Our opposition to Northern provincial polls is based on many factors.

First of all it is un-democratic.
To hold an election that fails to project the political will of the respective communities in the relevant province is against all the democratic norms. The 13th amendment and the Provincial Council system which were basically meant for the Northern Province were forced on us by the Indian government and they still have not received the people’s mandate. This means they are yet to get the necessary constitutional legitimacy.

Secondly, it’s happening half-way of the resettlement process, when two communities remain yet to be re-settled.

There was a systematic ethnic cleansing process unleashed by the LTTE and its cohorts against Sinhalese and Muslims since 1971. For an example in 1971 the Sinhala population in the Northern Province was 4.5 percent and Muslim population was 4.3 percent. In 2011 it had been reduced to 2% Sinhalese and 3% Muslims. In the Jaffna district, in 1971, there were 20,402 Sinhalese and 10,312 Muslims. However, in 2011, these figures were reduced to 746 Sinhalese and 1874 Muslims. Racist elements within the Tamil community are still opposing the resettling of those displaced Sinhalese and Muslims. Therefore if we hold the NPC elections without restoring the demographic balance of this province it would be an act of legitimizing the mass massacres and ethnic cleansing that had been carried out by the LTTE.
Thirdly there’s the danger of the Tamil National Alliance (TNA) using this election as a referendum of the Tamil right to self-determination as they did in 1977 under the TULF. If a neo-Nazi type movement gains power in the Northern Provincial Council, it will agitate for extra powers vested in the Provincial Council act such as police powers and even more and will attempt to unsettle the Eastern Provincial Council as well. It may also join hands with the Tamil Nadu government and the so-called Tamil Ealam transnational government of Rudra Kumaran. Besides there’s a strong chance of it using its powers to instigate an intifada type violent uprising aiming foreign interference. Finally it may agitate for an independent seat in the United Nations as well.

As such holding elections in the Northern Province without assessing the real political repercussions will be a political hara-kiri for the entire nation and the unitary character of the State.

Q:     The Tamils in Sri Lanka seem to consider polls in the North as their basic demand and their politicians have been asking for even more. Under these circumstances one may ask how fair is your call?

Tamil politicians have always been advocating unrealistic goals as they have done in the 1970s and 1980s and while attempting to fulfil them they have ruined the future of the entire Tamil community. Now the same demands are being put forward almost triggering a second catastrophe for their community.
Moderate Tamils should realize that their living standards are on a par with other communities except in certain areas in the North where the terrorist had been allowed to rule in the past.

While the Sinhalese were chased away from Jaffna the Tamil population in the Colombo AGA division had risen from 23% in 1971 to 33% in 2011 and there are 236,678 Tamils living in Colombo district as a result. So what is the discrimination the Tamils have been subjected to in this country?

Interventions by the US, India and the Tamil Nadu have clearly destroyed the reconciliation process government has launched after a 30 year long conflict. If we are to achieve real peace we should scrap or at least amend the 13th Amendment and enforce the prevailing law equally among all communities in the county. If Tamil politicians want equal treatment they will get it but, if they want a separate state that will spell disaster.