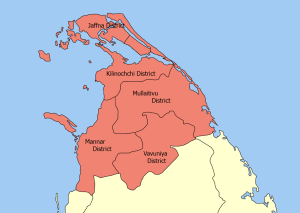 Centre for Policy Alternatives (CPA)
The Centre for Policy Alternatives (CPA) undertook a field visit to Jaffna andKillinochchi districts in April to assess the rule of law and human securitysituation in the areas. The CPA team spoke with a cross section of actors including Government officials, politicians, humanitarian agencies, civil society, media and community groups.1

During the course of the visit, key themes were highlighted as needing urgent attention including security considerations, preparations for Northern Provincial Council (NPC) elections, the recent land acquisition process and its impact over land ownership and demographic change, as well as larger governance issues. These are briefly highlighted below.

Elections for the Northern Provincial Council Considering pledges repeatedly made by the Government of Sri Lanka to the international community2 there has been strong speculation that elections for the NPC will be held during the course of this year. Speculation was further augmented when President Mahinda Rajapaksa, on at least two occasions announced that elections for the NPC will be held in September.3 Although many officials in the administrative service contacted by CPA maintained that they had not been officially notified of any scheduled elections, members of political parties –including those in the UPFA- stated that elections for the NPC will take place this year. Were elections to the NPC to happen, they will be significant as the first elections for the NPC since the enactment of the Thirteenth Amendment to the Constitution.
Although no date has been set for elections, there was a high level of interest among politicians and civil society in Jaffna regarding the holding of elections and its impact. In contrast, there was little interest among community groups as they did not see elections as having a significant long term impact on the quality of life in the area. Many local groups stated that as with previous elections held in the North since 2009, many promises are likely to be made during the  campaign and not kept resulting in no real improvement in living conditions for the ordinary people. There was also a general sense that holding of NPC elections will not deliver on a political solution to the Tamils and that regardless of who wins, there will be very limited scope for the NPC to fully function as provided in the Constitution.
Legal Measures for the Holding of NPC Elections
This will be the first election held for the NPC and therefore certain steps need to be taken prior to the holding of elections. According to Section 10 of the Provincial Councils Elections Act No. 2 of 1988 the President will have to issue a directive to the Elections Commissioner “to hold an election” for the NPC.
The Elections Commissioner (EC) should within one week of the President’s “directive” issue a notice of his intention to hold an election for the NPC. The notice should specify the following:
The period during which nomination papers shall be received by the returning officer of each administrative district in the province (the “nomination period”). The normal office hours at the office of the returning officer. The number of candidates required to be set out in the nomination paper.4
The nomination period will start on the fourteenth day after the date of publication of the EC’s notice and finish at twelve noon or the twenty-first day after the day of publication of said notice.
After the expiration of the nomination period the Returning Officer of each District may reject any nomination paper for the reasons set out in Section 17 of the Provincial Councils Elections Act.
After allocating approved symbols for recognised political parties and independent groups (According to Section 20) the Returning Officer of each district should publish a Gazette Notification specifying among other things:
The date of the Poll will be a date falling on a Saturday (which is not a Poya Day or any other specified public holiday) and a date not less than five weeks or more than eight weeks from the date of publication of the notice of the EC.
Accordingly, the Poll will be held within 9 weeks from the date the President issues a directive to the Elections Commissioner to hold an election for the NPC.
The Number of Seats for the NPC
The total number of seats for each Provincial Council is equal to the total number of members entitled to be returned from each administrative district within the province plus two bonus seats to be awarded in terms of Section 61 A of the Provincial Councils Elections Act. According to Section 3(3) of the Provincial
Councils Elections Act, the number of seats for each administrative district within the province will be determined by the Elections Commissioner on the basis of:
CPA was informed by officials that the total number of seats for the five   administrative districts in the Northern Province will be divided is as follows:
District – Jaffna 16, Mannar 05,  Vavuniya 06,  Mullaitivu 04,  Killinochchi 02,  Bonus
Seats 5
Total 38
Voters Lists and Related Issues
CPA was informed that the 2012 electoral list would be used for any election held within the course of this year (2013). The Northern Province consists of two  “Electoral Districts”. The Jaffna Electoral district includes both the Jaffna and Kilinochchi administrative districts whilst the Vanni Electoral district is comprised of the Mannar, Mullaitivu and Vavuniya administrative districts.
No. Registered voters Jaffna Electoral District Year 2008 –721,359 ; 2009 – 816,005 ;2010- 484,791
No. Registered voters Vanni Electoral District Year 2008 – 266,975 ;2009 – 270,707; 2010 –  236,449
(Source: http://www.slelections.gov.lk/ep.html)5
The number of registered voters in the Jaffna electoral district has reduced drastically.6 This is a result of the Department of Elections carrying out the annual revision of the electoral register and thereby removing those who no longer live in those areas, the deceased and those who have been registered twice. CPA was informed that the enumeration was done annually to ensure accuracy in numbers but consideration was given to special situations such as displaced communities. CPA notes that the Department of Elections needs to take steps to address the needs of those who continue to live in displacement.
Another group that requires attention are former combatants. During the Presidential Election in 2010 special arrangements were made for this category –
13 polling centres were established for them to vote. It is hoped that a similar arrangement will be made if NPC elections are held.
Identification Documents
Both the Government Agent for Jaffna and the Government Agent for Kilinochchi
stated that problems relating to identification documents have been solved, with most persons who had lost identification documents during the conflict being issued same. The Commissioner for Elections had previously recognised seven forms of documentation for voting. These documents are:

CPA requests that awareness raising is done by the Commissioner of Elections
and his department among individuals in the North as to the requirements for voting including the need to register and the necessary documentation. CPA also notes that the need for special identification documentation be recognised, in the event conventional documentation is unavailable among registered voters in the area.
Foot Notes
1 The CPA team also participated in a public demonstration held in Jaffna against the land acquisition process which had a wide representation of politicians, lawyers, civil society and affected communities.
2 Report of the Working Group on the Universal Periodic Review, “Addendum – Views on conclusions and/or recommendations, voluntary commitments and replies presented by the State under review: Sri Lanka”, 21 February 2013, para 2.7 available at http://www.ohchr.org/Documents/HRBodies/HRCouncil/RegularSession/Session22/A-HRC-22-16-Add1_en.pdf (accessed on 3 May 2013); Minister Samarasinghe, Statement at the High Level Segment of the 22nd Session of the United Nations Human Rights Council, 27 February 2013, available at http://www.island.lk/index.php?page_cat=article-details&page=articledetails&code_title=73616 (accessed on 3 May 2013).
3 Daily Mirror.lk, “President promises NPC elections in September”, 21 April 2013, available at http://www.dailymirror.lk/news/28374-president-promises-npc-elections-in-september.html
(accessed on 3 May 2013); Ceylon Today online, “NPC election in September – President”,23 April 2013, available at http://www.ceylontoday.lk/16-30420-news-detail-npc-election-inseptember-president.html (accessed on 3 May 2013).
4 Per S. 13 of the Provincial Council Elections Act, No 2 of 1988 each nomination paper shall have the names of candidate’s equivalent to the number of members to be elected from that administrative district, increased by three.
5Data for 2011 and 2012 were not publically available.
6 Between the year 2008 and 2010 the number of registered voters has reduced by 236,568.5
Taken from  the Field Report: Jaffna and Killinochchi Districts by CPA,  Download it as a PDF here, or read it online here.
Share
Facebook
Twitter
WhatsApp
Pinterest
Email