North Awakens to Adulthood Sans a Childhood it Never Had

(President Maithripala Sirisena participated in a pooja at Kailasapillayar kovil in Jaffna on Tuesday)
From the ruins of war the north is up and running, throwing caution to the winds of change the Parliamentary polls will decide.

That the mainstream parties are able to cobble together lists of candidates to contest this election shows that, amidst the dark side of postwar North, a more liberal generation with a wider view of the world is coming to the fore.

Dr R. Sivasegaran is one such candidate the Sunday Times interviewed. He has quit as a Medical Officer at the Health Ministry and is contesting for a seat in the National Parliament. (See interview box)

Despite what Dr. Somasunderam refers to as the “collective trauma” where whole communities have been uprooted from familiar and traditional ecological contexts and torn the social fabric, life has been limping back to some normalcy within the peninsula, since the conclusion of the northern insurgency. It’s been five years, the fields are being cultivated, but a shortage of construction workers is slowing down reconstruction efforts. Pockmarked buildings in private blocks are still visible in and around Jaffna, with either the owners having fled the area, or are unable to reconstruct. 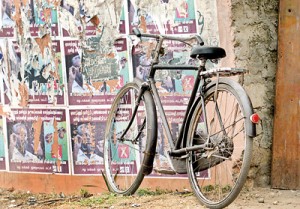 Ordinary folk such as S. Sivanesan, a teacher in a government school in Jaffna, says, “We will vote for candidates who are willing to speak on behalf of the Tamil people and their causes. They should be able to help people affected by the war and not able to resettle in their respective land. That’s our immediate need. It has to be done.”

Then there is Subramanuim Thangarasa, a 61-year-old businessman who says, “For a long time we have been voting for regional parties, but nothing has been achieved on the sectors of development. Many youth don’t have employment here, because no development has taken place. I will cast my vote for any national party which will develop the north.”

Election fever is not all that visible due to the general clampdown by the Election Commissioner on excesses committed by candidates during the campaign period. When we visited the office of the frontline UNP candidate Vijayakala Maheswaran in downtown Jaffna, she herself had gone for a meeting elsewhere, but we saw young girls busily preparing leaflets for mailing to prospective voters. 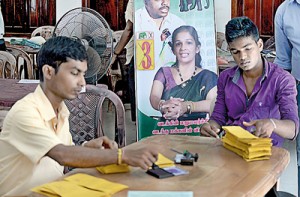 Former minister Douglas Devananda’s posters still remain on city walls, some tattered. One is not certain if they are from an earlier election; but observers believe he would win a seat in the district (See BOX). One of the outlets of the Palmyrah Board which was under him, had empty shelves – just a bottle of palmyrah jam and straw hats. The employees were Devananda appointees and the shutters were up early that afternoon when we returned. Either the employees were campaigning for their former boss, or just went home early because sales were non-existent. An exhibition by the Board, in a large estate on the outskirts of the city, displaying various products from the MPCSs (Multi Purpose Cooperative Societies) in the district, were as empty as the store in the city.

The Tamil National Alliance (TNA) remains the front runner to take the district, but some of its more visible candidates such as M.A. Sumanthiran who is contesting from Velvitithurai, is not generating mass support, mainly due to internecine party rivalry. The Tamil Diaspora is trying to have their say in this election by supporting hardline TNA candidates and ensure moderates like Sumanthiran are defeated.

In a bid ‘to keep the flock loyal to the church’, so to say, the TNA manifesto calls for Federalism, knowing only too well that it’s a bitter pill to swallow in the South. (See BOX). That is why the TNA is following the same policy it adopted at the January 8 Presidential election. They are not aligning themselves with any mainstream party, though it’s an open secret here in Jaffna, that it will throw its lot with the UNFGG (United National Front for Good Governance) should the latter require the numbers to form the next Government.

One of the fallouts from the TNA infighting is the emergence of two new groups directly challenging the TNA, through non-mainstream parties. One is the Crusaders for Democracy, a loose combination of ex-LTTE cadres, some of whom were frontline combatants. They are being led by A. Vidyatharan who was the former editor of the Jaffna-based Uthayan newspaper, and brother-in-law of E. Saranapavan, a TNA MP in the last Parliament, who is also a candidate. Saranapavan is the publisher of the Uthayan.

Uthayan editor, Thevanayagam Premananth had a chat with the Sunday Times at his office. “About 40,000 preferential votes would be the likely cutoff point for a candidate to be elected an MP from the Jaffna District, but that is if polling is very high. This figure could even rise to 50,000. Many candidates will not be able to muster this amount of preferential votes,” he said.

The Tamil Congress (TC), one of the oldest political parties in the North, formed by the late G.G. Ponnambalam, a famous criminal lawyer of his day and later Minister of Industries, is contesting separately. Their campaign is being spearheaded by the late Ponnambalam’s grandson Gajendra Kumar, whose father, the late Kumar Ponnambalam, was also a criminal lawyer and head of the TC. They have chosen to take a hardline posture in the campaign, gambling on the hope that they will garner the support of the radical elements in the district, by outdoing the TNA on the rhetoric.

By Chris Kamalendran and Lakshman Gunathilake with N. Parameswaran in Jaffna / ST