No Real Will to Account: Shortcomings in Sri Lanka’s National Plan of Action to implement the recommendations of the LLRC-Amnesty International 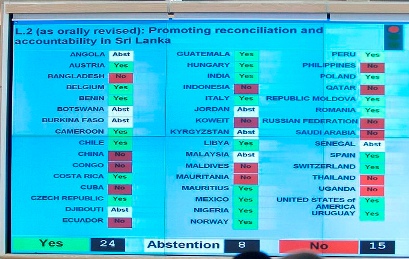 Written statement to the 21st session of the UN Human Rights Council (10-28 September 2012)
Sri Lanka’s failure to account for serious violations of human rights has created a climate of impunity where arbitrary detentions, torture and other ill-treatment, enforced disappearances, and custodial killings continue unchecked.
More than three years after the armed conflict with the Liberation Tigers of Tamil Eelam (LTTE) ended, these violations continue to be reported.
Authorities still rely on the Prevention of Terrorism Act (PTA) to detain hundreds of people suspected of LTTE links without charge or trial.
The PTA permits extended administrative detention, and reverses the burden of proof where torture or other ill-treatment of detainees is alleged. It restricts freedom of expression and association and has been used to suppress dissent. Amnesty International has documented these issues extensively.1

Resolution 19/2 adopted by the UN Human Rights Council (HRC) on 22 March 2012, was an important development in calling on Sri Lanka to account for serious violations of human rights – including war crimes. Sri Lanka was urged to formulate a “comprehensive action plan” for implementation of recommendations made by its Lessons Learnt and Reconciliation Commission (LLRC), and to “address alleged violations of international law.”2 The resolution noted with concern that the final report of the LLRC did “not adequately address serious allegations of violations of international law”3

In July 2012, the Sri Lankan government responded with a National Plan of Action (the Plan) which commits to limited implementation of 92 of the LLRC’s 285 recommendations. It outlines activities envisioned, responsible agencies, performance indicators and timeframes.4

However the Plan does not adequately address the need for accountability for serious violations of human rights, and it postpones critical reforms needed for reconciliation by referring them to a Parliamentary Select Committee on constitutional reform that does not yet exist.

Accountability activities in the Plan are described vaguely and do not correspond fully with the LLRC’s more precise recommendations for independent investigation and prosecution of human rights and humanitarian law violations. Proposed actions often refer to existing mechanisms or procedures that Amnesty International has documented as ineffective.5

The Plan’s greatest weakness is that it relies on agencies associated with violations to investigate and police themselves. Although soldiers, commanding officers and Defence Ministry officials have been accused of involvement in war crimes, the Ministry of Defence is charged with implementing the LLRC recommendation calling for investigation of wrongful deaths of civilians, and also for “allegations of abductions, enforced or involuntary disappearances, and arbitrary detention.”6 The Plan does not commit to new or independent investigations; instead it refers to an internal “disciplinary process,” supposedly ongoing under Sri Lanka’s Armed Forces statutes; it rejects the LLRC call for the appointment of a Special Commissioner of Investigation into alleged enforced disappearances.7

The LLRC called specifically for “an independent investigation into the Channel 4 Video to establish the truth or otherwise of the allegations arising from the video footage,”8 (namely that Sri Lankan government forces may have engaged in extrajudicial executions and sexual violence against captured LTTE cadres in the last days the armed conflict). The Plan states only that the Ministry of Defence will assess the army’s ongoing inquiry into the authenticity of the allegations and, “[b]ased on such results take follow up action as appropriate.” 9 The Plan also calls on the same Ministry to eliminate the operation of illegal armed groups, several of which are alleged to have worked for or alongside the security forces, 10 and the police are charged with ending attacks on media personnel, although they have been accused of attacks on journalists.

The Plan commits to prosecution under the Criminal Procedure Code “where relevant” but given the lack of independent investigation, action against those in senior command positions is unlikely.

Resolution 19/2 encouraged the Office of the UN High Commissioner for Human Rights (OHCHR) and relevant special procedures mandate holders “to provide, in consultation with and with the concurrence of the Government of Sri Lanka, advice and technical assistance on implementing the above-mentioned steps and requests the Office […] to present a report to 5 For example, paragraph 9.63 of the LLRC final report, (Report of the Commission of Inquiry on Lessons Learnt and Reconciliation, November 2011),calls for “a centralized comprehensive database containing a list of detainees, which should be made available to the next of kin with names, place as detention as well as record of transfers.” It also asks the authorities to publish a list of names of people in detention.

The Action Plan only calls for enhancement of the existing database (which contains only names of persons held by the Terrorist Investigation Division) and calls on the police to “continue current practice of informing next of kin regarding location of detainee.”

Amnesty International has documented problems with both processes; see Locked Away at note i. government to “ascertain more fully the circumstances under which specific instances of death or injury to civilians could have occurred, and if such investigations disclose wrongful conduct, prosecute and punish the wrongdoers”. But the Action Plan does not commit to new or independent investigations, limiting implementation to completion of an “ongoing disciplinary process.” 10

Paragraph 9.73 of the LLRC final report calls on the authorities to “conduct proper investigations in respect to allegations against the illegal armed groups. [and] institute criminal proceedings against offenders.” The Action Plan states only: “During the time of the conflict, illegal armed groups were known to operate in the theatre of conflict. Steps have been taken to completely eliminate this activity.

These measures will be continued to be implemented to ensure that these groups do not re-emerge.” the Council on the provision of such assistance at its twenty-second session.” 11 In August, Sri Lanka indicated its willingness to host a September visit by OHCHR experts to “offer advice and technical assistance” to the government towards implementing resolution 19/2. Amnesty International urges this team to pay particular attention to the independence of proposed implementing agencies. The resolution stresses the need for the “credible and independent”12 action; to that end the Ministry of Defence, armed forces and police should not be investigating alleged violations by their own personnel possibly acting on the orders of senior commanders and government ministers.

Sri Lanka’s Plan does not demonstrate new political will to account for alleged crimes under international law committed by its armed forces and the LTTE in the last stages of the armed conflict or indeed to investigate and prosecute other alleged serious violations of human rights.

The response of Sri Lanka to HRC resolution 19/2 on accountability has been to create process without substance.

UN member states must insist on evidence of concrete changes – not just plans and promises.

They must reemphasize the need for impartiality in all investigations of alleged crimes under international law. Without international pressure it is almost certain that the Government of Sri Lanka will not seriously investigate or prosecute such crimes. As Amnesty International has noted previously to this Council, failure to secure justice for survivors will be disastrous; threatening future generations and institutions that are critical to the protection of human rights in Sri Lanka and internationally.

To this end, the Human Rights Council and UN member states should call on Sri Lanka to:

Initiate prompt, effective and independent investigation of alleged violations of human rights or humanitarian law identified by the LLRC or otherwise. No amnesties should be considered or granted for perpetrators of such violations, regardless of their status or role in the government. Agencies associated with alleged violations should not be tasked with investigating their own personnel.

Release all individuals arrested under emergency or anti-terrorism laws, including all persons held in “rehabilitation camps”, unless they are charged with recognizable criminal offences and remanded in custody by an independent, regularly constituted civilian court. Any trials must be held promptly and in regularly constituted civilian courts with all internationally recognized safeguards provided and without recourse to the death penalty. Implement all court rulings (such as Supreme Court decisions in fundamental rights cases and writs of habeas corpus) ordering release of detainees without delay.

Further to HRC resolution 19/2, facilitate without delay the visit requested by the Working Group on Enforced or Involuntary Disappearances.

4 National Plan of Action to Implement the Recommendations of the LLRC, 26 July 2012, Official Website of the Government of Sri Lanka,

8 National Plan of Action to Implement the Recommendations of the LLRC at note iv above.