No One, in the US or Sri Lanka, Should Be Above the Law 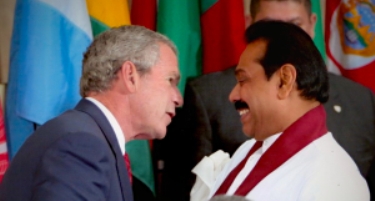 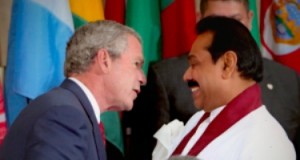 ”Whether committed by the US or Sri Lanka, by government officials or separatist groups, serious human rights abuses should be investigated and perpetrators held to account.”
by Brad Adams, Human Rights Watch

In a report released last month Human Rights Watch called on the US government to launch criminal investigations into allegations of detainee abuse authorized by senior Bush administration officials. The 107-page report, “Getting Away with Torture: The Bush Administration and Mistreatment of Detainees,” presents substantial information warranting criminal investigations of former President George W. Bush, Vice President Dick Cheney, Defense Secretary Donald Rumsfeld, and CIA Director George Tenet, for ordering practices such as “waterboarding,” the use of secret CIA prisons, and the transfer of detainees to countries where they were tortured. Such acts violated the Convention against Torture, the Geneva Conventions, and other international treaties binding on the United States.

President Barack Obama took a number of important steps to promote human rights when he took office, including banning the use of torture. But while the Obama administration has disavowed the Bush administration for the use of torture, it has not taken the necessary next step: investigating and prosecuting those responsible for planning and authorizing it.

The Obama administration’s only attempt to date to look at past abuses was a wholly insufficient inquiry led by US Attorney John Durham. It looked only at abuses by CIA interrogators that went beyond what government lawyers authorized. It did not investigate interrogation methods that Bush administration lawyers deemed lawful in the now notorious “torture memos,” even though the methods plainly amounted to torture and other illegal acts. Instead, it looked only into cases in which CIA interrogators went beyond what government lawyers authorized, and then only decided to pursue 2 of about 100 cases it reviewed. In an attempt to avoid the political fallout from a serious accountability process, the Obama administration hopes that the Durham inquiry will close the book on this sordid chapter of American history.

Human Rights Watch issued its report because it does not accept impunity for serious human rights violations, in the US or anywhere else. Victims, including the many who we now know committed no crimes but were nevertheless arbitrarily detained and mistreated by the Bush administration, deserve justice. And the American people deserve to see that the law is upheld regardless of the perpetrator.  The US government cannot ignore these offenses, which are grave crimes in violation of international law, for political or other reasons. For these reasons we continue to call on the US government to conduct criminal investigations, while asking other governments to do so if the US government does not.

We have long made the same points regarding Sri Lanka. In both countries senior government officials have been implicated in wrongdoing. Both have used the threat of terrorism to explain or try to justify the abuses. The Sri Lankan government has failed to open criminal investigations into a plethora of credible allegations of serious abuses during the final months of the war with the Tamil Tigers. The inadequate Durham inquiry is mirrored by the inadequate Lessons Learnt and Reconciliation Commission, which does not have the mandate, resources, or, apparently, the will to investigate war-time abuses by government forces.

But there are some differences as well. While the US government has not fulfilled its obligations under international law to investigate torture allegations, it has admitted that some violations took place, at least by rank-and-file soldiers. It does not claim that photos of torture and ill-treatment by US soldiers in Abu Ghraib prison in Iraq were fake or doctored. Those who call for investigations have not been labelled as traitors and subjected to threats, intimidation, or worse.

The Sri Lankan government maintains its shrill and increasingly unbelievable arguments about how it conducted the final months of the war with the Tamil Tigers. After the publication of the UN Panel of Experts report, the government’s insistence that its forces committed no war crimes and maintained a policy of zero civilian casualties is farcical.. There is ample evidence that the Sri Lankan military repeatedly shelled its self-created “no-fire zone,” killing thousands of civilians, and repeatedly struck clearly marked hospitals. And there is video and other evidence of government soldiers summarily executing people in their custody, including members of the Tamil Tiger leadership and their family members. Of the many unanswered questions are who gave the orders for such abuses and how far up the chain of command.

When the Rajapakse administration is confronted with photographic and video evidence of atrocities, its reflexive response has been to denounce the messenger. It attacked the UN special rapporteur, Philip Alston, when he validated a gruesome video of killings. It responded with even more venom to the execution video shown on Britain’s Channel 4, calling it fake despite expert conclusions to the contrary. Its recent report on the conduct of the war continues its policy of denial of abuses by government forces.

Many officials have claimed that governments and organizations are engaged in a huge conspiracy against the government. Figures such as the UN secretary-general, ambassadors, foreign politicians, human rights workers, journalists and Sri Lankan activists are supposed to have gotten together as either Tamil Tiger agents or dupes to besmirch the reputation of the Sri Lankan government. Human Rights Watch has been accused of such bias, ignoring our years of reporting on Tamil Tiger abuses, including numerous killings, extortion of the diaspora, the use of child soldiers, and treating civilians as human shields during the war’s final months. They are all on our website. The idea that such a diverse group of people, institutions and governments would be able or willing to engage in a massive conspiracy is beyond ridiculous.

Whether committed by the US or Sri Lanka, by government officials or separatist groups, serious human rights abuses should be investigated and perpetrators held to account. Until the US and the Sri Lankan governments do so, they will be violating the trust that their people have put in them. And, as we showed in our report about rights violations under the Bush administration, demands for accountability will not go away. Indeed, they will only get stronger.