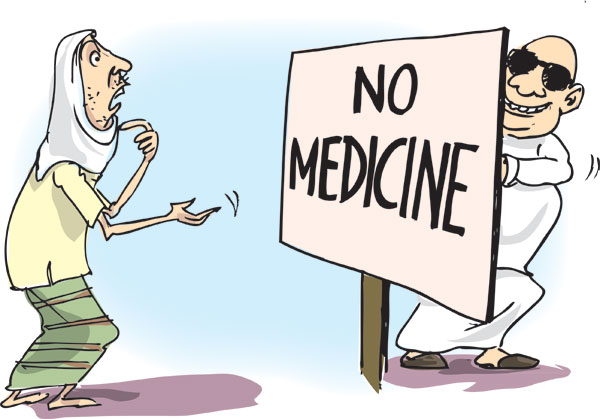 The State Pharmaceuticals Corporation (SPC), which supplies life- saving or essential drugs to public hospitals and medical clinics, was reported yesterday to have run out of funds to buy drugs because the Treasury had cut the Health Ministry’s budgetary allocation by Rs. five billion.
According to yesterday’s Daily Mirror front page story the cut in allocations and the lack of funds have resulted in a dangerous shortage of life- saving drugs at the Maharagama Cancer Hospital, the Sri Lanka National Hospital, the Teaching Hospitals in Peradeniya, Karapitiya, Jaffna and Anuradhapura and the General Hospitals in Kandy, Galle, Anuradhapura, Batticaloa, Kurunegala and several district and base hospitals.

A spokesman for the SPC said the total budgetary allocation for the import of medicinal drugs was Rs.21.4 billion but by yesterday the SPC had used Rs. 15.1 billion. The SPC’s bankers, the Bank of Ceylon and the People’s Bank had informed that they were unable to open any more letters of credit as the SPC had exceeded its loan limits because of the Rs. five billion cut by the Treasury. The recurrent and capital expenditure for the Health Ministry has been estimated at Rs. 93 billion and an official said the cut by the Treasury had affected the allocation for the SPC’s drug imports because the Ministry could not afford to cut any other recurrent expenditure like salaries for doctors and other staff.

It is shocking and shameful that the Rs. five billion cut by the Treasury has been imposed on a life or death area such as the import of life- saving drugs. In terms of the comprehensive National Medicinal Drugs Policy (NMDP)– which the cabinet approved as  far back as October 2005 but legislation for which has still not been introduced in Parliament– the SPC and the State Pharmaceutical Manufacturing Corporation (SPMC) were to be amalgamated. Incentives were to be given for the SPMC to manufacture hundreds of essential or life- saving drugs. Instead of doing this about 15,000 drugs—including some non-essential though highly expensive varieties under their brand names—have been registered for import and prescription. As a result Sri Lanka is wasting hundreds of millions of dollars in foreign exchange and today poor innocent people warded in public hospitals and even cancer victims at the Maharagama hospital are suffering grave consequences.

Recently Health Minister Maithripala Sirisena made the ridiculous statement that draft legislation for a National Medicinal Drugs Policy had disappeared. Was it another way of saying that a VIP does not want the NMDP because transnational drug corporations are giving huge amounts of funds to the ruling party?

This is a deadly situation and needs to be rectified immediately because it is only May and if we don’t have life saving drugs till December this year, hundreds might die and it would amount to second- degree murder.