No matter who we are we cannot disown our dead 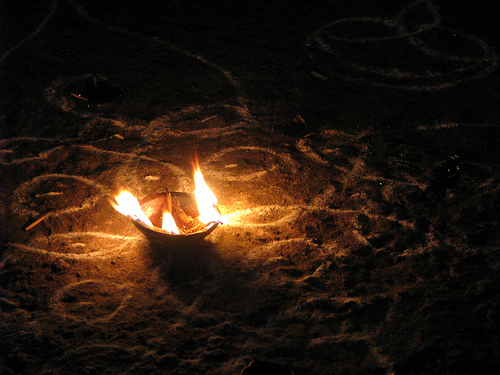 Karthiaai Vilakkeedu, Maaveerar Naal and the Lighting of Lamps in Jaffna
MA Sumanthiran M.P.
November 27, 2012 was a busy day for the Government of Sri Lanka. Government agents prohibited routine rituals in temples across the North and East, attacked and arrested peacefully assembled university students, invaded a female hostel, beat a newspaper editor, vandalized the vehicle of a Member of Parliament, abused political prisoners in captivity, injured a journalist and several University Media students, patrolled a cemetery, and found time to scout private properties so as to extinguish lamps lighted for the Hindu festival of lights Karthiaai Vilakkeedu.

What could spark such drastic measures? On November 27, 2012 all it took was a lamp.

This year the religious holiday Karthiaai Vilakkeedu and the Tamil remembrance day Maaveerar Naal both fell on November 27. Both occasions are traditionally commemorated by the lighting of lamps. The Karthiaai (Karthikai) lamps symbolize peace and harmony and mark the full-moon culmination of the Festival of Lights.

The Maaveerar Naal lamps pay homage to those Tamils who died in the War and symbolically mark the day of the first Tamil causality. Both annual activities are non-violent. This year both activities were forcibly or violently suppressed.

The Law of the Land

The Constitution enshrines the fundamental right of all Sri Lankans to the freedom of thought, conscience and religion (Article 10) and the freedom of speech, assembly, association, and movement specifically the “freedom, either by himself or in association with others, and either in public or in private, to manifest his religion or belief in worship, observance, practice or teaching (Article 14(1)(e)”. Thus, to ban an ancient Tamil Hindu tradition demands a higher standard than symbolophobia.

The Government attempt to legally justify their action on November 27 relies on a perverse hermeneutic. The Government relies on the provided restrictions on the fundamental rights of speech, peaceful assembly, and association described in Article 15, specifically that these rights can be restricted by law in the interests of racial and religious harmony. On its face, it is apparent that this restriction can not be used to limit a non-exclusive, non-violent and non-adversarial religious practice. One cannot protect religious harmony by inhibiting religion.

The fully realized right to peacefully exercise religion is religious harmony’s most basic sine qua non. In fact, Article 14(1)(e) which protects the right to manifest religion is not specifically subject to the restrictions as pertaining to law in the interests of racial and religious harmony. Instead this Article is subject per citation to the more general restrictions of Article 15(7) which include the priority “interests of national security, public order and the protection of public health or morality, or for the purpose of securing due recognition and respect for the rights and freedoms of others, or of meeting the just requirements of the general welfare of a democratic society.” Of these, the Government appeals to the broad interpretation of the general welfare clause to justify their actions.

The same Articles that vindicate the religious practice of lighting lamps also vindicate it as a cultural practice and the same aforementioned restrictions need not apply. Article 14(1)(e) guarantees each citizen “the freedom by himself or in association with others to enjoy and promote his own culture and to use his own language.” In similar fashion, racial harmony is impossible to achieve if people are prohibited on racial or ethnic grounds from commemorating the loss of their loved ones. Even so far as these fallen family were soldiers in a separatist movement, their enduring posthumous identity remains primarily ethnic and familial.

It is important to remember that the conflict itself was drawn along similar demographic lines. The cultural practice of honoring the dead by lighting lamps can not be legitimately described as a threat to national security and the Government must appeal to the same General Welfare Clause found in Article 15(7) to which Article 14(1)(e) regarding cultural expression is indeed subject.

The crux of the matter both legally and otherwise is whether the lighting of lamps in the tradition of these two holidays meet “the just requirements of the general welfare of a democratic society.” (Because Karthiaai Vilakkeedu was condemned soley by association to lamps, the real issue is as applied to Maaveerar Naal.)

This question can be answered theoretically and demonstrated practically. Absent the ‘Thought Police’ of an Orwellian dystopia, every person enjoys a de-facto right to remember what they want. An organic extension of that memory is the memorial. If a community or culture posses collective memories, it will be reflected in their desire to express these memories collectively. This expression can threaten those who are insecure about the past and the effect those memories might have on the future.

In the modern Sri Lankan context, certain memories are suppressed out of fear that these memories will rally people to a previously suppressed cause. The tragic irony is that the act of suppression removes the painful memory from the past and places it firmly in the present. We will never forget our past, but suppression insures that we will also never escape it.

The suppression of memories and memorials is similar to commanding someone not to think about a particular thing. The command and every reiteration of it generate the very thoughts the command seeks to preclude! Similarly every time the memories of past political realities are suppressed they are only displaced from the public to the private imagination where they can be neither checked nor measured only stirred.

Furthermore if violence is used as means of suppressing memories of violence, then not only does that memory get internalized, it gets updated. It is no longer confined to the past. In this manner whenever the Government uses violence inappropriately, as they did on November 27, 2012, they are replacing scars with fresh wounds.

The Government constructed a war memorial in Pudumattalaan in 2008. Its purported design is similar to Maaveerar Naal in that it seeks to commemorate fallen soldiers albeit through a more imposing and persistent method. The immense Government fixture features a soldier in uniform hoisting a gun in his right hand and the Sri Lankan flag in his left. As an enduring symbol of civil conflict, this image is troubling.

Open conflict may be over but the current battle for national identity cannot be won with a gun in one hand and flag in the other.

If Sri Lanka bought peace with violence only to sustain it with more violence then perhaps what Sri Lanka purchased wasn’t peace but a mere pit stop. The government is at a crossroads. If Sri Lanka is to realize something better than what we all remember the Government must take their finger off the trigger and leave their gun hand empty, open and outstretched.

No matter who we are we cannot disown our dead. We should not forget their mistakes, grievances, victories, defeats and sacrifices. Instead we should hope for ourselves what they hoped for us: that Sri Lanka will realize something better and brighter.