No doubt that the Sri Lankan forces did commit crimes; but when, and how much, is it ethical to kill in war? 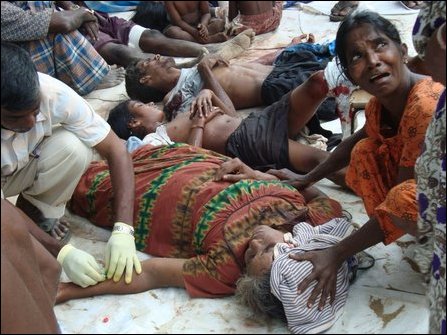 From Sri Lanka, questions about wars by Praveen Swami

The real question in the debate over India’s Sri Lanka policy isn’t whether it is pragmatic or ethical. It goes, instead, to the heart of the ethics of the wars our country fights, and will fight in years to come
Florence-on-the-Elbe, they used to call the historic German city of Dresden, before it began to turn to ash that evening in February 1945. Inside of days, the United Kingdom and the United States bomber command dropped some 3,900 tonnes of ordnance over the city, creating an inferno which would claim an estimated 25,000 lives.

The military utility of the slaughter is still debated by historians: proponents claim it destroyed key Nazi communication hubs, and broke the will of Germans to resist; opponents say it was vengeance, plain and simple.

“There is nothing intelligent to say about a massacre,” wrote Kurt Vonnegut, who watched the destruction of Dresden from a prisoner of war camp, in his classic Slaughterhouse Five.

Perhaps Prime Minister Manmohan Singh would agree: neither he, nor anyone else in the Indian government, has attempted to explain his controversial decision to stay away from the Commonwealth Heads of Government Meeting in Sri Lanka. That leaves supporters of the choice to contend it was driven by high principle, and opponents to claim low politics triumphed over pragmatic foreign policy.

It is time New Delhi thought of something intelligent to say on the issue, because it goes far deeper than India’s interests in Sri Lanka. Instead, the issue is enmeshed with how India fought the wars it believed were necessary to survive as a nation — and how it will fight the wars it is fighting today, and the ones yet to come.

Making sense of the killing that unfolded in Sri Lanka in the last days of the Eelam War isn’t easy: we don’t know how many lives it claimed or, indeed, whether a genocide took place at all. Estimates for civilian fatalities, produced by the United Nations and human rights groups, range all the way from 20,000 to 1,47,000. There is no expert consensus on whether civilians were targeted on purpose, and, if so, when. There are indeed several well-documented cases of extrajudicial executions, but these are not the same as a genocide.

It is important to understand why so many different numbers exist, what they mean, and what they imply.

The methodology behind these figures was first proposed by the University Teachers for Human Rights, a Jaffna-based human rights group. In essence, the UTHR proposed deducting the number of civilians who arrived at the government’s refugee camps from those known to be living in the so-called no-fire zone. This gave a number for people who could be presumed to have been killed.

However, no one knows how many people were actually living in the no-fire zone to start with. The government agent in Mullaithivu district, K. Parthipan, estimated the population to be around 330,000 in February 2009. Mr. Parthipan, though, had no way of conducting a census in the no-fire zone; he relied instead on reports from local headmen. He did not have any tools to distinguish civilians from LTTE conscripts and irregulars. He had no way of accounting for people who fled the zone to safety as the Sri Lankan forces closed in.

Mr. Parthipan’s numbers weren’t supported by the United Nations Panel of Expert’s analysis of satellite images, which suggested a population of 2,67,618. The U.N. experts then attempted a rule-of-thumb calculation of 1:2 or 1:3 civilian dead for every person known to be injured, which suggested 15,000 to 22,500 fatalities — much lower than the estimates that have now become commonplace. Finally, the panel plumped for an estimate of 40,000, based on Mr. Parthipan’s numbers.

Notably, the panel did not distinguish between civilians and the LTTE cadre — a fact noted by the U.S. State Department’s December 2009 report to Congress. The LTTE’s regular forces, estimated by experts at around 30,000, were backed by irregulars, the makkal padai, as well as press-ganged conscripts.

It isn’t unequivocally clear, either, that disproportionate or indiscriminate force was used to eliminate these forces. Satellite imaging shows that right up to May 17, the Sri Lankan Army was facing fire from the LTTE’s 130 mm, 140 mm and 152 mm artillery. The Sri Lankan Army claims to have been losing over 40 soldiers a day during the last phases of the war. The former U.S. Ambassador to Sri Lanka, Robert Blake, sent a confidential cable to Washington, DC, on January 26, 2009, saying that the Sri Lankan Army “has a generally good track record of taking care to minimise civilian casualties during its advances.”

Jacques de Maio, head of operations of the International Committee of the Red Cross, concurred: on July 9, 2009 he told a U.S. diplomat that Sri Lanka “actually could have won the military battle faster with higher civilian casualties, yet chose a slower approach which led to a greater number of Sri Lankan military deaths.”

It is worth noting, too, that the U.N. panel acknowledged that the LTTE put some of those civilians in harm’s way. The report found “patterns of conduct whereby the LTTE deliberately located or used mortar pieces or other light artillery, military vehicles, mortar pits, and trenches in proximity to civilian areas.”

D.B.S. Jeyaraj has graphically described how the LTTE forced civilians into the Karaichikkudiyiruppu area to defeat an offensive by the Sri Lankan Army’s 55 division and 59 division. Photographs taken by a cameraman for The Times of London on May 24, 2009, for example, show what appear to be pits for siting mortar, an arms trailer and a bunker, in the midst of a civilian location in the no-fire zone.

None of this, of course, settles things one way or the other — and that’s the point. There is very little doubt that the Sri Lankan forces did commit crimes. They worked with savage paramilitaries who were out to settle scores with the LTTE. It doesn’t follow from this, though, that Sri Lanka’s campaign against the LTTE was genocide. And this brings us to the larger question.

The language of war

The real question is a simple one: when, and how much, is it ethical to kill in war? Through the history of modern warfare, commanders have confronted the same dilemmas that Sri Lanka faced in 2009, or Winston Churchill confronted in 1945. Iraq, the University of Washington’s Amy Hagopian and 11 co-authors have estimated, lost 461,000 lives, either directly or indirectly, because of the U.S. invasion.

In April 2004, up to 800 civilians were reported killed when the U.S. tried to clear insurgents from the Iraqi city of Fallujah — a cost so high that embarrassed commanders were forced to call off the campaign. Iraq continues to see abnormally high rates of birth defects, which some researchers attribute to depleted-uranium munitions used.

The second battle of Grozny in 1999-2000, when Russian troops backed by armour and air-power battled Chechen insurgents, saw the city reduced to what the U.N. later called “the most destroyed city on earth”.

For decades, India has propagated the comforting fiction that its counter-insurgency and counter-terrorism operations are conducted within the framework of everyday criminal law. Leaders and lawmakers have, at once, countenanced extra-judicial executions, torture, and collective reprisals against civilians. This hypocrisy is corrosive to the armed forces, and to India’s polity.

This isn’t reason to countenance sanctimony. The laws of war, as we know them, were written in the wake of 1945 — driven by a particular historical experience of war. They continue to evolve mainly in Europe and the U.S., where nation-states have no lived experience in generations of the hideous consequences — and costs — of existence-threatening insurgencies.

In India, Sri Lanka, Afghanistan, Pakistan, though, there has been next to no first-principles discussion of the ethics and law. We have lost our ability to talk honestly about war, and what it entails — and that won’t do.

“The language of war is killing,” 9/11 bomber Khalid Sheikh Mohammad told his interrogators, perhaps unconsciously borrowing words from the great strategist, Carl von Clausewitz. He was right. How to speak it is something we must learn to honestly discuss. Sri Lanka is as good a place to begin as any.