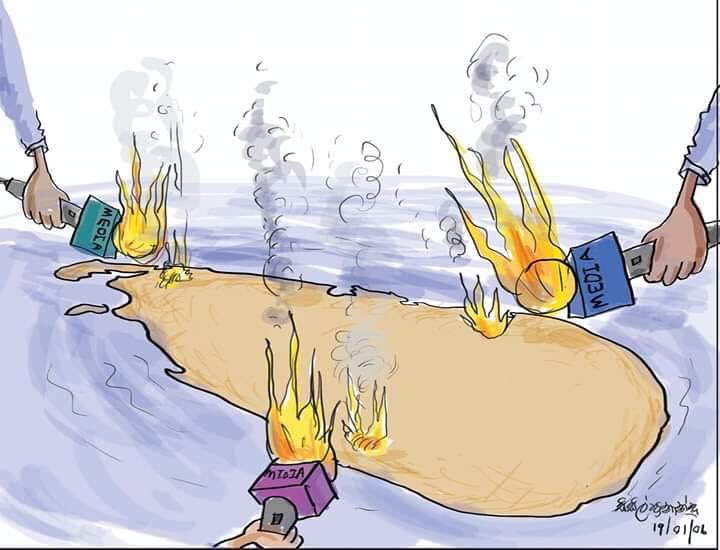 The media is busy reporting on what various individuals say about the draft Constitution, but don’t look at what draft itself says. The media is intent on reporting deliberately false and misleading news regarding the Constitution. There are many forces in the South that are hoping to prevent a new Constitution being passed, and the media that support such forces spread such false “news”.

“NewsFirst” is one of the worst offenders. They are here today. I hope they report this in full. A few days ago they used one phrase I used in a speech out of context, and falsely reported that I had stated that with the new Constitution, a separate state would be a possibility. That is completely false, and directly contradictory to what I said! One of the main things I said in that speech was that we should give up the Eelam dream.

The whole country knows about MTV. They have been continuously engaging is this dangerous and deliberate false reporting and the time has come to take them to task, and they will be taken to task. I want to tell them that directly today.

Today’s Ceylon Today headline is also an example of false reporting. The TNA asked that the Government consult with MPs of the area before taking cabinet decisions regarding those areas, and the Government agreed to do this. This is what the Hon. Mavai Senathiraja said. The news report states that he says there is an agreement between the TNA and Government and that no cabinet decisions can be taken without consulting with the TNA! I said that the Tamil areas in the East should also be included in this mechanism of consultation, but the news item says that I said there will be a North East merger!

(Speech made by Hon. Sumanthiran’s in Jaffna – TNA media office)