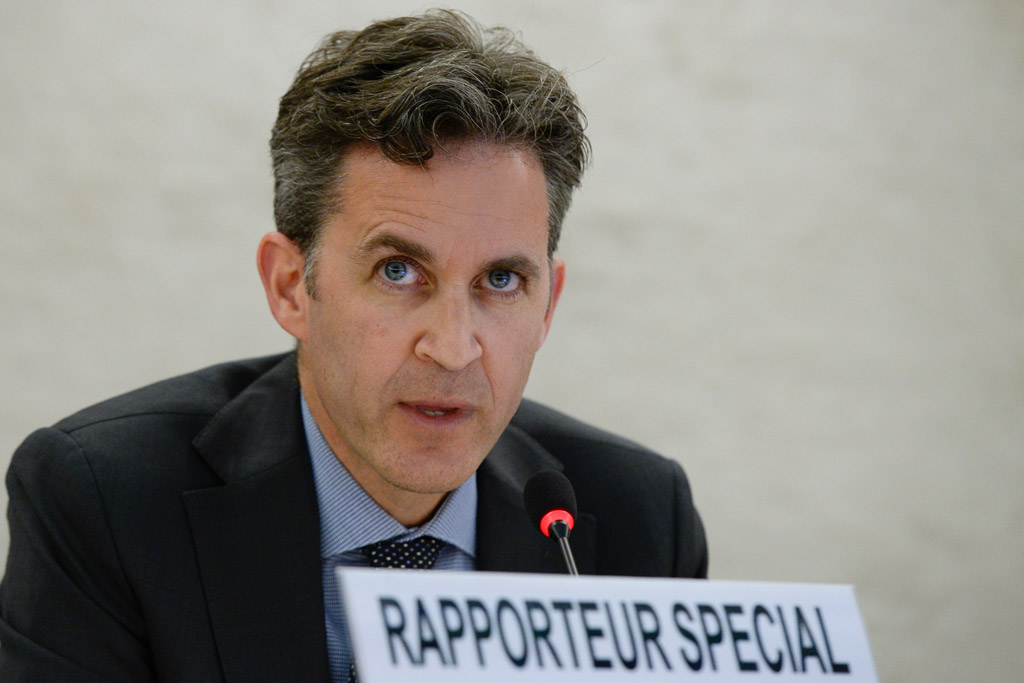 By Ashley Gorski.
UN Special Rapporteur on the promotion and protection of the right to freedom of opinion and expression, David Kaye, yesterday issued his fourth report, a comprehensive survey of global trends i n restrictions on freedom of expression. From Chinese cybersecurity legislation and the censorship of social media, to the detention of journalists covering the Black Lives Matter protests, Kaye’s 24-page study addresses an array of threats to this fundamental right, and it presents several recommendations for state action. As with his prior reports, this latest study shines a much-needed international spotlight on increasing threats to freedom of expression in a digital age.

Read the full report as a PDF:report-to-un-promotion-and-protection-of-the-right-to-freedom-of-opinion on line here

First, some quick background: Both the Universal Declaration of Human Rights and the International Covenant on Civil and Political Rights (“ICCPR”) – a treaty ratified by the United States and 167 other countries – guarantee the right to seek, receive, and impart information of all kinds. Under Article 19 of the ICCPR, any restriction of the right to freedom of expression must satisfy three conditions: it must be provided by law, have a “legitimate objective,” and be necessary and proportionate. Organized around this framework, Kaye’s report surveys government laws, prosecutions, activities by non-state actors, and other repressive measures around the world that violate these standards.

Although interferences with freedom of expression must be prescribed by law, Kaye identifies several key ways in which states fall short of this standard. For instance, laws intended to combat the threat of terrorism are often extremely vague, and therefore fail to meet the requirement that restrictions on freedom of expression be formulated with precision. Not only do vague laws fail to provide sufficient notice about what constitutes unlawful behavior, but they are frequently “so general as to permit officials excessive discretion to determine their meaning.” Examples include China’s recent draft cybersecurity legislation, which would require individuals to “observe public order and respect social morality,” and Kenya’s 2015 counterterrorism legislation, which criminalized “obscene, gory or offensive material which is likely to cause fear and alarm to the general public.” In addition, legislative processes often fail to consider state obligations under human rights law, and courts and other independent third-party reviewers routinely lack the necessary authority to evaluate rights violations.

Interestingly, Kaye describes the United States as a positive example of state efforts to satisfy the legality requirement – but he leaves no doubt that we still have a long way to go. He explains that the United States “has engaged in a public debate, including in Congress, that has begun to address, albeit in limited ways, the excessive discretion in intelligence and law enforcement in the context of digital surveillance.” Of course, much U.S. surveillance law remains secret, is unduly vague, vests excessive discretion in the executive branch, and fails to provide courts (or independent bodies such as the Privacy and Civil Liberties Oversight Board) with sufficient authority to remedy rights violations. Indeed, as underscored by the recent controversy surrounding the secret court order directing Yahoo to search all users’ incoming emails, it is plain that U.S. surveillance law is far too opaque to satisfy the ICCPR’s legality standard. (Even Congress is still seeking answers on the legal basis for and scope of Yahoo order.) Beyond that, there are a host of U.S. surveillance programs that have far-reaching implications for freedom of expression and that have never been publicly debated by Congress or reviewed by any court. In addition, surveillance authorities such as Section 702 of the Foreign Intelligence Surveillance Act and Executive Order 12,333 are drawn so broadly that executive branch employees wield tremendous discretion in conducting bulk surveillance and in choosing which targets to spy on. Without question, these authorities run afoul of the legality requirement.

Necessity to Protect a Legitimate Objective

The report also surveys restrictive measures that have legitimate objectives but are neither necessary nor proportionate, including certain forms of surveillance, forced decryption, internet shutdowns, and efforts to counter violent extremism. Under Article 19 of the ICCPR, “legitimate objectives” include restrictions necessary for the protection of national security or of public order.

In this section of the report, Kaye presents a powerful critique of states’ overreliance on invocations of “national security” and “public order” to attempt to justify their interference with freedom of expression. He rightly emphasizes that “national security” should be “limited in applications to situations in which the interest of the whole nation is at stake, which would thereby exclude restrictions in the sole interest of a Government, regime, or power group.”

Kaye also proposes a path forward: “[o]ne way to resist unjustifiable or arbitrary invocation of either [national security or public order] is to insist that Governments demonstrate the risk that specific expression poses to a definite interest in national security or public order, that the measure chosen complies with necessity and proportionality and is the least restrictive means to protect the interest, and that any restriction is subject to independent oversight.” (Emphasis added.)

This is a welcome gloss on the traditional human rights analysis, and Kaye should be applauded for his efforts to narrow these ever-expanding justifications for restrictions on freedom of expression. In future reports, I hope that Kaye will build on this approach to consider laws that are not intended to prohibit “expression” per se. For example, the U.S. government invokes national security (among other justifications) to conduct a wide range of bulk surveillance programs under Executive Order 12,333. This spying unquestionably interferes with freedom of expression, but the executive order does not expressly prohibit any particular expression. In those circumstances, what specific risk must the United States identify? How can we focus the international law inquiry to preclude generic appeals to national security?

In his discussion of states’ over-broad invocations of national security, Kaye also highlights the U.S. government’s attempt to compel Apple to unlock the iPhone of one of the individuals responsible for the San Bernardino shootings. In early March of this year, Kaye sent a letter to the federal judge presiding over the government’s motion in that case, outlining the relevant considerations under the ICCPR and attaching his earlier, excellent report on human rights and secure communications. Although Kaye’s letter explained that the court’s order “implicates the security, and thus the freedom of expression, of unknown but likely vast numbers of people,” it stopped short of concluding that the government’s request violated Article 19. In the report, however, Kaye takes the next step, characterizing the court’s order as disproportionate. This is a positive development, and I would like to see Kaye continue to engage directly with courts in response to government attempts to require companies to compromise the security of their devices.

The report also surveys measures taken by state and non-state actors that lack a legitimate objective under Article 19. Kaye identifies several trends, including the criminalization of criticism, which often targets political and human rights activists; restrictions on expression relating to religion and belief, especially by non-state actors such as ISIL; and the singling out of expression by members of certain groups, such as LGBT individuals, women, and artists. Critically, Kaye also devotes significant attention to the assault on reporting, in which “[t]he tools used to criminalize criticism are also applied against those who practice journalism.” His report discusses the detention of journalists in Ethiopia, Iran, and Egypt, as well as the detention of reporters covering the 2014 Black Lives Matter protests in Ferguson, Missouri.

Kaye concludes by encouraging states to be “particularly mindful of the context of digital rights,” and to avoid adopting legal rules that undermine the freedom of expression of digital actors. The report also urges states to review and, where necessary, revise national laws; engage with special procedures of the Human Rights Council; support or establish regional or sub-regional monitoring; and to support independent media and civic space.

Kaye’s final recommendation is grounded in a trenchant analysis of state leadership. He finds that “many States with strong histories of support for freedom of expression – in law and in their societies – have considered measures liable to abuse in their own countries or to misuse when applied elsewhere.” Accordingly, he urges governments to reconsider new policies intended to enhance surveillance or to limit internet security, as they often fail to meet the tests of necessity and proportionality. The United States is a case-in-point, with its long history of championing freedom of expression. Although the United States largely refrains from the most egregious assaults on freedom of expression, it plainly falls short of its obligations under the ICCPR in several respects. Not only are its laws liable to abuse at home, but they help set the benchmarks for laws and practices elsewhere.

In a future report, I hope that Kaye will have the opportunity to address one issue in greater detail: secret state exchanges of data derived from mass surveillance programs. The international agreements governing this information-sharing are largely hidden from the public, but it is clear that these data swaps can have profound consequences for those subject to surveillance. States must not be permitted to circumvent domestic and international law by contracting out their spying. Because information-sharing itself infringes on the right to free expression, it should be prescribed by public law, necessary to achieve a legitimate aim, and proportionate.