UN releases most detailed account yet of alleged war crimes in Sri Lanka, putting burden on government to prosecute. 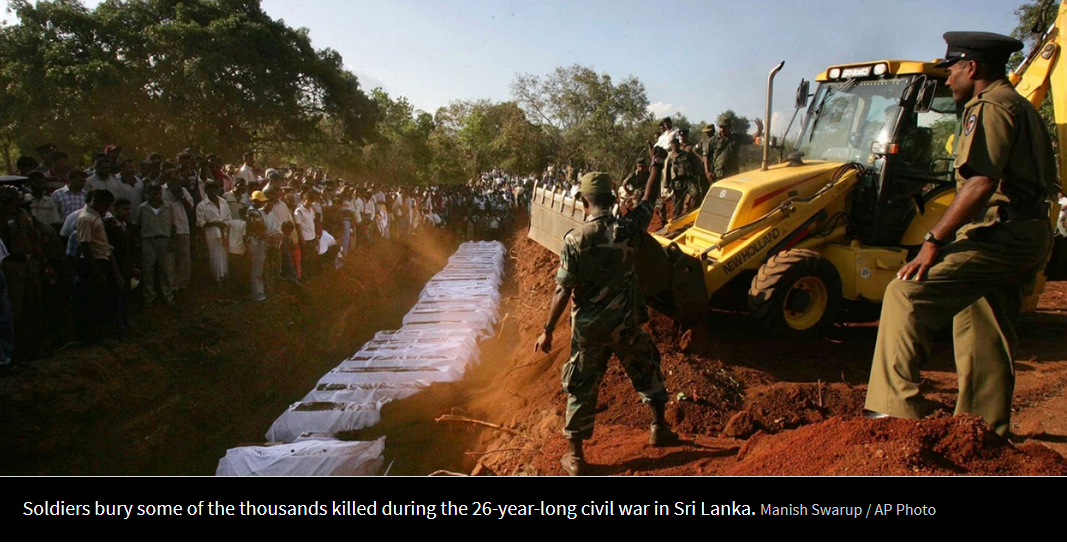 The Liberation Tigers of Tamil Eelam (LTTE), the Tamil separatist group that for 26 years waged armed insurgency against the government of Sri Lanka, always said that it would never surrender. It was part of their mystique — a promise that they would fight to the death.

And yet, according to a United Nations investigation released Wednesday, top leaders of the LTTE did surrender days before the official end of the war on May 18, 2009. At least, they tried to. The report is the most comprehensive account to date of alleged war crimes during the last phase of the civil war. It describes how the LTTE’s senior leadership, including the head of its peace secretariat, Seevaratnam Puleedevan, and the head of its political wing, Balasingham Nadesan, gathered in the village of Vellimullivaikkal in northern Sri Lanka, some of them with their families, and began sending messages through local and international intermediaries to the Sri Lankan government, including the former president, Mahinda Rajapaksa, saying they were ready to surrender.

The Red Cross and representatives of foreign governments offered to serve as observers to the surrender, but Sri Lankan authorities refused, according the report. Instead, they told the LTTE leaders to surrender to Army troops positioned nearby. According to several witnesses interviewed by U.N. investigators, they did as instructed, walking toward the front line in civilian clothes, unarmed, carrying a white cloth tied to a stick. But on May 18, 2009, the Sri Lankan Army announced that Nadesan and Puleedevan, among others, were killed in fighting by the 58th Division. The UN investigation concludes “that there are reasonable grounds to believe that LTTE senior political wing leaders Balasingham Nadesan and Seevaratnam Puleedevan as well as Nadesan’s wife Vineetha Nadesan may have been executed by the security forces.”

The so-called “white flag incident” is one of several notorious allegations of war crimes — including the extrajudicial killing of the 12-year-old son of the LTTE’s leader and the shelling of civilians at a hospital inside a no-fire zone — described in the report. Investigators stopped short of naming names of those who might be held responsible for the incidents, arguing that the U.N. wanted to present “a human rights investigation, not a criminal investigation.”

That job is now left to the new Sri Lankan government, which has vowed to hold those accused of war crimes accountable. Their plan to prosecute these cases through a domestic body, rather than through an international human rights court, is a departure from the widely criticized war crimes prosecutions in Rwanda, Sierra Leone and elsewhere. It could serve as a model for other post-conflict societies. “If handled well, the case of Sri Lanka has the potential to constitute an example for both the region and the world of how a sustainable peace ought to be achieved,” says Pablo de Greiff, the United Nations Special Rapporteur on Transitional Justice.

The biggest challenges are internal. Some of the people who were in command during the war are still serving in the army and are considered war heroes. Maj. Gen. Shavendra Silva, for example, who was in command of the 58th Division, is a serving general and was previously part of the Sri Lankan mission to the United Nations in New York. But there is intense pressure on the Sri Lankan government, internally and externally, to show some progress in prosecuting war crimes, more than six years after the end of the war. “Without going through the pain of analyzing our past actions we can not hope to have a better future,” says Sandaya Ekenaligoda, the wife of Pradeep Ekenaligoda, one of several journalists who went missing in recent years after criticizing the Rajapaksa government. “We need a government that will make those hard choices.”

So far, the new government under President Maithripala Sirisena seems willing to do that. Having defeated Rajapaksa in presidential elections in January, and then effectively shut Rajapaksa out of his own party, Sirisena formed a broad-based alliance with his traditional political rival and with key minority parties after parliamentary elections last month. The goal of this “national unity” government is to move the country toward reconciliation, and it made a significant step toward that goal with the announcement on Monday of a new, South Africa-style truth and reconciliation commission, something that human rights advocates have been calling for since 2009, but Rajapaksa had dismissed. “The new government has shown a willingness that it is ready to take action that former administrations shied away from,” says Jehan Perera, Executive Director of Sri Lanka’s National Peace Council.

But the U.N. report’s call for a “hybrid special court,” including judges, prosecutors and investigators from outside Sri Lanka, is likely to be a sensitive issue.

The U.N. human rights chief Zeid Ra’ad Al Hussein argues that only an international panel will be truly independent. “A purely domestic court procedure will have no chance of overcoming widespread and justifiable suspicions fueled by decades of violations, malpractice and broken promises,” he said in a statement. Many Sri Lankan and global human rights groups also support international involvement.

There is strong sentiment in Sri Lanka against that idea, particularly among those who have used the specter of “foreign interference” to argue against any U.N.-sanctioned war crimes panel. Namal Rajapaksa, the former president’s son and a member of parliament, called the idea of a hybird court “a complete insult to the entire legal system in this country,” signaling that allies of the ex-strongman would likely use any international presence to play on nationalist sympathies.

The government of Sri Lanka has already proposed a domestic mechanism, and U.S. officials have publicly expressed support for it. The U.S. will sponsor a resolution in the Human Rights Council based on Wednesday’s report, and observers are watching closely to see whether all of the report’s recommendations are included. “There could be lot of dilution by the time when it comes up into the resolution,” says Ruki Fernando, a Sri Lankan human rights activist. “It is what the council votes on that will be important.”
by Jyoti Thottam @jyotithottam & Amantha Perera @AmanthaP
aljazeera