Neo-fascism on the rise in Sri Lanka 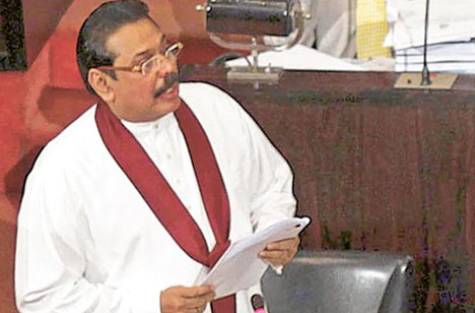 If Buddhist extremism is left unchecked, the existing peaceful ties between the island’s Sinhalese and Muslims could only lead to violence and an ethnic war

In speeches charged with provocative rhetoric, the group’s party leaders demanded that President Mahinda Rajapaksa ensures the protection of the ‘sacred Sinhala franchise’ that swept him into power. Extremist monks denounced Muslim practices, such as their use of conservative clothing referring to it as ‘gorilla’ outfits, and have called for a total ban on halal products for the community. Clad in white or t-shirts bearing a ‘No-Halal’ slogan, the supporters carried Buddhist flags and cheered enthusiastically when extremist Bodu Bala Sena monks denounced particular Muslim practices.

The word ‘halal’ means permitted or lawful. Halal foods are foods that are allowed under Islamic dietary guidelines. According to these guidelines extracted from the Quran, Muslim followers cannot consume certain foods that include pork, animals that were dead prior to slaughtering, carnivorous animals and birds of prey. The rulings also include animals not slaughtered properly or humanely.

Whipping the mob into frenzy during the demonstration in the capital, the mob leaders exhorted the crowds to become a vigilante Sinhalese self-appointed civilian police force against Muslim practices and businesses.“From today onwards, each of you must become an unofficial civilian police force against Muslim mannerism. These so-called democrats are destroying the Sinhala race,” Gnanasara Thero, one of the mob leaders exhorted at the frenzied crowds. He also vented anger against evangelical Christians who, he claimed, were attempting to perpetuate Christian extremism in the country.

Another leading Bodu Bala Sena monk said that pluralistic values had robbed the Sinhala people of money, jobs and enterprise. “This is a Sinhala country; there is a global principle that minorities must reside in a country in a manner that does not threaten the majority race and its identity.”

Issuing a direct challenge to the government, the Bodu Bala Sena general secretary said the organisation would give the administration until March 31 to ban the halal certification.

“Don’t make us take the law into our own hands,” the monk announced in his ultimatum, pledging to commence a relentless anti-halal campaign until the government announced the ban halal products by March 31.

The Buddhist extremist group has been leading the charge on virulent anti-Muslim sentiment spreading in Sri Lanka that has led to several incidents against members of the Muslim community in recent weeks. Last week, Muslim shop owners in Narammala in the Kurunegala district received letters threatening them with death if they fail to vacate their places of business by March 31.

In January at another rally, orchestrated demonstrations against ‘halal’ labelled foods, Muslim owned businesses and Muslim places of worship were targeted by organised groups of Buddhist militants in the northwestern province of Wayamba.

Those protesters were more ominous in their intentions. Taunting and cheering, they carried highly provocative effigies. The demonstrators who went in procession with these offensive placards and effigy attempted to taunt and provoke the Muslims of the town. The police would not take action against such highly provocative taunts, assuming that it was sanctioned by high levels of the government.

If left unchecked, the actions of such fringe group of fanatics trying to inflame the existing peaceful relations between the island’s Sinhalese and Muslim population could only lead to violence. Although the Muslims in the north watched, muted and restrained, it is only a matter of time before these fanatic radicals go berserk with their pent up resentment and hatred towards Muslims, and lead the island into an ethnic war.

While the majority of Sinhalese Buddhists is indeed peace-loving and has been living in harmony with other minorities over the centuries, the plague of militant Buddhists in recent days is gaining a strong foothold throughout the country. These are dangerous times. History so often tells us of how the good conscience of a silent majority has been swept away by the vicious rhetoric and actions of a militant minority.

In sharing a common religion with the island’s minority Muslims, Gulf Cooperation Council countries have a vested interest in ensuring their safety and security. The persecutions that have begun to form against them can in no certain terms be tolerated. The benign tolerance exhibited by the Sri Lankan government towards these militant groups must be viewed with alarm.

Sri Lanka is a recipient of a sizable mass of its national budget from the remittances of its workers in GCC countries. The GCC also provides most of the island’s energy needs. Many in the Gulf have been frequent visitors for tourism and business. So far relations have been harmonious.

But Gulf leaders must get the message across to the Sri Lankan government: The island must not embark on the perilous road of violent racial and ethnic divisions that could lead to unrestrained violence against not only the Muslims, but the other minorities on the island as well. Failure to heed that message must be compensated by strong action.

This is not an issue of sovereignty, but one of humanity.

Tariq A. Al Maeena is a Saudi socio-political commentator. He lives in Jeddah, Saudi Arabia.