Near site of LTTE’s last stand, a victory memorial that Tamils don’t visit 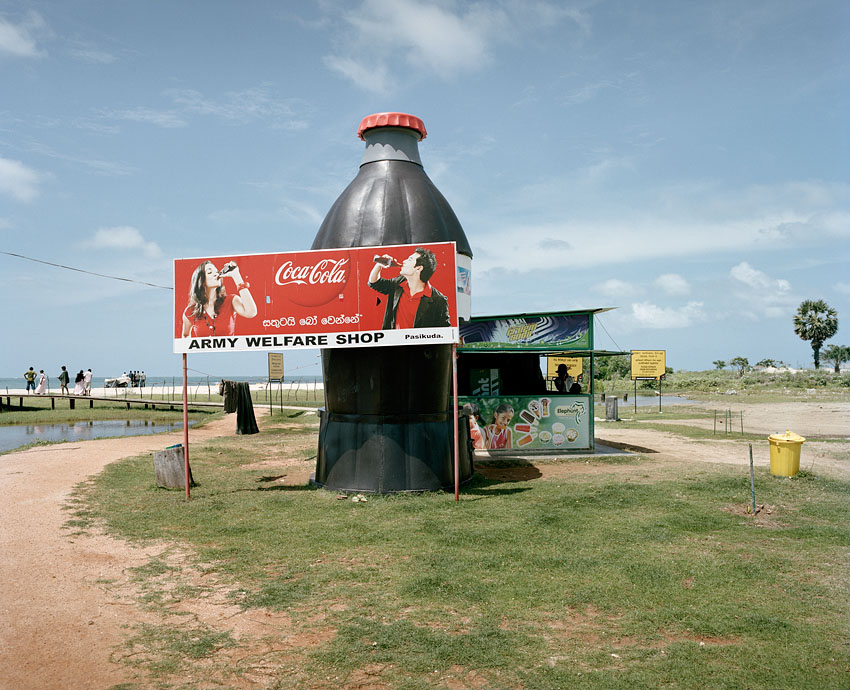 On a sandy patch of land that saw the most fighting in the final stages of the war in 2009, a victory memorial has come up: rising from a base of large granite rocks, a jubilant soldier, in one hand holding a gun with a pigeon hovering over it, in the other hand the Sri Lankan national flag.

A sculpted stone lion, Sri Lanka’s national animal, stands at each corner of the square base. In what was once Tamil Tiger territory, the symbolism is hard to miss.

Busloads of Sinhalese tourists from southern Sri Lanka are streaming to the memorial, and to the ‘war museum’ located next to it, where an assortment of LTTE artillery, guns and Sea Tiger suicide boats are on display.

Also on the war tourism circuit: an LTTE prison; a bunker four storeys deep, said to have been used by LTTE leader Prabakaran; and a swimming pool in which Sea Tigers practised diving. Visitors also stop at one-exhibit open air sites displaying an armoured vehicle here, a submarine there, and Farah, a Jordanian ship that was seized by the LTTE in 2006.

Smartly turned out military police direct visitors to the sites from the Puthukudiyiruppu junction.

About 4.5 km from the junction, on the road to Mullaithivu, a small board announces the War Museum. A soldier guides visitors around the exhibits, loudly reciting the story behind each in Sinhalese.

Some of the exhibits are displayed in a shed, some in a room, others in the open: one-man suicide boats, the size of big toys, one with shark’s teeth painted around the front; an array of artillery guns, shells, rocket launchers, mortars, machine guns, assault rifles, grenades, anti-aircraft guns. Out under the sun are the Sea Tigers’ bigger boats.

“Daily we get 500-700 visitors. At weekends, maybe even 2,000,” said a soldier running the army kiosks that sell snacks and soft drinks to tourists. Some of the visitors may have lost a soldier family member during the war.

At the LTTE leader’s bunker complex, visitors brave the overpowering smell of bats to climb down the four levels to see for themselves Prabakaran’s elaborately designed hideout in a jungle clearing.

“We are very proud of our army, that’s why we have come here,” said Dayani, a college student from Kurunegala (a little under 250 km from here), as her family walked around a LTTE-designed submarine.

Predictably, few Tamils hit this trail. On the stretch of the road from the war memorial up to Mullaitivu, even so long after the war’s end, strewn around are the personal belongings of a fleeing people, a distressing jumble of clothes, pots, pans, plastic buckets and mugs.

Our Tamil companion on the journey — he cannot be named — said the “museums” were like a finger in the eye of Tamils, and that he had never been able to bring himself to visit Prabakaran’s bunker before this.

He was not a supporter of the LTTE, he said; his family had suffered at its hands, forced to pay up large amounts to have his father released from its jail. “But it is a reminder that for all the sacrifices that Tamils had to make, we are nowhere today.”

There is no memorial to the civilians who perished in the war. The Sri Lankan government has resisted accepting that a large number of Tamil non-combatants were killed in the intense fighting in those final days.

Tamil leaders criticisethe museum as an “uncivilised” act by the government. Mavai Senathirajah of the Tamil National Alliance, the main Tamil political grouping, said it would not aid in reconciliation in any way.

“Every family in the north has lost at least a few of their near and dear ones. They have no space to grieve,” he said.

Moreover, the victory memorial is a reminder of the continued presence of the entirely Sinhalese Army across Northern Sri Lanka, including in the Jaffna peninsula, which remains a source of resentment for its predominantly war-fatigued Tamil people. Of the 19 divisions in the Sri Army, 14 are based in the Northern Province.

Every Tamil has the same concern: army camps in the North will be converted into cantonments, soldiers will bring their families, and Tamil areas will become Sinhalised.

In the Jaffna peninsula, soldiers are not as visible as they are in Puthukudiyiruppu, Mullaitivu or on the A 9 highway that leads to southern Sri Lanka. But their presence in the peninsula is underlined by the thousands of Tamil families who were displaced in 1990 to make way for a High Security Zone (HSZ) around the Palaly airfield.

These people remain in refugee camps, hoping to return to their lands one day. They are angry that soldiers now grow vegetables on these lands while they are forced to live under tin-sheets.

Maj. Gen. Mahinda Hathurusinghe, Jaffna security forces commander, said the army would keep some of the lands in the HSZ for expansion of the airport and building accommodation for soldiers, and return the rest to the rightful owners. The HSZ, he said, had already been reduced significantly.

“The Chinese are building accommodation. This will be ready in December [2012] or January [2013]. After this, we will hand over most of the houses in Jaffna,” he said.

The TNA has urged China to stop such constructions.

Already on the refurbished and carpeted A 9, the main highway from Jaffna to Vavuniya, Buddhist temples have come up. Shops and restaurants run by Sinhalese dot the road, especially near the army camps.

The Sri Lankan government says there were always Sinhalese and Muslims in the Tamil areas, and no area can be the exclusive preserve of any one community.

Sri Lanka’s Foreign Minister G.L. Peiris told The Hindu: “This talk of demographic composition of societies being changed — it is not one community that has been affected. Sinhalese have been very much affected because [they] were driven out of those areas. And so have the Muslims. So when one talks about dispossession of lands, driven out of areas where generations have been living, one must remember this is not something exclusive to one community.”
The Hindu