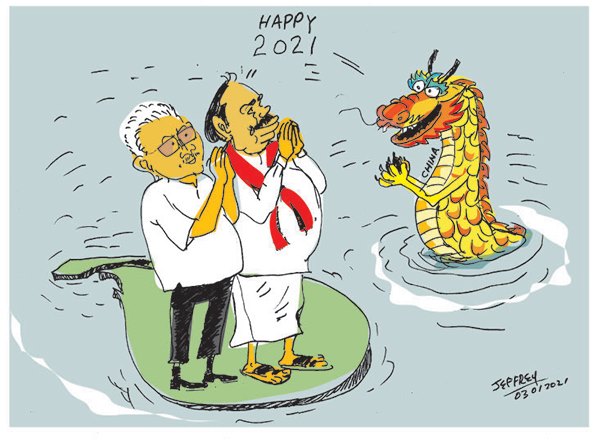 The Island cartoon yesterday by Jeffrey Kelaart stuck more than a nail in my heart.

The Ceylon Chamber of Commerce now offers its members the opportunity to purchase AstraZeneca Covid vaccines for Rs, 5,000 each. This is the alarm that most of those, like me, have obtained the first dose of its many weeks, and nearly two months ago, face today.

Are we moving to a huge fraud – a Vaccine Black Market – as the country suffers the swelling spread of the Covid pandemic?

Meanwhile, the GMOA, which has been largely silent on the questionable actions of the government and official health authorities on the Covid issues, has also called for a National Vaccine Strategy in the current crisis. Timely no doubt. An action that should have been thought of by the government, at least when the second wave of the pandemic began last year. What we see today is not any Vaccine Strategy, but a vastly growing Vaccine Fraud – in keeping with the political dominance of the Raja Vasala.

This Vaccine Fraud is the stuff of husbands of Health Power, Ministers of Official Communication, and performers on the political stages of this government. This Vaccine Fraud or Ennath Vanchava will soon dominate the social structure of the country, giving a new meaning to the Saubhagyaye Dekma that is guiding the entire structure of governance today.

With the Colombo Port City Act adopted by a simple majority in parliament, after many items contrary and threatening to the Constitution being suitably altered, thanks to the Supreme Court, we are now in process unveiling the actual politico-economic strategies of this government. A two-day debate for such an important piece of legislation, giving just two days – from the seven days allowed under the law – to file objections in the Supreme Court, and the absence of any wide public discussion and debate on it, shows the government’s overall contempt for democracy.

Far away in Beijing, there must have been a Chinese celebration on the passage of this Act, with plenty of fire-crackers and loud cheers from key members of the Chinese Communist Party. We may soon learn that the Chinese Communisty Party would also donate another 500,000 of a Chinese vaccination to Sri Lanka. Sri Lankans will have to keep a watch as to when the Chinese flags are fully raised over the Colombo Port City, and the Chinese language dominates the name boards, signboards and street signs of this place.

The stuff in the draft law on the Colombo Port City gives the impression it may not have been drafted in Sri Lanka. How could the Attorney General’s Department and/or the Legal Draftsman’s Department have brought in more than Twenty-five violations or clear departures of the Constitution of Sri Lanka? Did the learned in law in the government and the Cabinet of Ministers not know of these huge, and dangerous departures from the Constitution?

Would the learned lawyer and President’s Counsel, Ali Sabry, the Minister of Justice, have missed so many violations of our constitutional process? Or was it silence, to make way for the anti-constitutional thinking of the power that manipulates government policy today – the fingertips of Saubhagyaye Dekma?

We head Professor of Law, Minister G.L. Peiris, who is Minister of Education, tell parliament that this Bill could be passed with a simple majority. He was certainly trying to educate MPs, but how come he glossed over the multiple violations of the Constitution that the original Bill carried?

To get back to the Vaccine Fraud or Ennath Vanchava that we see developing within the government, the Port City Act adopted with such speed and lack of public discussion has all the promise of a huge and disastrous Governmental Fraud – an Aandukrama Vanchava – which moves far away from the democratic principles and processes this country has tried to maintain, with much failures and difficulties since independence in 1948.

The violations of the democratic process we have seen under Sirimavo Bandaranaike, and much worse under J. R. Jayewardene, are now taken to a situation of disaster. Let’s not forget that the Pro-Chinese Port City Law is a complete departure from democracy, launched by the 20th Amendment to the Constitution.

This is a huge fraud in the governmental process, paving the way for a Beijing dominated, Sino-Lankan governance, where Sri Lankan will do much more for China than the Belt and Road Project. It may not be very far when we sing ‘Namo, Namo Cheena”, when we should be singing Namo, Namo, Matha.