Mystery Death Of Sole Suspect In Lasantha’s Murder -A Sudden Death in custody or another extra judicial killing? 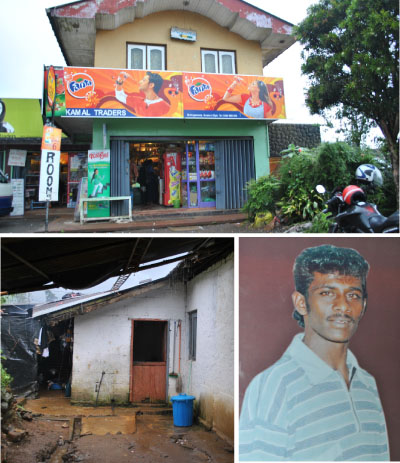 Nirmala Kannangara in Nuwara Eliya Pictures by Asoka Fernando
The sudden demise of 40 year old Pitchai Jesudasan, the main suspect in The Sunday Leader Editor-in-Chief Lasantha Wickrematunge murder case has raised many questions. Jesudasan was arrested by the Terrorist Investigation Department (TID) on February 26, 2010 at his residence No. 31, Magastota Estate, Ruwan Eliya, Nuwara Eliya for the alleged involvement in terrorist activities.

Jesudasan has been later sent to Boossa Camp after interrogation at the Secretariat Building, Colombo 1. He had then been transferred to Welikada Magazine Prison and was an inmate there till his death on Saturday October 15.

According to the B Report submitted by the TID dated March 30, 2010, P. Jesudasan of 31, Magastota Estate, Nuwara Eliya and Kandegedara Piyawansa of 42/ 28 Katuwana, Nuwara Eliya were arrested for the murder of Lasantha Wickrematunge and attempted murder of the then Editor of the Rivira newspaper Upali Tennakoon and previous attack on Deputy Editor for the Nation newspaper Keith Noyahr.

With relation to the murder of Wickrematunge police charged that Jesudasan’s national ID had been used by Kandegedera Piyawansa to obtain five SIM cards which were later believed to have been used by a five man hit squad who trailed and murdered Wickrematunge on January 8, 2009.  However, Jesudason as far back as August 23, 2008, had reported the loss of his National ID to S.M.P.S. Samarakoon, Grama Sevaka Ruwan Eliya.

The detention order, Jesudasan’s official complaint to the Grama Sevaka reporting his lost NIC in 2008 and A copy of the ‘B’ report charging Jesudason for the murder of Lasantha Wickrematunge

The report had further charged the two suspects of attempting to topple a legitimate government and bring discredit to the government.

However given the sudden and unexpected demise of Jesudasan, his family in Nuwara Eliya is seeking justice to find out what had happened to him as he was in the best of health when seen last.

“We went to the Magazine prison on August 11 to see him and he was in perfect health. According to the General Hospital my brother had died of a blood clot in the brain. This is hard to believe as he was a healthy person,” his elder brother Albert told The Sunday Leader.

Lourthusamy, the younger brother meanwhile queries as to why the prison guards failed to tell him that his brother had been sent to the General Hospital for treatment when he and his younger sister Mary visited the Magazine prison on Saturday, October 15.

“It was with the greatest difficulty that we always collected money to visit our brother as it cost us at least Rs.3,500 for our journey. When we went to the Magazine prison on Saturday October 15 to see our brother we were told that he was admitted to the prison hospital (PH). We then went to the PH and after about two hours we were told that he was not there and that he was at the Magazine prison. We then went back to the Magazine prison. When we informed the prison guards of this, they confirmed that our brother was not there but at the PH. Since it was late, we left Welikada to get back to Nuwara Eliya as we did not have money to spend for our food if we had stayed that night at the Fort railway station. We went to the prison at 8 a.m and were there till 2.30 p.m. Had they told us that our brother was in the General Hospital we would have gone and seen him before he died,” said Lourthusamy.

“Jesudasan was taken to the Mt. Lavinia Magistrate court for the Wickrematunge murder trial on October 13. It was then that he had collapsed due to a fit. Although the Magistrate had asked the prison guards to take him to the hospital immediately he was brought back to the prison later that afternoon and was admitted to the prisons hospital. Since his condition was serious he was then transferred to the general hospital later in the evening and was admitted to Ward No. 44,” said the source.

When asked whether Jesudasan was an epileptic patient, the source said that he was not aware of his medical condition, but according to some prison guards he had complained of severe headaches often.

When The Sunday Leader visited Jesudasan’s family in Nuwara Eliya not only the neighbours and villagers but also a police constable stationed at a road block closer to the garage where he had worked were grieving at the untimely death of Jesudasan. “He was the most sincere person I have ever met. I have never seen him asking money after repairing a vehicle. He accepted whatever he was given. Always with a smile he was ready to help anyone that came to him even at midnight,” the police officer said.

For them it was a puzzle as to why Jesudasan was taken into custody for a crime he had never dreamt of committing.

The Jesudasan family live at Ruwan Eliya. Their humble home sits perched on a high elevation 3 km away from Nuwara Eliya town. His 78 year old mother and an elder brother are bed-ridden and it was Jesudasan who was the breadwinner. He was the seventh in the family of nine siblings, was unmarried and looked after his ailing mother and brother and the younger sister.

According to the Jesudasan family, they were not aware as to what had happened to their brother since he was taken away on February 27, 2010, until a lawyer from Colombo came forward to appear on his behalf to get him released.

When asked whether the family knew about his connections with an army intelligence officer who too had been taken into custody, Albert said his brother was good with anyone whom he met.

“The police said that my brother had bought five SIM cards and had given them to Wickrematunge’s killers. Why did they say that? Would a person who has not even killed an ant get involved in killing a fellow human being? To be honest it was only after this incident that we came to know who Lasantha Wickrematunge was. We are not educated enough to read his articles or even to see him on TV. Please give our sympathies to the family and tell them that my brother was not involved in killing him. Once I wanted to go to The Sunday Leader office and meet the family and to tell them how innocent we are but I could not do so as I did not have the money for the journey,” said Albert.

Since the breadwinner of the family was arrested, 27 year old Mary had no other options but to leave her bedridden mother and brother alone at home and to find a job. “My other siblings are married and I could not depend on them. I got a job at the diamond factory to keep the hearth burning,” dejected Mary said.

“Only my stomach knows about how many days I have survived with only a cup of tea. I have pawned my jewellery to give money for bus fare to go to Welikada. Now I do not want a marriage and will continue to look after my mother and brother forever,” she said.

According to Albert, Jesudasan had lost his national identity card (NIC) and had obtained a letter from the Grama Sevaka in 2008 to obtain a new NIC.

According to the family, Jesudasan had told the police about this but to no avail.
“Even the Grama Sevaka’s letter was taken away by the police. Now we do not have any document to prove that he had lost his NIC and was trying to obtain a new one,” they said.

It was late in the evening of October 15 that the Jesudasan family has come to know about their brother’s death.

“One of our neighbours had heard the news over the radio and when we told the ‘watte mahattaya’ (A. J. Vithanage) gave us Rs.10, 000 for three of us to go to Colombo. On Sunday October 16 (morning) we reached Colombo and went straight to the hospital. When we went to the mortuary to see Thambi’s (younger brother) body, we were told that they cannot allow us to see the body but to come with the Borella police. Then we asked what the cause of death was and we were told that it was due to a blood clot in his brain,” said Albert.

It was around 2.30 p.m. when the Borella police came to the hospital and the body was released at around 3 p.m. on Monday, October 17. By this time Vithanage’s brother had came and handed the body over to Kelanipura Florists in Punchi Borella. All expenses were met by Vithanage totaling approximately Rs.50,000. The body was brought to Nuwara Eliya early Tuesday morning

A. J. Vithanage told The Sunday Leader that it was a crime for the TID to arrest such an innocent person for an offense he has not committed. “People in Ruwan Eliya knew who Jesudasan was. He was an innocent man who looked after the family with his little income,” said Vithanage.

Speaking to The Sunday Leader, Attorney-at-Law Kaushalya Wijesinghe who appeared for Jesudasan said that the police had failed to inform Jesudasan’s family of his whereabouts, till she first appeared for him.

“I saw this story in a national newspaper and decided to help this innocent family. If I had not came forward to appear for him last year this helpless family would have not known what his fate was till he died,” Wijesinghe said.
Was a postmortem conducted on Jesudasan?
Speaking on condition of anonymity a leading Consultant Specialist queried as to how the hospital came to the conclusion that the alleged suspect in an important murder case had died of a blood clot in the brain.

“This is extremely suspicious. On the one hand he was an alleged suspect in one of the most important murder cases in the whole country and on the other hand is the question of how the hospital authorities could confirm to the bereaved family that their brother had died of a blood clot in the brain or generally known as a stroke, before the postmortem was held.

It is only after a pathological postmortem that the Judicial Medical Officer (JMO) can come to a conclusion as to what the cause of death was. Otherwise no Medical Specialist even with many years of experience can arrive at a conclusion on the cause of death without conducting a postmortem,” the Medical Specialist told The Sunday Leader.
http://www.thesundayleader.lk/2011/10/23/mystery-death-of-sole-suspect-in-lasantha%e2%80%99s-murder/