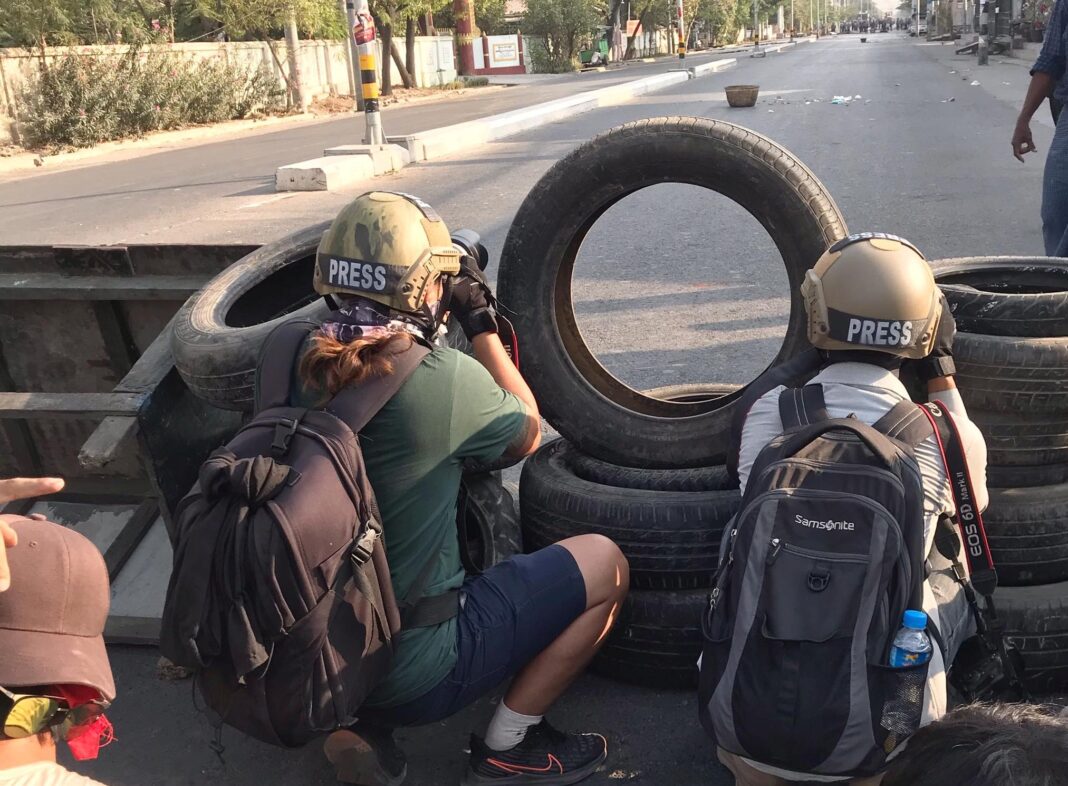 The Myanmar army, police and militia’s use of violence against peaceful protestors reached another level on Sunday, February 28. By 5pm, local media reported at least 19 confirmed killings and another 10 unconfirmed. IFJ spoke to journalists covering the nationwide protests.

Toe Zaw Latt, a video journalist and production director with Democratic Voice of Burma (DVB), is not surprised by the brutality or the extreme force used by the security forces. “It’s their assignment,” he said. “This is what they’re trained to do. Arrest people for exercising their democratic rights. Shoot them, beat them with iron bars, use powerful slingshots to fire bolts, and metal spikes. Use tear gas and fire live ammunition into crowds of unarmed people. They want to silence journalists, but we need to report.”

Toe Zaw Latt was 17 in 1988 when he first faced the military’s violence. He prays the violence in 2021 does not reach the level experienced in 1988 when security forces fired live ammunition into crowds of peaceful protesters, killing thousands. “Thousands of us had to take refuge in neighbouring countries. Protest leaders and other activists were jailed for years, tortured and denied any human rights in prison,” he said

DVB, an independent media company, has managed to keep broadcasting, despite the crisis and enforced country wide military blackouts. “They pulled the plug on us, but we now rely on our satellite being outside the country,”  said Toe Zaw Latt. “We’re managing to operate 24/7 and every two hours we have a 30-minute news bulletin plus our live social media platform.”

In 2021, technology is changing how journalists and protestors record abuses, he says. “Everyone now has a smartphone and everyone can record the military’s crimes against humanity. But I fear for my staff’s security. We are easily identified as journalists by our equipment and PRESS signage, but we are still targeted by security forces because they don’t want their brutality and crimes recorded.”

Protestors and journalists are not the only ones using technology. Security forces are using surveillance tools to ‘live’ track protestors’ locations, listen in on conversations and trawl through computers and phones. Justice for Myanmar, undercover advocates who campaign for justice and accountability in the country, released a number of reports implicating Western companies in the supply of surveillance technology now used by the military to track its pro-democracy opponents.

The Ministry of Home Affairs budget files, obtained by Justice for Myanmar and reported in The New York Times, “indicate that dual-use surveillance technology made by Israeli, American and European companies made its way to Myanmar, despite many of their home governments banning such exports after the military’s brutal expulsion of Rohingya Muslims in 2017.”

Justice for Myanmar spokesperson Yadanar Maung said: “The military are now using those very tools to brutally crack down on peaceful protesters risking their lives to resist the military junta and restore democracy, and to move against journalists who are exercising their right to report on protests.”

Despite military surveillance, arrests and violence, Toe Zaw Latt says journalists seem determined to keep reporting. “It’s challenging for reporters working in these conditions. They [security forces] just start walking into residential streets and start shooting, they’re like mad dogs. Our professional equipment marks us as a target, but we’ll continue to do our job.”

Aye Win, (not her real name) works for an international news agency in a major city, said it’s the unseen violence that worries her the most. “We fear most what we can’t see – snipers and the thought of what they will do to you when they take you to the barracks or jail,” she said.

Gunshots, loud can be heard in the background as Aye Win describes an army truck outside delivering more troops to the area. “It’s now 5.30 pm and it’s not safe to go out. My female colleagues are scared…not of the crackdown, but of the unseen brutality. I worry about my freelancers, they have no protection, media laws are weak. Police have no respect for journalists, if you get too close they grab and steal your equipment.”

Ng Maung has been on the frontline since the coup started on February 1 and has noticed how the security forces’ tactics have evolved. “They have started to remove their identification badges. Our PRESS logo is now a target. Not knowing where snipers are is a huge fear, we now need protection from bullets. If I can see them I’m not scared. It’s not safe to be on the streets at any time. 10 journalists have been arrested already.”

Toe Zaw Latt explained even if journalists work for international agencies or for a small local media outlet or as a freelancer there are no guarantees for their safety or protection of their right to work without interference from security forces. “No one is safe under this military government. We’re all in immediate danger, but at the same time we have to report, we can’t stay silent.”

The Assistance Association for Political Prisoners an independent organization founded and run by former political prisoners reported as of March 1 that 1,213 people have been arrested and 913 remain in detention. AAP said security forces fired tear gas and rubber bullets at protestors and journalists and live ammunition was also fired at residential homes. Reports of security forces looting and robbing have been confirmed by video footage shared by credible sources on social media.

Toe Zaw Latt said people have responded by trying to secure their neighbourhoods. “Residents are blocking the roads to stop the police and army from entering, the community is protecting student protestors. There’s no rule of law in Myanmar, but people are helping activists and journalists with food, refuge and lifts. They treat people battling the effects of tear gas. They have even given us masks to stop the risk of Covid spread. People say the military is a bigger risk than Covid – they’re far more dangerous to the people of Myanmar.”

Phil Thornton is an adviser for IFJ in South East Asia.