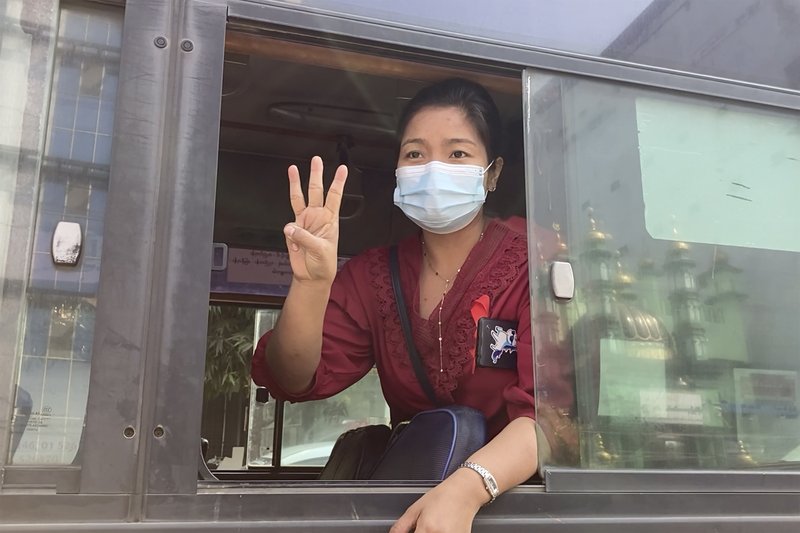 In this image made from video, a woman flashes the three-fingered salute from a vehicle as a crowd of protesters march past Saturday, Feb. 6, 2021, in Yangon, Myanmar. The military authorities in charge of Myanmar broadened a ban on social media following this week’s coup, shutting access to Twitter and Instagram, while street protests continued to expand Saturday as people gathered again to show their opposition to the army takeover. (AP Photo)

YANGON, Myanmar (AP) Myanmar’s new military authorities appeared to have cut most access to the Internet on Saturday as they faced a rising tide of protest over their coup that toppled Aung San Suu Kyi’s elected civilian government.

Netblocks, a London-based service that tracks internet disruptions and shutdowns, said Saturday afternoon that “a near-total internet shutdown is now in effect” in Myanmar, with connectivity falling to just 16% of normal levels.

The broad outage followed Friday’s government order to block Twitter and Instagram that said some people were trying to use the platforms to spread what it deemed fake news. Facebook had already been blocked earlier in the week — though not completely effectively.

The communication blockages are a stark reminder of the progress Myanmar is in danger of losing after Monday’s coup plunged the nation back under direct military rule after a nearly decade-long move toward greater openness and democracy. During Myanmar’s previous five decades of military rule, the country was internationally isolated and communication with the outside world strictly controlled.

Suu Kyi’s five years as leader since 2015 had been Myanmar’s most democratic period despite the military retaining broad powers over the government, the continued use of repressive colonial-era laws and the persecution of minority Rohingya Muslims.

The blockages are also adding greater urgency to efforts to resist the coup, with Saturday seeing some of the largest street protests against the takeover. In what appeared to be the main one, about 1,000 protesters — factory workers and students prominent among them — marched Saturday morning down a main street in Yangon, the country’s biggest city, and were met by more than 100 police in riot gear.

Members of the crowd shouted “Military dictatorship should fall” and “Down with dictatorship.” They marched with their hands in the air, formed into three-fingered salutes, a symbol of defiance adopted from protesters in neighboring Thailand, who borrowed the gesture from the “Hunger Games” movie franchise.

The demonstration ended peacefully with no clashes reported. It dispersed around the time communications were cut, and it was unclear if the marchers later regrouped.

Telenor Myanmar, a major mobile operator, confirmed it had received Friday’s order to block Twitter and Instagram. In a statement, Twitter said it was “deeply concerned” about the order and vowed to “advocate to end destructive government-led shutdowns.”

“It undermines the public conversation and the rights of people to make their voices heard,” its spokesperson said.

Since the coup, social media platforms have been major sources of independent news as well as organizing tools for protests.

For the fourth night Friday, those opposed to the coup and the arrests of activists and politicians that have accompanied gathered at windows and on balconies around Yangon to make a cacophony of noise in protest.

Earlier Friday, nearly 300 elected lawmakers from Aung San Suu Kyi’s National League for Democracy party declared themselves as the sole legitimate representatives of the people and asked for international recognition as the country’s government.

They were supposed to take their seats Monday in a new session of Parliament following November elections when the military announced it was taking power for a year.

The military accused Suu Kyi and her party of failing to act on its complaints that last November’s election was marred by fraud, though the election commission said it had no found no evidence to support the claims.

In New York, U.N. Secretary-General Antonio Guterres pledged Friday that the United Nations will do everything it can to unite the international community and create conditions for the military coup in Myanmar to be reversed.

He told a news conference it is “absolutely essential” to carry out the Security Council’s calls for a return to democracy, respect for the results of the November elections, and release of all people detained by the military, “which means the reversal of the coup that took place.”

Guterres said Christine Schraner Burgener, the U.N. special envoy for Myanmar, had a first contact with the military since the coup and expressed the U.N.’s strong opposition to the takeover.

According to U.N. spokesman Stephane Dujarric, she reiterated to Deputy Commander-in-Chief Vice Gen. Soe Win “the secretary-general’s strong condemnation of the military’s action that disrupted the democratic reforms that were taking place in the country.”

In addition to 134 officials and lawmakers who were detained in the coup, some 18 independent activists were also held, said the Assistance Association for Political Prisoners in Myanmar, which added that some have been released.

The office of Australia’s foreign minister said in a statement Saturday that the government was “deeply concerned about reports of Australian and other foreign nationals being detained arbitrarily in Myanmar.”

The statement said the government was concerned in particular about one Australian who was detained at a police station. The statement did not provide details on the identities of those being held or the reasons for their detention.

On Friday, Suu Kyi’s senior aide, Win Htein, was picked up in Mayangone township. He told BBC in a phone call earlier that he was being arrested for sedition, which carries a maximum penalty of life imprisonment.

Suu Kyi and President Win Myint are also under house arrest and have been charged with minor offenses, seen by many as merely providing a legal veneer for their detention. Suu Kyi was described by her party as being in good health.