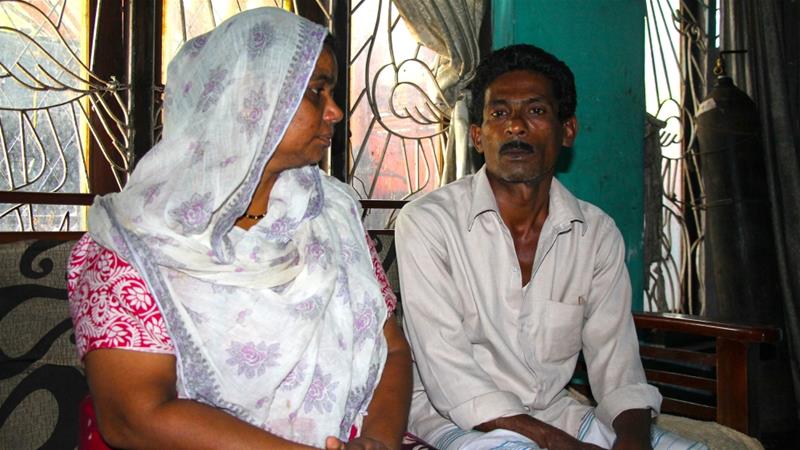 Image; Mazahina, left, pictured with her husband, was arrested over a pattern on one of her dresses which was wrongly believed to resemble the dharmachakra, a Buddhist symbol [Lisa Fuller/Al Jazeera]

by Lisa Fuller & Rukshana Rizwie .
Hasalaka, Sri Lanka – On May 17, police in central Sri Lanka arrested Abdul Raheem Mazahina, a soft-spoken 47-year-old grandmother, because of the pattern  her dress.

The dress’s motifs look like ship wheels, but police told Mazahina, a Muslim, they were arresting her because the pattern resembled the dharmachakra, a Buddhist symbol.

Mazahina, who has asthma and hypertension, had worn the dress many times before and no one had taken notice.

“If it was a dharmachakra, someone would have pointed it out to me,” she said.

Sri Lanka’s Department of Buddhist Religious Affairs later told authorities that they were unable to determine whether the symbol on the dress was in fact a dharmachakra.

Police in Hasalaka – which lies 130km east of Sri Lanka’s capital Colombo – charged Mazahina under a hate speech law, as well as another law that prohibits insulting religions with the “malicious intention of outraging religious feelings”, said her lawyer Fathima Nushra Zarook.

Police spokesman Ruwan Gunasekara told Al Jazeera Mazahina is one of 2,289 people – including 1,820 Muslims – who were arrested “in connection to the Easter bombings or related incidents”, though he confirmed that the charges against Mazahina only pertain to her dress.

Over 250 people died and 500 were wounded on April 21 in a coordinated series of bombings on churches and luxury hotels across the country. the Islamic State of Iraq and the Levant (ISIL or ISIS) has claimed responsibility for the attacks.

While 1,655 of those arrested have been released on bail, 634 are still in custody, either because they have been remanded or they are under investigation, Gunasekara said. 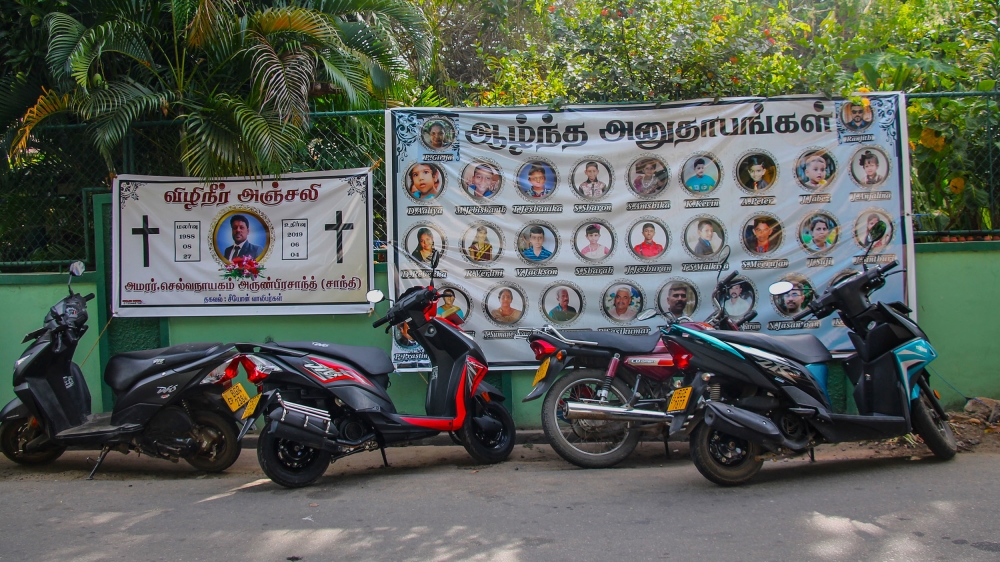 Banners outside Zion Church in Batticaloa, which was bombed, commemorating the victims who died during the Easter attacks [File: Lisa Fuller/Al Jazeera]

“At the police station, the officer in charge made me remove my headscarf and put on the dress while other officers took photographs of me,” Mazahina said, fighting back tears.

During the 17 days that she spent behind bars, guards repeatedly referred to Mazahina as a “terrorist”, she said.

On June 3, a magistrate court released Mazahina on bail, but she has to return to court in November. If convicted, she could face up to two years in prison.

Three quarters of Sri Lanka’s population is Buddhist, while less than 10 percent are Muslim. Hindus and Christians make up the remainder of the population.

Mazahina’s blood pressure increased while she was in prison and she has been ill since returning home. Her husband, Munaf, took leave from his job as a day labourer to care for her. As a result, the family has no source of income.

The Human Rights Commission of Sri Lanka (HRCSL), a government body, has received several complaints regarding arbitrary arrests of Muslims, according to its chairperson Deepika Udugama.

“We are deeply concerned and will write to the acting inspector general of police … with examples of such arrests and the recommendations,” she said.

In a 2017 report, the United Nations Working Group on Arbitrary Detentions said it “identified systemic problems within [Sri Lanka’s] criminal justice system which placed defendants at a high risk of arbitrary detention”.

However, before the Easter attacks, arbitrary detentions targeted ethnic Tamils, who are Hindu and Christian.

Sri Lanka fought a 26-year-long civil war against the separatist Liberation Tigers of Tamil Eelam (LTTE), who fought for an independent Tamil homeland.

When asked if police had any concerns about arbitrary arrests of Muslims, police spokesperson Gunasekara said: “How can I say this? If anyone has an objection, they can complain to police headquarters or the HRCSL.”

He claimed that the police headquarters had yet to receive any such complaints.

On Wednesday, the European Union issued a statement saying that they are “deeply concerned by the political and religious pressure being directed at Sri Lanka’s Muslim community which is undermining peace and reconciliation in the country”.

It is true that the perpetrators of the April 21 bombings were from our community, but from the first day onwards, the Muslim community have assisted the Tri-Forces in rooting out these individuals, yet we have also suffered immensely during this process. – RAUFF HAKEEM, MUSLIM POLITICIAN IN SRI LANKA

Jezima (not her real name), 58, told Al Jazeera that police in Badulla district refused to let her file a complaint after her husband went missing in police custody.

Police asked Jezima’s husband to report to a police station to explain why he had two passports.

Jezima said she was not concerned because there was a simple reason for the passports: one was expired and one was current.

But her husband never came back from the police station and police refused to give Jezima his whereabouts.

After searching for 12 days, Jezima sought help from HRCSL, which tracked her husband to the Criminal Investigation Department (CID) in Colombo.

The CID assured Jezima it would release her husband by June 3. But over a week later, he was yet to come home.

Al Jazeera also spoke to 20-year-old Aslam Rizwi, who had been detained for possessing a damaged SD memory card, and his neighbour 19-year-old Abdul Arees, who was arrested for having footage of the Easter bombings on his phone which he had received on a WhatsApp group.

Sri Lanka Muslim Congress leader Rauff Hakeem, who resigned from his ministerial portfolio last week citing the government’s failure to protect Muslims, said that they were being harassed and detained for trivial reasons.

“It is true that the perpetrators of the April 21 bombings were from our community, but from the first day onwards, the Muslim community have assisted the Tri-Forces in rooting out these individuals, yet we have also suffered immensely during this process,” he said.

The crackdown has been particularly severe in Kattankudy, the east coast hometown of the alleged mastermind of the Easter attacks, Zaharan Hashim.

“Everyone is afraid. So many innocent people have been arrested,” said a university lecturer in Kattankudy, who asked not to be named. “People call the police on us if they think we look suspicious,” he said. 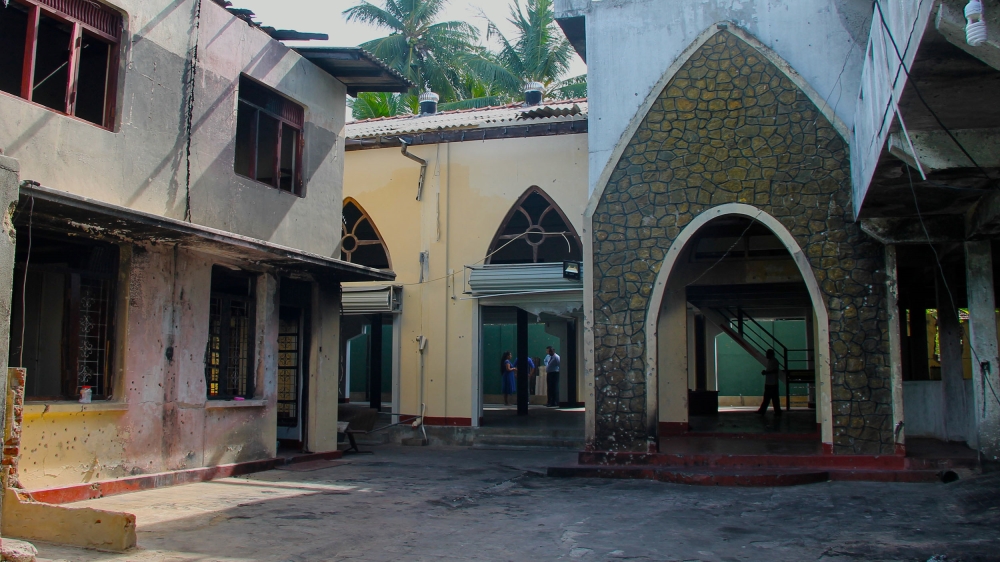 The All Ceylon Jammiathul Ulema, an organisation advocating for Muslims’ civil rights in Sri Lanka, is testifying before the Parliament Select Committee, which is investigating the Easter attacks.

Mufti Rizvi, who leads the organisation, appealed to the committee to take immediate action on increasing reports of arbitrary detentions.