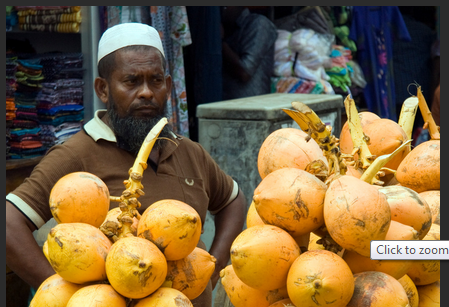 The town of Narammala is a busy, bustling one. Although it lies several kilometres away from Kurunegala, it still abounds with shops, eating houses and banks. But beneath the bustle is a layer of tension. Some 30 Muslim-owned shops received a shocking letter in the post around February 11 – ‘Close your shop by the end of March, or you will die’, the letter said, the word ‘maranawa’ scrawled in red ink.
The letter was signed, Bauddha Sanvidhana Ekathuwa with a scrawled sign resembling a sword. The shopkeepers were afraid to speak, and greeted us with wariness. But every one of them has a copy of that letter close to hand.

As shocking as this incident is, it is by no means the first of its kind. Tensions between the Muslim and Buddhist communities in the area started as far back as a year-and-a-half ago, according to Kurunegala Municipal Councillor, Abdul Sattar.

In a town called R. S. Sinhalawatte, where 30 to 40 Muslim families lived, there was a small mosque constructed (at least 25 families need to be living in an area for a mosque to be built) Sattar said. However, the trustee of the nearby Aluwihare Temple had said that the families could not worship at the mosque, as they had no license to do so. The matter was peacefully resolved, but that was not the end. 15 kilometres from Kurunegala, people began to clamour for the closure of the Deduruoyagama Mosque, even though it had been registered with the Department of Muslim Affairs. A group of monks had gathered in front of the mosque and begun to chant pirith. The frightened Muslims went to the Wellawa Police, who handled the issue.

All was well until the January 24 protest in Kuliyapitiya, when people carried effigies denoting Prophet and placards depicting pigs, in an inflammatory riot. Next in Horombawa, a retired Muslim teacher was beaten as he was walking along the road. Another was followed, when he got on a bus, and assaulted. All these incidents boiled up to the Narammala letters received in early February. The residents had at first been afraid to approach police, thinking that it might worsen the situation. However, the ominous deadline given pushed them to lodge a complaint.

Azad runs a jewellery shop in Narammala. He said that he received the threatening letter on February 12 – the letter arrived without a seal indicating where it had been posted from. The police had visited his shop and had taken the original letter. Three days later, a meeting was held, attended by the head monks in the area. They had told the Kuliyapitiya Assistant Superintendent, who attended the meeting, that there was no organisation known as Bauddha Sanvidhana Ekathuwa in Narammala. Azad was fearful, but determined not to close his shop.

Not far off is a gold bullion shop owned by Jalil. He said he believed the same organisation that had sent the letters had also carried out the attack on the Muslim man who was travelling by bus. “Yes, we are frightened,” Jalil said, but he too said he would not close his shop. The CID had visited him over five times, he added. His letter had borne a Kurunegala stamp, he said. Anfas has been running a small vegetable shop in Narammala along with his father – the shop has been here for 35 years or so. He said he had never heard of the organisation, which sent the threatening letter to him. Their letter also bore no seal. While Anfas was fearful, his father was more pragmatic about the situation.

Shortly after the letters were issued in Narammala, some shops and small roadside hopper stands were damaged by an unknown group near Siyambalagaskotuwa, at the Kilipola junction. Rafeek, whose hopper stand was badly damaged, indicated the shattered glass of his stand. “They came at midnight,” he said, adding that as his shop closed at 9 PM and he had no idea who the perpetrators could be.

Police had come and examined the stretch of road – damage had been inflicted to the Muslim-owned shops all along the stretch, Rafeek said. “This is the first time that something like this has happened,” Rafeek said, adding that even the Sinhalese families in the area had been surprised as well. Yet, when asked if the shop owners thought the perpetrators could be from outside of town, Rafeek said he did not believe this could be so.

The shop owners and even people drinking tea at the shop were suspicious of the press, asking how we had come to know of the incident, begging us not to take pictures of their faces, and saying the issue had already been resolved by the police. Perhaps, this could be because they were afraid of spreading the poison caused by the issue – Sattar said he noticed even young children were asking not to eat halal products – he had even seen school vans bearing ‘no halal’ signs. “We are scared that something will happen as in 1983, when so many people were killed – that an incident happening in one place might spread everywhere,” Sattar said, adding “If this happens, we can’t face it – we don’t know what will happen.”

Sattar also said that contrary to propaganda, the Muslims considered Sri Lanka their home. “Even if they hit us, or tell us to leave, we cannot leave. This is our home, even if we die overseas, our bodies would be brought back here,” Sattar said.