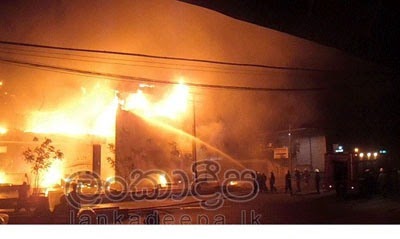 Anti-Muslim violence in what were once idyllic tourist spots on the southern Sri Lankan coast has once again Muslim-owned store, mosque targeted in Sri Lanka
A Muslim-owned apparel store was found ablaze late on Friday, causing concern in the island nation that witnessed violent clashes between a Buddhist group and residents of a Muslim-majority town along its south-western coast less than a week ago. Police said they were probing the incident, and that they did not rule out arson at the upmarket No-Limit store in Panadura, nearly 30 km south of Colombo. Though six persons, including two guards, were at the store at the time of the incident, they escaped unhurt.
Meanwhile, reports from Jaffna, in Sri Lanka’s Tamil-majority Northern Province, said a mosque in the busy Navanthurai area was attacked late on Friday reportedly by unidentified persons.
The prayer room used by Muslim students of Jaffna University was also found attacked a couple of days ago, sources said. Media persons reporting from the area said the incident followed a show of solidarity by a section of students, in support of victims of the Aluthgama clashes that shook the island on Sunday. When contacted, University Registrar V. Kandeepan said there was “no major” incident on the campus. Jaffna SSP W.P. Wimalasena on Saturday said the police had received no complaint in this regard.
“In any case, we don’t intervene in the University’s internal matters. That is the instruction we have got from the security authorities,” he said, about a month after Jaffna University teachers and students complained of threats from security personnel against any commemoration of people who lost their lives during the war.
Following the violent clashes in Aluthgama and Beruwala on Sunday, which claimed four lives and injured nearly 80, many shops across the country observed a hartal. Reports said Muslims even cut short their Friday prayers this week following the religious tensions.
The issue also sparked a heated debate in Thursday’s cabinet meeting in Colombo, it is reliably learnt.
Ministers Rishad Bathiyutheen and Rauf Hakeem, who are with President Mahinda Rajapaksa’s ruling coalition, urged him to take action on the hard-line Buddhist organisation Bodu Bala Sena, whose leader Gnanasara Thero made a provocative speech against Muslims in Aluthgama on Sunday. However, sources present at the meeting told The Hindu that the President said no action would be taken on the organisation, for its members “would become heroes” then. The Sri Lankan government has, so far, not released any official statement condemning the violence or the organisation said to have a role, except for tweets from the President. On Saturday, President Rajapaksa tweeted “I will be appointing a high-level panel to inquire into recent disturbances.”
Following strong statements from some Western countries, Sri Lanka’s permanent representative in Geneva briefed the Human Rights Council of the situation, observing “extreme elements on both sides are being addressed by the Government,” in its statement that was silent on Bodu Bala Sena’s rally in Aluthgama on Sunday, which preceded the violence.