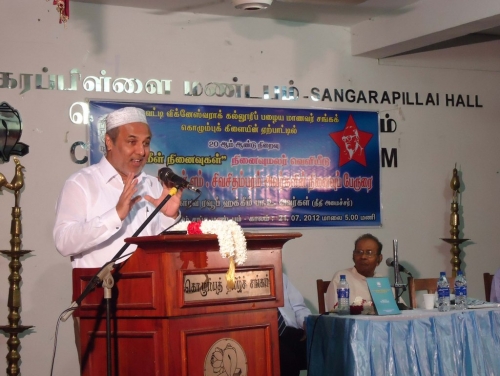 The Tamil political landscape with the exclusive Tamil Congress and the emerging alternative voice of the Federal party had great legal luminaries as GG Ponnambalam and SJV Chelvanayakam.

The Late Sivasithamparam was a unique blend of all these greats filling the knowledge gaps and emerging as a personality in his own right. That is the picture I glean from rereading his work.

Annan Siva’s entry to politics commenced in 1956. He contested as an independent candidate in Pariththithurai, against his teacher Pon. Kanthaiya who represented the Communist party.
Although Annan Siva failed to win this election, his subsequent enrolment in the Tamil Congress and the services he rendered through this party in the 1960s was extraordinary. In March 1960 elections, he scored an impressive victory in the Uduppidy electorate. He repeated his equally triumphant success in the July 1960 elections that followed.

He served as the Deputy Speaker of parliament in 1967. In subsequent years, despite his membership in the Tamil Congress and the differences between his party and the Tamil Arasu Katchi, he championed the cause of the Tamil people. His life was a sincere commitment to a non-violent struggle to achieve his goals.
We have all been deceived by national leaders at different points of time. However, nobody was more deceived than the Tamil Leaders. Even if they were determined not to be deceived any further, we keep witnessing how history has always bestowed tragedy on them. This is a phenomenon that can be seen throughout the 50s, 60s, 70s, 80s and 90s.

In the General election of March 1960 political speculation was that the UNP had surreptitiously tried to convince the Governor General that it had the support of the Tamil Arasu Katchi and to call Dudley Senanayake to form the government. This was referred to recently by Professor Pathmanathan in his Chelvanayagam commemorative oration. 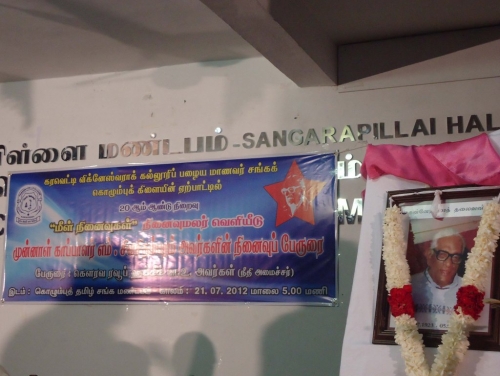 The government of Dudley Senanayake lost in the debate on the throne speech. Following this in those times of political uncertainty, talks were held with the Tamil Arasu Katchi by the Sri Lanka Freedom party that was headed by C P D Silva with Sirimavo Bandaranaike widow of the slain Prime Minister entering politics. There were many understandings reached by the two parties.

The important decision was on the Tamil language implementation policy where a consensus was reached. Thanthai (father of the Tamil Rights Cause) Chelva with his four point demands, campaigned in the South as well. We have a history of even the SLFPers cheering and applauding him all the way to parliament. However, Madam Srimavo Bandaranaike did not keep her promises. Instead, the government insisted that the courts in the Northeast too had to function in the Sinhala language.

Protests then erupted against this measure. The first satyagraha protest was held opposite the Jaffna Kachcheri. Thanthai Chelva, Mangayakkarasi and many others were arrested and taken to Panagoda. Dr. E M P Naganathan escaped arrest. Annan Siva’s participation in the struggle was apparently not known to the government. There was no arrest warrant issued on him. At this point he faced physical and mental trauma. Rumours spread that he was dead.

However, he carried out civil disobedience with an alternate postal service and personally hand delivered letters by bicycle even to the Post Master. It shows that his personality was different and his dedication to the non-violent struggle was no ordinary gesture. He continued his politics of protest until when Dudley Senanayake allied with Tamil Arasu Katchi to form government in 1965. Annan Siva was then elected Deputy Speaker.

In the 1970s, nobody really represented the Tamil Congress in parliament. Annan Siva and GG Ponnambalam had both lost at elections. The first Republican Constitution was adopted. When there were pleas made to at least include some symbolic federal features in the new constitution after the Navarangahala event , the pleas were totally denied.

It was this event that compelled the Tamil parties to shed their differences and unite to pursue the same cause. Annan Siva was mostly instrumental in uniting these parties that were always in conflict.
In the same light, we find that cleavages in the Tamil national politics being removed today. Annan Siva’s role in bridging and uniting opposing parties in the pursuit of an agreed objective must be well remembered and celebrated.

Tamil United Liberation Front came into being in the twilight days of Thanthai Selva. The Vaddukkottai Declaration was made. Annan Siva and Annan Amirthalingam made great compromises and sacrifices to share the leadership of the party.

With the passing away of S J V Chelvanayagam and G G Ponnambalam, two towering personalities were removed from the Tamil political scene. The events that followed were tragic. With the assassinations at the Buller’s Road residence of stalwarts like Annan Amirthalingam and Yogeswaran, Annan Siva who was also wounded at the shootout, took on the responsibility of leading the Tamil struggle although permanently confined to a wheelchair.

The very seditious movement that tried to assassinate him honoured him with the title “Maa Manithar” (Great human being) on his way to the Sonappu grave.

When the UNP commenced peace talks with LTTE, I resigned my Ministerial office and made a sacrifice to support its endeavours. When the ceasefire agreement was signed between the LTTE and the government I expressed my strongest disagreement with that position.

I confronted the government, India and also the international community on the manner in which the Muslim community was treated in the process.

Annan Siva’s sacrifices in the 1983 riots were mentioned here briefly. He was one of those who refused to take oaths over the 6th amendment to the constitution. He had to sacrifice his legal practice and profession to uphold his ideological convictions. He left the country for India.

From 1983 to mid-1990s he contributed immensely to keep a dialogue moving with Prime Ministers Indira Gandhi and Rajive Gandhi. Together with Annan Amirthalingam and the leader of the Tami National Alliance Annan Sambanthan he played a vital role.

The mandate received by the government in 1970 helped establish a Republican Constitution. It was drafted and adopted with a two thirds majority in the Constituent Assembly

However, it was not a mandate that included the Tamil people. In comparison, the sweeping mandate the Tamil speaking people gave the Tamil United Liberation Front in 1977 and the people’s verdict given at the 1977 election bears testimony to the validity of the constitution that was introduced in 1970 and in 1978. Political analysts and commentators have made observations on this aspect. They may continue to do today. Many may even fear to do so.

It is symbolic of the changing dynamics of Tamil nationalist politics of the day. They were greatly affected by this trend. They did not believe in merely filling up national list positions on offer.

Nevertheless, Tamil people pressured them to do so. There were occasions when they participated in parliamentary affairs. But, Annan Siva was no simple politician although he was accorded this avenue of entry to parliament. In 1977, Annan Siva gave up his electorate to another candidate on behalf of his alliance.
It was mainly due to his determination to prevent caste structures to be a curse on Tamil politics.
He circumvented this barrier by sacrificing his Uduppiddy seat. He moved to Nallur, and made unprecedented history by winning in this constituency which was completely new to him. The fact that he got the highest number of preferential votes of 28,700 in the country while not contesting from his home turf demonstrated to the world the strength of his political personality.

I see myself sharing similar constraints such as those faced by the likes of G G Ponnambalam and M. Sivasithamparam. History no doubt will pass judgment someday. Thanthai Selva after 1965 experienced the same dilemmas and constraints.

When M Thiruchchelvam was the Minister of local government, a controversy was raised over the declaration of a sacred area around Konneswaram Temple. They emerged unscathed by resigning from the government over the issue. If they did not, they would have faced a great deal of inconvenience like us.
Muslim Nationalism has many lessons to learn and be informed by Tamil nationalism. The personality clashes and contradictions among these stalwarts are lessons in themselves for all of us.
(Excerpts from Murugesu Sivasithamparam memorial lecture delivered by Justice minister and Sri Lanka Muslim Congress leader Rauf Hakeem at Colombo Thamil Sangam hall under the auspices of past pupils association of Vigneswara College,Karaveddy)
DBS