Muslim hardware shop was burned Down in Mawanella; Rishard condemns 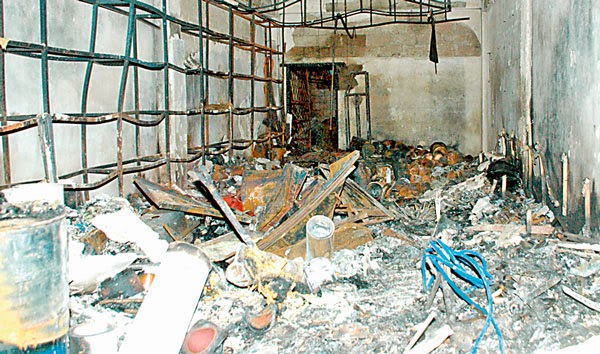 It is reported that a hardware shop belonging a Muslim man was set on fire last night by unidentified people in Mawanella town. Muslims in the area believe that this was done deliberately by some anti- Muslim elements. This follows series anti- Muslim attacks and anti- Muslims campaign started by BBS two years ago. These continuous attacks on Muslim properties and Muslim places of worship are aimed at destroying Muslim business and Muslims livelihood in Sri Lanka.
It is a worrying trend. This government is deliberately ignoring this anti- Muslim campaign of BBS. It has not taken any action against it. It is generally believed that government is perpetrating all these attacks behind the scene. JVP leader recently said this openly and yet, our Muslim MPs knowing or unknowing do not take any actions. They do not have courage to crossover from this ruling party and sit down with opposition as a protest.
I personally believed that ineptitude and incompetence of our politicians is one of the main reasons for this pathetic situation of Muslims today. I understand that BBS has put them in a difficult situation and yet, what is the point in sitting with this government that does not care what is happening in the country and what is point in sitting with this government that perpetrates this mayhem.
Just a week ago a Muslim shop was burned down in Aluthagama. Within a week this shop was burned down. This series of attacks started with fashion bug attack sometimes ago. This government has not been taking any actions against the culprits and it has encouraged these anti- Muslims trend to increase and continue. I think that this government should take responsibility to these attacks and it is failure of this government to take action that give boosting to this racist people to increase their attacks on these innocent people.
I think that government should tell public that it will compensate these loses from public money.
There is no system of insurance for small business people in Sri Lanka. Hence government should compensate these victims either through presidential fund or local government funds. Business people in Sir Lanka pay income tax and they should be compensated for that reason. That is the only way to teach a lesson to these anti-social elements.
Although these are privately own shops these thugs are destroying national wealth and properties of Sri Lanka. These people are damaging ecosystem and environment of this beautiful country. Whether you destroy the properties of Muslims or Tamils it is national wealth that you are destroying. What you are doing is not good for your country. If this trend continues this could harm Sri Lanka economy and it could affect Sri Lanka tourism industries. If this trend continues it could damage good name of Sri-Lanka internationally and even it could damage Sri Lankan diplomatic relations with some Muslim countries.
It should be noted here that 95% of Sinhalese are peace loving good people and this type of racist attack tarnishes good name of those 95% peace loving good people. It would be wrong to generalise these attacks and yet, there is a small numbers of anti- Muslim elements operating in Sri Lanka. It is a duty and responsibility of any responsible government to take strong action against those who perpetrate these attacks. Government officers should apply rules of law equally to all without bias and prejudice. Otherwise, what is the point of having government, police and courts in Sri Lanka?
I think that it is a moral duty and responsibility of religious leadership of this country to speak out strongly against this injustice. Of course, there have been some strong voices against BBS from Sinhalese community. Many politicians, academics, Monk and journalists from Singhalese spoke about this problem recently and they should come out with some strategies and mechanisms to completely wipe out this social cancer from Sri Lanka. This is the time to think how to build Sri Lanka not initiate conspiracies to destroy Sri Lanka. These anti-social elements are really enemies of Sri Lanka and indeed they are not patriotic Sri Lankans at all.
Courtesy – Sri Lanka Gaurdian
Rishad strongly condemns burning of Muslim shop in Mawanella
Says the act is very dangerous; requests prompt action from Police
Minister of Industry and Commerce Rishad Bathiudeen yesterday said that he condemns the torching of a Muslim-owned business in Mawanella on 18 May, while visiting the scene of the crime on Sunday.
Minister Bathiudeen said: “The hardware shop owned by a Muslim in Mawanella was torched on 18 May. When I visited the location of the incident, the Muslims of the area informed me that this was an intentional act by anti-Muslim elements to create tension between communities. I have instructed the Police in the area to take necessary action and to forward the incident to the Government Analyst immediately. We also call on the authorities to initiate immediate action and investigations to find the offenders. There have been several such acts in various other parts of the country targeting Muslim businesses. Such acts appear to be instigated in order to destroy the valuable peace that dawned in the aftermath of the 2009 victory of President Mahinda Rajapaksa. My party and I, the ACMC, strongly condemn this dangerous act.”