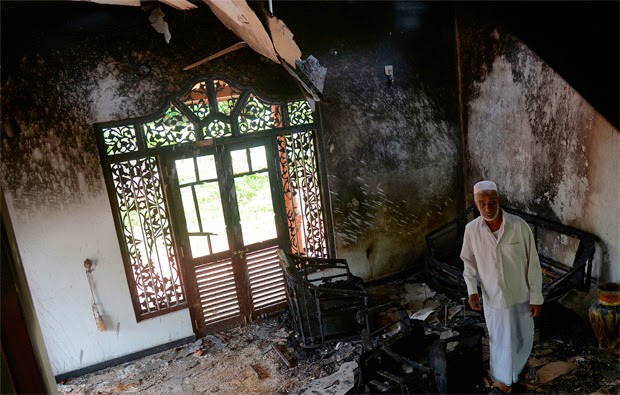 The Muslim Council of Sri Lanka calls to immediately investigate the actions of all extremist groups and ban those who have been carrying out a campaign of hate, intimidation and violence against Muslims, Christians and other religious minorities.In a letter to the President, the Muslim Council said that recent incidents have heightened fears that violence will spread and that Muslims will come under attack, resulting in deaths and injuries, the destruction of businesses and homes, and the mass flight of Muslims from their homes and communities.
The Muslim Council of Sri Lanka /19th June 2014
His Excellency Mahinda Rajapaksha, President, Democratic Socialist Republic of Sri Lanka

The Muslim Council of Sri Lanka calls upon your Excellency to immediately investigate the actions of all extremist groups and ban those who have been carryout a campaign of hate, intimidation and violence against Muslims, Christians and other religious minorities. The incitement and provocations have been well documented and are available in the public realm. The consequences as witnessed in Aluthgama and Beruwela this week, but also during periodic flare-ups in several other places, have been dire.Appeals made to the police and other authorities by several Muslim groups and the Muslim politicians to stop the rally in Alutgama that preceded the attack wasnot heeded.  We feel that it is necessary and urgent that the climate of impunity with which these groups have been permitted to act thus far is challenged. We urge decisive action by your Excellency’s Government to restore and uphold the rule of law in this country. It is necessary that a culture of respect for ethnic and religious tolerance– a part of this country’s rich and ancient heritage –is endorsed and encouraged at the highest levels. Five years after the end of the war as this country attempts to strengthen peace, democracy and development under your leadership, this violence and hate threatens to undermine the stability that serves as the foundation for the progress of Sri Lanka.
The BLACK June 2014 for Muslims in Aluthgama and Beruwela reminds us of the black July of 1983, where thousands of Tamils lost lives, livelihood and their properties. The recent incidents have heightened fears that the violence will spread and that Muslims in other areas will come under attack, resulting in deaths and injuries, the destruction of businesses and homes, and the mass flight of Muslims from their homes and communities.Immediately after the pogrom in Aluthgama,extremists had organized a rally in Mawanella on the 18th with provocativemessages on leaflets. It was with a court order that the rally was stopped. On the 17th,a rally was organized in Badulla which led to damages to two shops.Organizing these rallies during the troubled times shows the intention of the extremists. There has been a strategic build up to this violence during the last two years by the Bodu Bala Sena, the Sihala Ravaya and the Ravana Balakaya. Your Excellency, the violence in Aluthgama and Beruwela is not something that happened spontaneously, but was a well planned and coordinated assault to attack the Muslim community and their economic base.
Extremists continue to inflame and incite violence against the Muslims and other religious minorities, and this must be stopped. It is important that, under your Excellency’s able leadership, Sri Lanka will not repeat the same mistakes of July 1983. This country cannot continue to witness private feuds being turned in to racial violence. Therefore we urge you to commence an investigation into these groups’ activities, including into the hate speech, inciting violence and direct involvement in violence, and ensure that they function within the law of this country.  We also urge your Excellency to ban any group that continues with hate campaigns and inciting violence.
The Muslim community are committed citizens of this country and your Excellency’s decisive and immediate action at this juncture will reinforce their faith in your Excellency’s resolve to ensure that all communities will be treated as equal citizens of this, our blessed nation.
Thanking you for your kind consideration.
Yours sincerely
N M Ameen
– Eye Sri Lanka
Share
Facebook
Twitter
WhatsApp
Pinterest
Email